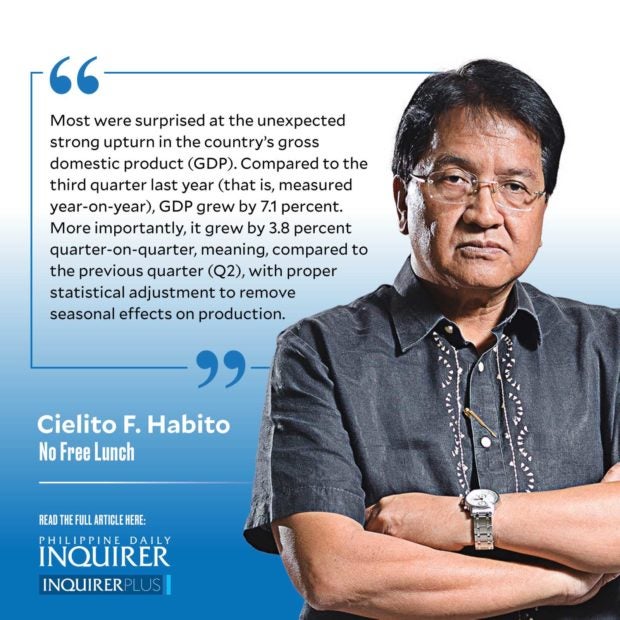 I was wrong about how the economy would fare in the third quarter (Q3) this year. And like most everybody else, I’m glad I was. Most were surprised at the unexpected strong upturn in the country’s gross domestic product (GDP). Compared to the third quarter last year (that is, measured year-on-year), GDP grew by 7.1 percent. More importantly, it grew by 3.8 percent quarter-on-quarter, meaning, compared to the previous quarter (Q2), with proper statistical adjustment to remove seasonal effects on production.

Without such adjustment, Q3 production in any year may be biased downward as levels of activity could be hampered by less favorable weather during the rainy season, for example. The seasonally adjusted GDP figure, which is actually also routinely reported by the Philippine Statistics Authority (PSA), would compensate for this with an upward adjustment to correct for that particular seasonal bias. There may be other recurrent seasonal biases due to other factors, for which statisticians have tools to distill out of the data. Thus, the “seasonally adjusted” quarterly figures can be directly compared across quarters to reveal “pure” growth (or contraction) in the economy, on a more real-time basis than the year-on-year growth rate could show. As I have already explained before (“We are not out of recession,” 8/17/21), the latter can be particularly misleading when there are abnormal drastic dips or surges in GDP, as what happened last year due to severe lockdowns imposed in response to the COVID-19 pandemic. With an abnormally low (or high) base to compare with in the previous year, the year-on-year growth rate can look unduly high (or low) due to the “base effect.”

That is why I described it as misplaced jubilation when the announcement of the seemingly impressive 11.8 percent Q2 growth in mid-August was generally met with a celebratory mood. Even as news stories blared that the recession was over (because it was the first positive GDP growth rate we’ve seen since 2019), I pointed out that the economy actually contracted then, with the quarter-on-quarter seasonally adjusted growth rate actually negative at -1.4 percent (as revised).

Because the Q3-2021 year-on-year GDP growth rate was 7.1 percent, several reports I saw wrongly described it as “weaker” than Q2. In actual fact, it was the reverse, as the economy grew positively by 3.8 percent over the Q2 level. And here lies the surprise that hardly anyone expected. The third quarter actually saw a return to the tighter enhanced community quarantine (ECQ) for key COVID-19 hotspots including Metro Manila and surrounding areas, after already being at the looser general community quarantine (GCQ) in June. Thus, I fully expected in August that seasonally adjusted Q3 GDP level would fall even further from the Q2 level. The resurgence of unemployment to 8.1 percent in August and up further to 8.9 percent in September, against 7.7 percent in May and June, also suggested a more restrained economy in Q3, further bolstering my expectation of a contraction.

But lo and behold, seasonally adjusted GDP actually reversed the previous quarter’s decline and expanded by 3.8 percent quarter-on-quarter, even as the 7.1 percent year-on-year growth made it appear weaker than Q2’s 12 percent (as revised).

So what led to the surprise? The PSA cited wholesale and retail trade, transport and storage, and professional and business services as key drivers of quarter-on-quarter growth. Wholesale and retail trade, manufacturing and construction drove year-on-year growth. It’s also worth noting that agriculture fell 1.0 percent in the first three quarters only because African swine fever made livestock production fall by a deep 19.7 percent. Without livestock, agriculture actually grew at 2.2 percent. All told, I would attribute the surprise to how ECQ as enforced in 2021 is very different from ECQ circa 2020. Hence, tightened quarantine levels in Q3 did not translate to a tightened economy after all.

With the restrictions having since been eased even further, the economic outlook seems even more promising—for as long as we can keep the virus from surprising us again.