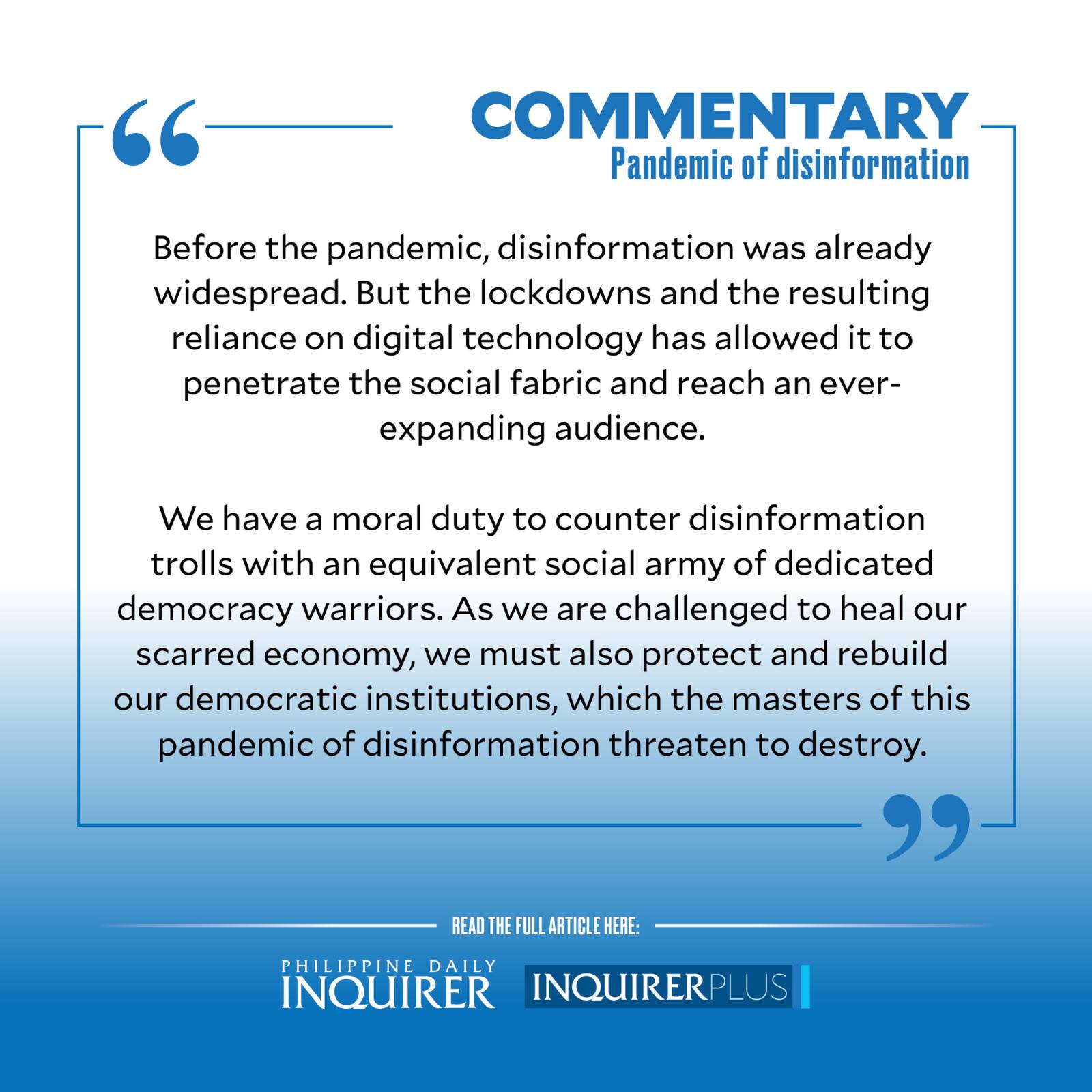 Here and elsewhere around the globe, another pandemic threatens to destroy our way of life. Disinformation is an insidious instrument that deprives people of their right to credible information. It dispossesses them and diverts their attention from pressing public issues.

The Council of Europe defines disinformation as information having false, manipulated, and fabricated content. The use of disinformation has entrenched authoritarian leaders, silenced citizen participation and oppositional voices, inculcated fear, and further marginalized the vulnerable segments of the population.

Before the pandemic, disinformation was already widespread. But the lockdowns and the resulting reliance on digital technology has allowed it to penetrate the social fabric and reach an ever-expanding audience.

In the first year of the pandemic, the government’s optimistic narrative that life would go back to normal by December 2020 morphed instead into a protracted lockdown as the country reverted to enhanced community quarantine in March 2021, and then again in August 2021, subjecting a vast majority of the population to waves of hardship.

Diversion and deflection seem to have been the default tactics for the past five years. Blame-shifting, the politics of avoidance and appearances, intimidation and threats, populist rhetoric, and whimsical tirades promoting divisiveness have been the norm instead of statesmanship and moral uprightness.

The recent Senate blue ribbon committee hearings have revealed how erring, incompetent, and possibly corrupt officials are being protected by the government, to the extent of the Palace challenging the system of institutional checks and balances established by our Constitution.

Yet another glaring form of disinformation is to sanitize the ill intentions of China. Public opinion of China has consistently remained negative over the years. Since 2016, however, the Duterte administration has heralded China as a “friend,” totally undermining our country’s victory in the Permanent Court of Arbitration in The Hague. Defending the West Philippine Sea and fighting for our maritime rights has been downplayed by the administration. During the pandemic, China’s image was boosted by the propaganda that Sinovac donations exemplified its goodwill toward the Filipino people.

Corruption and the West Philippine Sea issue, however, have become top-of-mind concerns among Filipinos.

Today, scheming candidates use social media platforms like YouTube as the primary instrument of disinformation to distort established historical facts, and spread all kinds of fake news. Certain candidates, in particular, employ hundreds or even thousands of fake followers and disinformation agents to inflate their standing on social media.

Filipinos deserve better than this sorry state of affairs. We should expose the people who spread disinformation, and more so the people who stand to benefit from fooling and miseducating the public.

We need to highlight the need for—and our right to—proper, correct information. This should compel all candidates to abide by the rules of transparency and decency.

Civil society should likewise work to uphold information integrity in the coming elections. According to the Consortium for Elections and Political Process Strengthening, “The role of civil society in fighting disinformation is multifaceted: fact-checking, digital forensics and research, advocacy to governments, advocacy to platforms, digital literacy campaigns, reconciliation, and international cooperation.”

We have a moral duty to counter disinformation trolls with an equivalent social army of dedicated democracy warriors. As we are challenged to heal our scarred economy, we must also protect and rebuild our democratic institutions, which the masters of this pandemic of disinformation threaten to destroy.

Dindo Manhit is the founder and managing director of Stratbase Group.