Guns in the classroom 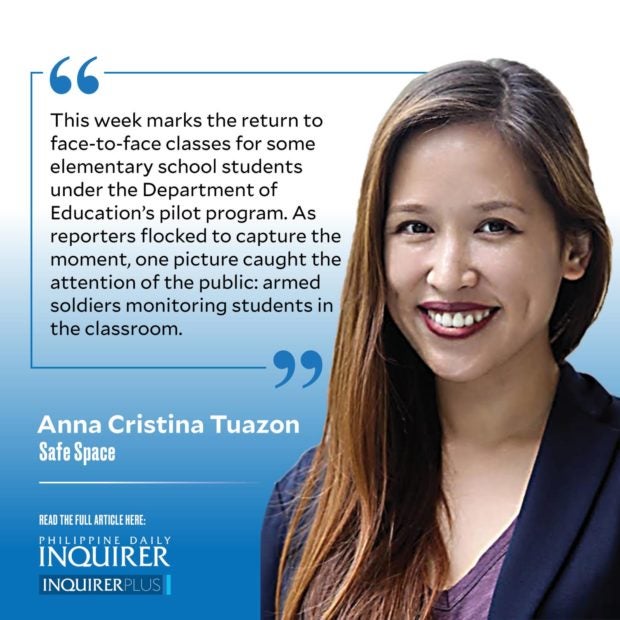 This week marks the return to face-to-face classes for some elementary school students under the Department of Education’s (DepEd) pilot program. As reporters flocked to capture the moment, one picture caught the attention of the public: armed soldiers monitoring students in the classroom. Under DepEd’s National Policy Framework on Learners and Schools as Zones of Peace, “schools, as a general rule, should be free from the presence of armed combatants, whether they be from government forces or armed groups. Armed force protection units from government forces, if needed, shall be situated proximate to the school and not inside the school.”

Many steps had to have happened for such a dangerous lapse in safety to occur. First, the adults in this situation were, at the very least, ignorant of the rules. Second, even with the assumption of ignorance, they were terribly inconsiderate about the general safety of the children. The entire pilot run is focused on keeping children safe as they return to the classrooms—and they didn’t think twice about bringing in guns? What this tells us is that our concept of “safety” has severely narrowed. We have been so single-mindedly focused on COVID-19 that we have disregarded everything else. We have forgotten that there are other threats to our children’s safety. We seem to have the same attitude with our children’s health. We are more than willing to keep children locked up inside their homes. (President Duterte has once again urged to ban children 12 years and below from public places, a knee-jerk reaction from seeing the crowds at the malls. There are better ways to address the situation, as I have written about last week.) We are more than willing to sacrifice children’s overall development and mental health for the offered promise of safety.

Third, we have normalized military presence in our everyday lives. We no longer question why we have military checkpoints instead of public health personnel to enforce public health protocols. We think it makes sense to arrest quarantine violators and put them in crowded cells instead of simply ushering them back to their homes. In UP, we have fought hard to protect the DND-UP Agreement that prohibits military and police from entering our campuses without permission even as the defense secretary himself didn’t see anything wrong with military presence in an academic environment. It’s one thing to question protections for institutions that, for political reasons, you don’t think need protecting. It’s quite another thing to see a picture of armed soldiers in an elementary school classroom. It suddenly becomes painfully obvious why there is no place for the military in schools. The fact that netizens decried the presence of armed soldiers in classrooms is a big relief. Apparently, there is still a line that Filipinos are not willing to cross.

Political scientists know that when citizens are willing to trade in freedoms for a sense of safety is the moment when tyranny and abuses can occur. A global pandemic is ripe for this: it is a prolonged crisis that tempts citizens to give away unchecked powers in exchange for the illusion of safety.

In child protection, we get vigilant in times of disaster and crisis. When children are ordered to stay home, you are assuming that home is a safe place. In my field, we know that, for others, this is far from the truth. By staying home, some children are locked inside with their abusers. School then becomes a secondary place where children can feel safe—and where teachers can monitor for any signs of abuse and harm. Keeping the school safe is of paramount importance because for some children, it is the ONLY safe place.

When we talk about safety, we almost always pertain to physical safety whether it be physical environments or physical health. What we strongly need to consider is establishing psychological safety. It is not enough just to put ourselves in plastic or acrylic boxes to feel safe from viruses. Psychological safety is when we feel confident and safe enough to be ourselves. We feel that it’s safe to ask questions or offer a different opinion. We feel safe to pursue advocacies and career paths of our own choosing. We feel safe to make mistakes and learn from them.

We must never make compromises when it comes to our genuine safety. It is not just safety from the virus that we need to be mindful of; we need to feel safe from all sorts of physical and psychological harm. To be genuinely safe is to keep our physical safety without changing who we are both as individuals and as a nation.