Notes on a scandal

The case of Romulo Neri, former holder of important government posts and now barred for life by the Supreme Court from public service, is a cautionary tale revolving on a dilemma: refusal to reveal matters deemed confidential, as against the wisdom of disclosure, particularly if these matters involve not only national interest but also personal principle.

Promulgated in July but made public only last week, the high court’s ruling on Neri involves the NBN-ZTE scandal that shook then-President Gloria Macapagal Arroyo’s administration and that continues to provide lessons on executive power and privilege.

An unsolicited proposal submitted by China’s ZTE Corp. in September 2006 to install a national broadband network (NBN) linking government agencies nationwide quickly turned questionable for irregularities and claims of corruption. With Arroyo as witness, the $329-million contract was signed in China by then Transportation and Communications Secretary Leandro Mendoza and ZTE vice president Yu Yong in April 2007 — a time when the Philippine government was prohibited from signing contracts because of the then-upcoming elections. The project that required the grant of a loan from China had no benefit of bidding and soon became controversial.

On Oct. 2, 2007, in the heat of blistering public criticism, Arroyo canceled the contract. But the controversy did not die. At the inquiry conducted by the Senate blue ribbon committee on the strength of a resolution filed by Sen. Aquilino “Nene” Pimentel Jr., the names of prominent men including Arroyo’s husband Mike Arroyo and then Commission on Elections chair Benjamin Abalos Sr. were mentioned in allegations of bribery and intimidation. 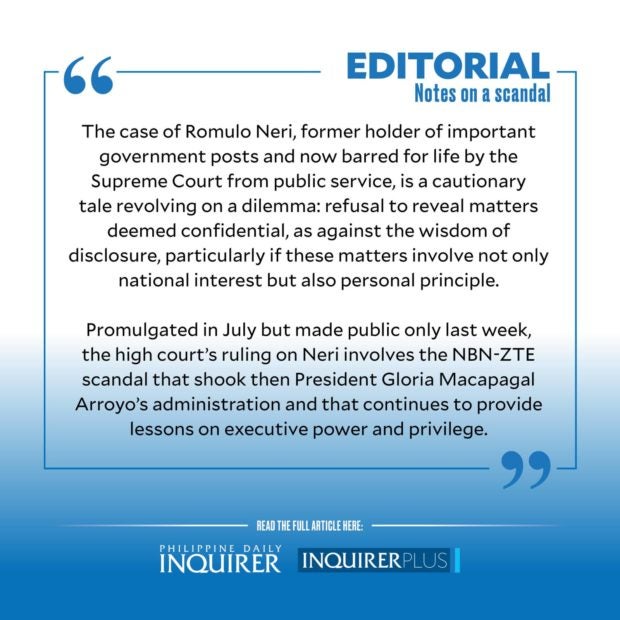 Arroyo had directed Neri, in his capacity as socioeconomic planning secretary and chief of the National Economic and Development Authority, to review the proposed deal with ZTE. Neri testified at the Senate inquiry that in the course of his assignment: he met and dined with Abalos as well as officials of the Chinese embassy and ZTE; that Abalos had offered him P200 million to approve the contract; and that he reported the offer to Arroyo who, he said, told him not to accept it. Abalos denied Neri’s claim or that he was brokering for ZTE, but did not deny his friendship with some of its officials.

Other provocative testimonies were made in other hearings, such as that of Jose de Venecia III, head of Amsterdam Holdings Inc. that had tried to clinch the NBN deal. He described the project as “ridiculously overpriced” by $130 million due to kickbacks and advances supposedly demanded by Abalos, and said Mike Arroyo had also been pushing for the contract and once brusquely told him to “back off.” Mike Arroyo denied having done so; he refused the Senate invitation to testify, citing his doctor’s orders.

The testimonies included that of Mendoza clearing Mike Arroyo and Abalos. There were earlier separate suits brought against the NBN-ZTE agreement by then Iloilo Vice Gov. Rolex Suplico and De Venecia at the Supreme Court (which issued a temporary restraining order on the contract), and even an impeachment complaint filed by Suplico against Abalos for betrayal of public trust, violation of the Constitution, graft and corruption, and bribery.

Abalos quit as Comelec chair on Oct. 1, 2007. Still, claims of lobbying and bribery continued to be aired at the Senate inquiry. Neri never returned to resume his testimony, invoking executive privilege in refusing to talk about his conversations with Arroyo on the issue. Early in 2008 the Senate ordered his arrest, to no avail. But on Feb. 4, De Venecia’s father, Speaker Jose de Venecia Jr., was stripped of the post he had held for 15 years; per reports, the Speaker’s ouster was presided over by Arroyo’s two congressmen-sons.

The tumultuous events included the kidnapping of IT expert Jun Lozada and his emergence under the protection of priests and nuns. In his testimony before the Senate blue ribbon committee, Lozada said Neri had recruited him to examine the NBN-ZTE deal and to “moderate the greed” of Arroyo allies. Reports on the attempted “silencing” of Lozada included such names as then Environment Secretary Lito Atienza and presidential chief of staff Michael Defensor.

All the hue and cry, marked by mass rallies calling for Arroyo’s resignation, as well as legal action in the courts, are now, as the cliché goes, water under the bridge. Arroyo is preparing to run unopposed for the seat vacated by her son in the House of Representatives. Abalos has emerged from hiatus to again run for mayor of Mandaluyong City, the family bailiwick. Etc.

Neri, found guilty of grave misconduct, has been dismissed and disqualified from government service, his leave credits and retirement benefits forfeited.

Duque: Better to stay NCR under Alert Level 2 for now