In March 2017, a retired policeman by the name of Arturo Lascañas appeared before the Senate and shared a shocking, gruesome tale: He had been, he confessed, a hitman, a hired assassin — the leader in fact of the so-called Davao Death Squad (DDS), which had long been said to have carried out scores of killings of criminal suspects, political opponents, and other people deemed undesirable in Davao. The killings were upon the orders of the then-city mayor, said Lascañas. That mayor was Rodrigo Duterte, who was now the President of the Philippines.

Lascañas’ testimony before the Senate, and in his statements in an earlier press conference where he was presented to the public by then Sen. Antonio Trillanes IV, named names and places, detailed out specific incidents, and contained information that dovetailed with allegations separately made by another whistle-blower, Eduardo Acierto, in a report that Acierto submitted to both the Philippine National Police and the organization where he was formerly detailed, the Philippine Drug Enforcement Agency (PDEA), in 2017.

But despite Lascañas’ bombshell revelations, the Senate made short shrift of his testimony, describing it as “self-serving and not worthy of belief and bereft of credibility.” Lascañas had owned up to his participation in extrajudicial killings and other crimes in Davao, but the Senate said he was “not the person to prove [the DDS’] actual existence and finally bring to justice the perpetrators of numerous unresolved crimes in Davao City or elsewhere if proven so.” 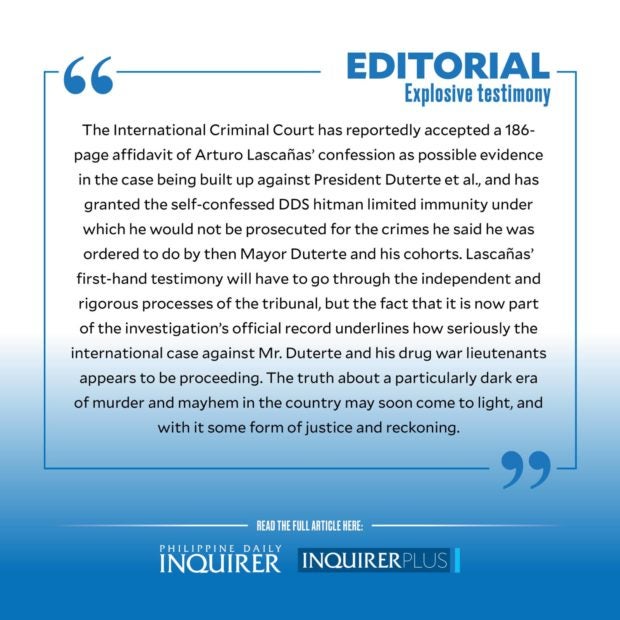 While Lascañas’ disclosures were officially scorned and ignored, President Duterte’s administration replicated on a nationwide scale the brutal “war on drugs” he had patented in his hometown, with bodies soon piling up in the hundreds, then in the thousands, invariably from bloody police operations that left drug suspects dead and riddled with bullets because they allegedly fought back.

Over four years later, Lascañas’ discarded testimony has reemerged and has found a new, more receptive audience: the International Criminal Court (ICC), which is investigating the spate of drug war killings from Mr. Duterte’s mayorship to the first years of his presidency. The court has reportedly accepted a 186-page affidavit of Lascañas’ confession as possible evidence in the case, and has granted him limited immunity under which he would not be prosecuted for the crimes he said he was ordered to do by Mayor Duterte and his cohorts.

The landmark Lascañas deal indicates that the ICC, the tribunal tasked with prosecuting global impunity, has pored over Lascañas’ testimony and has found enough merit in it to justify including it in the case for crimes against humanity being built up against Mr. Duterte et al.

What are Lascañas’ most damning claims? For one, that Mr. Duterte ordered and paid him and other members of the DDS to kill criminals and political opponents during his time as mayor. The orders were allegedly given either directly by “Superman,” code for then Mayor Duterte, or through his trusted aides.

One of those he and his group were allegedly ordered to kill was radio host Jun Pala Jr., a fierce critic of the mayor. Lascañas said he was hired for the job through the mayor’s driver, SPO4 Sonny Buenaventura. Two days after they killed Pala in an ambush on Sept. 6, 2003, Lascañas said Mr. Duterte paid the group P3 million through Buenaventura.

They also bombed mosques in 1993 as a form of retaliation after Moro rebels were blamed for the bombing of a Roman Catholic cathedral.

Lascañas claimed that with the consent of Mayor Duterte, he and his group shot dead a kidnapping suspect in Davao along with the man’s pregnant wife, young son, father-in-law, and two others. “All right, make it clean,’’ he quoted Mayor Duterte as telling him.

Significantly, Lascañas also wrote in his affidavit to the ICC about the alleged illegal drug trade of a person close to Mr. Duterte, the mysterious Michael Yang, who is now a central figure in the Senate investigation into anomalous government transactions with an underfunded company supposedly bankrolled by Yang. When he became President, Mr. Duterte appointed the Chinese businessman as “special economic adviser” and cleared him of involvement in illegal drugs. The mayor also allegedly ordered the Dec. 31, 2004 killing of several Chinese drug suspects arrested during a PDEA operation who could reveal Yang’s involvement in the illegal drug trade.

Lascañas’ first-hand testimony will have to go through the independent and rigorous processes of the tribunal, but the fact that it is now part of the investigation’s official record underlines how seriously the international case against Mr. Duterte and his drug war lieutenants appears to be proceeding. The truth about a particularly dark era of murder and mayhem in the country may soon come to light, and with it some form of justice and reckoning.