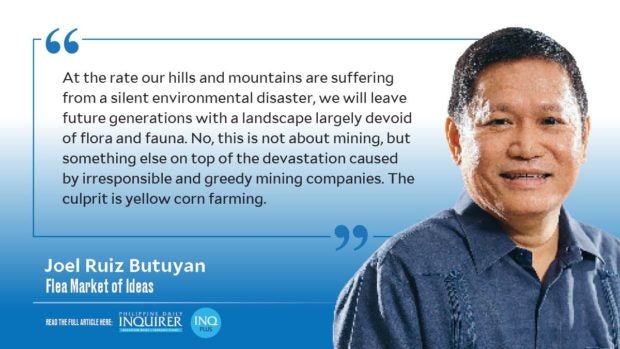 At the rate our hills and mountains are suffering from a silent environmental disaster, we will leave future generations with a landscape largely devoid of flora and fauna. No, this is not about mining, but something else on top of the devastation caused by irresponsible and greedy mining companies.

The culprit is yellow corn farming. The unsuspecting offenders are subsistence farmers who have been driven to the hills and mountains where they slash and burn public land in order to turn them into upland cornfields. Corn farmers are among the poorest of our poor, earning less than P16,600 per hectare every harvest.

In a recent study done by Department of Agriculture (DA) officials in Region 2, farms in our hills and mountains have been found to be experiencing soil erosion at the shocking rate of as much as 100 tons per hectare per year. That’s a whopping 100,000 kilos of soil lost per year per hectare. And the biggest culprit for this massive loss of fertile soil is yellow corn farming.

With 2.5 million hectares of land devoted to yellow corn farming in our country, mostly in hills and mountains, imagine the staggering volume of soil that we’re losing every year. We’re on a path of bequeathing to our descendants an infertile landscape stripped of the ability to sustain plant and animal life.

The study was done by the DA officials because they wanted to find out the degree of soil erosion in the watershed areas of 19 Small Water Impounding Projects (SWIP) in the Cagayan Valley region. The SWIPs are small dams that collect rainfall for flood control purposes during the rainy season, and for the irrigation of farmlands during the dry season. These SWIPs are overwhelmingly surrounded by yellow corn farms. Cagayan Valley is our country’s biggest producer of yellow corn, which is the staple food for livestock.

What makes yellow corn farming destructive to the environment is its use of herbicides that kill all other plant forms. This makes the soil porous, and when there’s heavy rain, the soil in our hills and mountains is swept away in heavy volumes. (Another problem: Most of our country’s farmers are now planting genetically modified yellow corn.)

One of the SWIPs included in the DA study is in Alcala, Cagayan, where I reside. The water storage capacity of Alcala’s 12 SWIPs have been fast decreasing because their reservoirs have suffered from heavy siltation brought about by soil erosion coming from the surrounding yellow corn farms. Even before the study, Alcala had started partnering with corn farmers in order to help them shift to other crops. The municipality has convinced groups of farmers to stop planting yellow corn; the farmers have instead allowed the planting in their farm lots of fruit trees such as citrus, pomelo, mango, guyabano, among others. Their perimeter boundaries are planted with native forest trees that will serve as windbreakers during typhoons. All tree seedlings are provided for free by the municipality.

While the trees are growing, the farmers are assisted in planting cash crops like a variety of vegetables, peanut, cassava, camote, and white corn (which is for human consumption and does not use herbicide). When the fully grown trees already provide canopy shade, the farmers will be advised and guided on the feasibility of planting cacao, coffee, pepper, ube, and ginger. Agricultural experts from the Cagayan State University and the DA have agreed to assist them for this purpose.

The municipality has helped the farmers with cash subsidies to tide them over as they make the shift. Alcala has also found direct buyers for its farmers’ new cash crops, like peanut and white corn, assuring them of higher income because no middlemen are involved.

The national government must support and promote the bold initiatives of local governments like Alcala. They’re providing solutions to our very serious problems of environmental devastation and rural poverty.