A multisectoral group last week appealed to the Senate to rechannel more than P1 trillion of the proposed 2022 budget away from infrastructure projects to programs that will address the pandemic in a more inclusive way, such as cash aid during lockdowns and more support for health care workers and the unemployed.

The argument of the People’s Budget coalition, which was organized by the Institute for Leadership, Empowerment, and Democracy (iLEAD), the Alliance of Health Workers, the Citizen’s Budget Tracker, and the Makati Business Club, is that there are more important concerns during this pandemic than building more roads and bridges. It cited in particular the areas of social protection, health, labor and employment, education, and public transportation. According to its estimate, some P1.16 trillion of the P5.02-trillion budget for 2022 can be recast to address these more pressing needs.

In its proposal sent to the Senate, which is deliberating on the 2022 budget, the group suggested that P540 billion be set aside for a cash subsidy program that would see 18 million households get a cash aid of P10,000 a month for three months. An allocation of P268 billion, on the other hand, would help 4.25 million unemployed Filipinos get back on their feet with jobs, wage subsidies, and skills training. Another P176 billion should go to the health sector to provide various forms of support to some two million health care workers. To help distressed transport workers and address the lingering public transport shortage, the group proposed a P150-billion budget for “strategic road-based public transport investments,” including safe pathways and bike lanes and an equity subsidy for public transport workers due to the government mandate to modernize their fleets. For education, a budget of P94 billion was suggested to cover the transport needs and cell phone load allowances for teachers and stipends for students.

Zy-za Nadine Suzara, iLEAD’s executive director, stressed that social protection programs must get a bigger share than health care because the impact of the pandemic has gone beyond health and affected nearly every aspect of people’s lives. “Just because the lockdown was lifted does not mean people don’t need help anymore,” she said, pointing out that prices of basic goods and services, for one, have risen sharply due to higher oil prices. 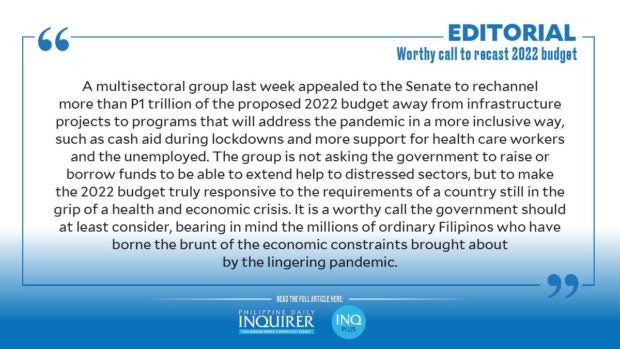 The proposed 2022 budget earmarks 87 percent for public works projects. The group sees this allocation as disproportionate to the country’s current needs. “We are not saying infrastructure is bad. We are not saying we do not need to modernize our infrastructure. What we’re saying is we need to prioritize. In the middle of the pandemic, should this really be our priority?” asked Suzara.

The coalition also pointed to the fact that infrastructure projects, while able to generate jobs, are rolling out at a very slow pace and thus are limited in their ability to address the urgent needs of ordinary Filipinos hard-hit by the pandemic and the economic downturn. After studying the disbursement record of the Department of Public Works and Highways (DPWH) and the Department of Transportation (DOTr) in the past four to five years, the group concluded that the departments disbursed only less than 40 percent of their funds in a year. “So if we’re saying that ‘Build, build, build’ is the main strategy for economic recovery, how is that going to happen if these agencies are only able to spend less than 40 percent of their own budget?” said Suzara. On the other hand, social protection funds go directly to the people who need them, and can be disbursed much faster.

Items in the pending 2022 budget that iLead has identified for possible realignment include the DPWH’s proposed P686.1 billion for asset preservation, network development, and bridge, flood management, and special support programs; and the DOTr’s more than P114 billion allocation for rail, aviation, and maritime infrastructure projects. More people can also benefit from realigning P4.5 billion from the Office of the President, P14.2 billion from the Philippine National Police, and P54.1 billion of “special purpose funds,” including the controversial budget for the National Task Force to End Local Communist Insurgency.

The civil society coalition is not asking the government to raise or borrow funds to be able to extend help to distressed sectors; it is asking that existing funds earmarked for less urgent projects be rechanneled at this time to those who need them the most, and thus make the budget truly responsive to the requirements of a country still in the grip of a health and economic crisis. It is a worthy call the government should at least consider, bearing in mind the millions of ordinary Filipinos who have borne the brunt of the economic constraints brought about by the lingering pandemic.

Read Next
AFP chief of staff No. 11
EDITORS' PICK
Gear up and get ready to play with Yamaha Mio Gear
PH to import 60,000 tons of fish to cover shortage
Workers are exempted from ‘no vax, no ride’ policy – DOLE chief
#VotePH2022: COVID, power woes loom as poll concerns
Over 3 Million worth of prizes to be won at Smart Padala’s SENDali Manalo Promo!
Acer starts the year off strong with the Aspire Vero National Geographic Edition
MOST READ
1Sambayan names 7 aspirants in its 2022 Senate lineup
Cold-case investigation names surprise suspect in Anne Frank’s betrayal
Guevarra to Acosta: Obey rules on unvaccinated
Emma Stone calls Andrew Garfield a ‘jerk’ after he ‘lied’ about his ‘Spider-Man: No Way Home’ appearance
Don't miss out on the latest news and information.