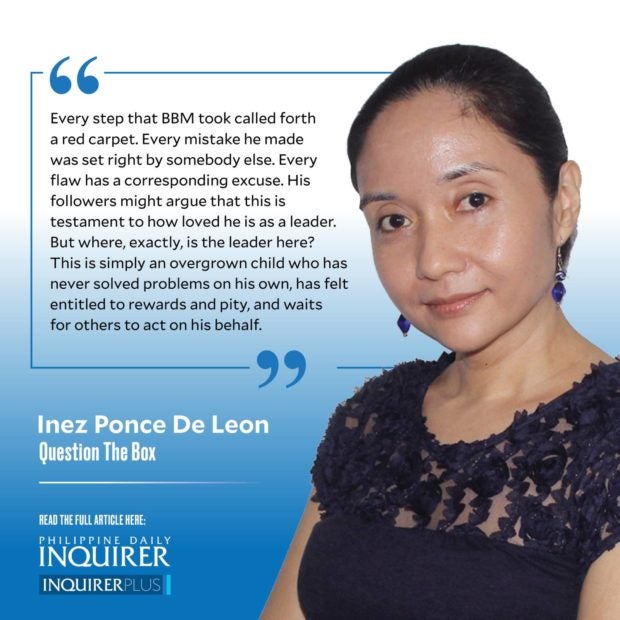 Bongbong Marcos’ degrees—or lack of them—have been the subject of both scrutiny and mudslinging online these last few weeks. One side argues that lying about credentials casts doubt on the ability of a leader to be honest and transparent. The other argues that people lie all the time, and the important thing is that the eldest son of the late dictator is helping people; to the loyalists, the failing grades at school are mere accidents, because Marcos’ track record should speak for itself.

The latter argument assumes that lying about one’s education is something that Marcos Jr. might have done when he was perhaps stoned, disturbed, or finding himself. This argument also assumes that the recklessness of his youth has now been abandoned, replaced by maturity and responsibility.

The Oxford, Wharton, and tax evasion issues, however, are all consistent with BBM and his brand.

The Vera Files did an excellent job digging up official communiques among ambassadors, businessmen, and Marcos Sr., and using these documents to piece together the BBM of the late 1970s to early 1980s.

In Oxford, Marcos Jr. failed two out of three subjects in his first year, but was given one more chance to retake the examinations. The solution: Hire major scholars and professors to tutor him.

He passed one out of the two subjects on his second try, which should have meant automatic dismissal from the university. The solution: extensive lobbying by UK-posted Philippine officials, which led to his special diploma in social studies (awarded to nongraduates).

He would not have been able to go to graduate school. The solution: more lobbying by businessmen close to his father so that his Wharton application could be processed even with no evidence of an undergraduate degree. Bonus: bestowal of the nominal assignment of military advisor, rank attaché, to the Philippine Mission to the UN, which granted him diplomatic immunity.

He did not finish his graduate degree: He earned only 11 units of study, and had not gone far enough to start work on his thesis. And yet he claimed that he had to leave the program while in the middle of his thesis because he had to serve as Vice Governor of Ilocos Norte, a post that he won in an uncontested race—a post that he was sworn into at the Philippine Embassy in Washington, DC.

In 1999, on the eve of the anniversary of the 1986 Edsa Revolution, the Inquirer ran an article about how Marcos Jr. refused to apologize for his family’s transgressions. The human rights claimants simply wanted to make money, he said; the revolution was no more than a political power grab, he claimed.

Over two decades later, he runs for the presidency, and his rhetoric is still the same: He is the tormented, misunderstood victim; his family has been demonized and tyrannized; his followers talk about oppression by the “Yellows.”

These overblown, irritatingly exaggerated dramatics should come as no surprise. All his life, Bongbong has moved forward because of lobbying; has eluded persecution because of the concessions and efforts of others; has been cuddled, coddled, babied. He began with Philippine officials watching over his shoulder, continued with businessmen and bodyguards protecting his every move, goes on today with the same drama endorsed by his overzealous followers.

Every step that BBM took called forth a red carpet. Every mistake he made was set right by somebody else. Every flaw has a corresponding excuse. His followers might argue that this is testament to how loved he is as a leader. But where, exactly, is the leader here? This is simply an overgrown child who has never solved problems on his own, has felt entitled to rewards and pity, and waits for others to act on his behalf.

The noise of his rabid followers might be loud; but in the chaos, let us not ignore the candidate who tells us that we can stand as a nation if we work together. Let us not ignore the Vice President who solved problems even when she was cast out of President Duterte’s Cabinet and stripped of resources.

She never acted like a baby, and does not expect her followers to do so either.

We are not babies, and we are better than a dictator’s son whose life has been built on excuses and lies.