The poverty of our democracy | Inquirer Opinion
Close
menu
search

The poverty of our democracy 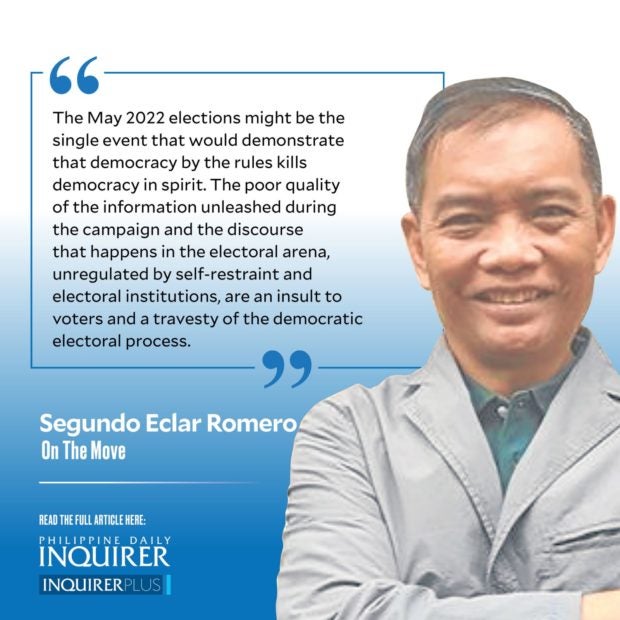 Fernando Poe Jr. was known for the saying, “kapag puno na ang salop, kakalusin na” (When the rice measuring container is full, it’s time to strip off the excess). The rice example is meant to signify a thrilling end to abuse by the powers that be in local communities. This is where the champion, the savior, or the townspeople themselves act to redress long-felt grievances.

This comeuppance scenario is so resonant with the Filipino people that they could not have enough of the Fernando Poe Jr. movies. The 1987 movie was followed by two sequels, “Ako ang Huhusga” (I will be the judge, 1989) and “Hindi Ka Na Sisikatan ng Araw” (You will not live to see the sunrise, 1990). It did not matter that these movies were variations on the same theme, and even starred the same protagonists such as Eddie Garcia, Paquito Diaz, Jose Romulo, Dencio Padilla, Roy Alvarez, and Rowena Moran.

These movies played out the same scenario of Poe’s other action films and were lapped up by audiences, as if they thirsted for the kind of vigilante-style justice that they dreamed of but could not obtain in real life. Even the death of “ex-future President” Fernando Poe Jr. did not end this parallel saga of the Filipino. The “Ang Probinsyano” TV series continues and may even outlast the Duterte administration.

Maybe the zarzuela or moro-moro that provides respite to real life is what makes life possible for the poor and downtrodden. It is the sliver of hope that keeps them going. As Manuel Uy used to say, “Ang nagwawagi ay ‘di umaayaw, at ang umaayaw ay ‘di nagwawagi” (The winner never quits, the quitter never wins). The long lines at the lotto betting stations seem to validate this.

Some friends who are scriptwriters delight us with stories of how they sometimes feverishly rewrite scripts for teleseryes to accommodate various minor exigencies on the location set even when during filming. This superficiality is not reflected in the way people hang on with much emotion to every piece of action or dialogue that ends up on the television screen.

How different might this situation be from the political zarzuela we are currently witnessing? President Duterte announces he will run for vice president. Then he says he will not run when opinion polls reveal that people frown on this idea. So he declares he will retire from politics. Now it seems he might run for senator, and is already being groomed to be Senate President by his supporters!

Cut to Davao City, where Mayor Sara Duterte says she will not run for president and files for reelection for mayor of Davao. Wait! She then withdraws her certificate of candidacy for mayor and hints she will run for higher office. Meanwhile, Bong Go makes a tearful swipe at the nature of politics in the Philippines, indicating he’s preparing to give up his cameo candidacy for the vice presidency. So we await the Nov. 15 episode of this teledrama.

All this superficiality flies in the face of its dangers to Philippine democracy.

Even before the official campaign period begins, information and disinformation overload has descended on the electorate. And there will be more of the 9Gs—guns, goons, gold, glitter, girls, gimmicks, gigabytes, glitches, and GCash—when the going gets tough. But lost in all of this is the quality of democracy in the Philippines. The May 2022 elections are being framed as a contest among saviors. There are now six contending saviors—Lacson, Pacquiao, Moreno, Marcos, Robredo, and Dela Rosa. We have been oblivious to gloomy interpretations that the May 2022 elections will be a referendum between two failed constitutional orders or polities—the failure of constitutional authoritarianism (1972-1986), and the palpable failure of the democratic restoration (1986-2022).

The May 2022 elections might be the single event that would demonstrate that democracy by the rules kills democracy in spirit. The poor quality of the information unleashed during the campaign and the discourse that happens in the electoral arena, unregulated by self-restraint and electoral institutions, is an insult to voters and a travesty of the democratic electoral process.

All this no-holds-barred contestation for the presidency shows the poverty of our conception of, commitment to, and capacity for democracy. We may not be able to catch ourselves from our fall in time.