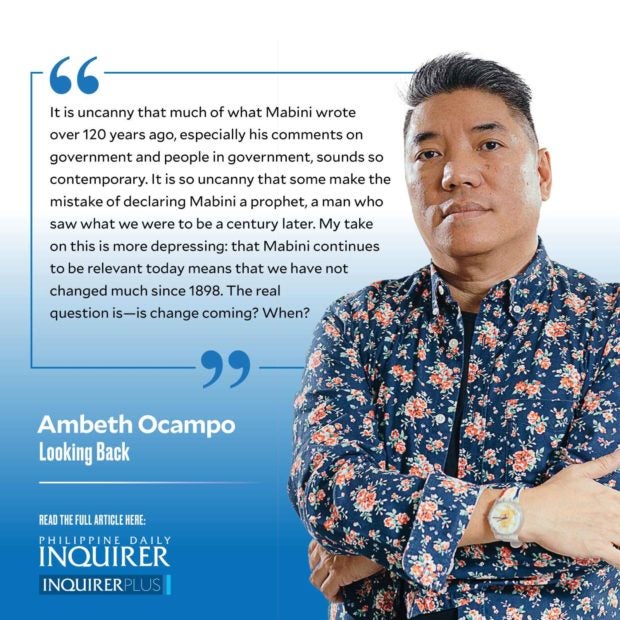 As the circus leading to the 2022 elections has begun, we should take a hard look at the roster of presidential candidates and weigh each on a balance set by Apolinario Mabini in 1898:

“The President is the personification of the people and consequently his person is sacred and inviolate, and no liability can be required of him while he is in office. The President is nothing else than the brother and the friend of all the Filipinos, and therefore he may be considered as the eldest whilst he is the first in honesty and civic virtues. (Note that elder brother is “kuya” not a father [tatay] or a grandfather [lolo].)

“It is a duty and honor and consequence for him to live a truly irreproachable life, in order to honor his people before the civilized world and to set an example of honesty and industry to his fellow-citizens (Italics mine).”

Of all the Filipino heroes and heroines, beginning with Lapulapu to today’s pandemic medical frontliners, Apolinario Mabini is the one I find most fascinating. A pity that he is overshadowed by Rizal and Bonifacio, because his writings give us much to reflect on today. Mabini’s compiled writings and correspondence fill only three volumes, very small compared to Rizal’s 25 volumes, but much of what he says is timeless.

Contrary to popular belief, Mabini was not in favor of the Malolos Congress nor the Malolos Constitution arguing that these institutions were for the period after the Philippine Revolution against Spain and the Philippine-American War. Mabini believed that a young nation at war needed a strong president who could act swiftly without the checks and balances from a coequal judicial and legislative branch of government. To this end he had drafted a “Constitutional Program of the Philippine Republic” that was thrown out by the Malolos delegates in favor of something that reflected their own interests. If you are to look at the composition of the Malolos Congress, you will note that some had not even stepped into the region they represented!

In Mabini’s Constitution, members of Congress were elected by qualified taxpayers. To be elected into office one had to be: at least 21 years old, a qualified taxpayer, resident of the pueblo or province to be represented, and: “must have a constant income that will assure him an independent and becoming manner of life.” The most difficult qualification was: “that he is universally considered one of the most cultured and evidently honest residents.”

Such a high bar was placed on the candidate because:

“The office of representative is the most honorable to which every Filipino can aspire because the functions are august and of an eminently patriotic character. Said office in itself constitutes an indelible stamp of honor for the one who deserves it through his honesty, culture, and industry, it is the most authentic title of personal dignity and patriotism.”

The Senate in Mabini’s constitutional program is more of an advisory body to the President and Congress. Senators could provide advice but the President was not bound by it. Those qualified to this high office were either generals and admirals in active service, the rector of the central university, rectors of academies and heads of guilds etc. They had to be: “persons in society distinguished by their honesty and vast knowledge of any of the branches of science, arts, or industry.”

Voters were defined as: “All Filipinos, 21 years of age, who are not vagrants nor convicted of any criminal offense are eligible to vote for any public office or trust, but in order to be elected to one it is further necessary that they should know how to read and write and have the qualifications required by law for each particular office.”

It is uncanny that much of what Mabini wrote over 120 years ago, especially his comments on government and people in government, sounds so contemporary. It is so uncanny that some make the mistake of declaring Mabini a prophet, a man who saw what we were to be a century later. My take on this is more depressing: that Mabini continues to be relevant today means that we have not changed much since 1898. The real question is—is change coming? When?