The private sector is pushing Congress to spend its remaining days in session to pass pending economic reforms needed to enhance the business environment and attract foreign investors. Thirteen trade groups and organizations of foreign companies doing business in the Philippines last week sent letters to the leaders of the House of Representatives and the Senate to reiterate their call for lawmakers to act on 11 bills, some of which have been languishing in Congress, that can help drive the economy’s post-pandemic recovery.

Improving the business climate has been made imperative as other countries strive to attract investments to fuel their economic revival from the COVID-19 crisis. The Philippines’ record in luring investors has so far been dismal. The Board of Investments (BOI) is poised to miss its target investment pledges this year by at least 30 percent, despite the passage of the Corporate Recovery and Tax Incentives for Enterprises (CREATE) Act that was expected to lure in more investors. BOI managing head Ceferino Rodolfo said last week that the BOI expected to end the year with about P600 billion worth of investment commitments, way below the already lowered target for 2021 of P905 billion. Originally, the BOI was hoping to record investment commitments worth P1.25 trillion in 2021. But as of end-October, it had registered only P376 billion in pledges. In 2019, the BOI marked a record year with P1.14 trillion in investment pledges.

The subpar performance could be in part due to the quarantine restrictions, which made it difficult for interested investors to do their due diligence in the country, according to Rodolfo, who is also an undersecretary at the Department of Trade and Industry. Trade Secretary and BOI chair Ramon Lopez had projected that the CREATE Act, which cut corporate taxes and rationalized tax breaks, would be a “game-changer.” But, as reported in this paper, the expected “massive inflow of investments that will create more jobs” has yet to materialize following the bill’s signing in March this year. Rodolfo said the tax reform law still helped, but it could only do so much. “So we really need to open up the economy and allow investors to come in,” he said. 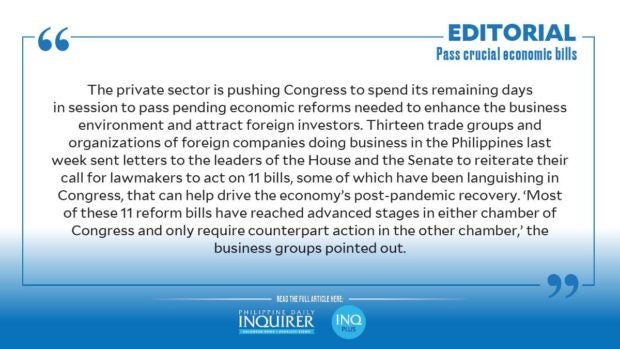 One of the priority measures pending in Congress is the bill amending the Public Service Act, which has been approved by the House but remains pending in the Senate. The bill seeks to designate certain traditional public utilities such as transportation and telecommunications as “public services,” which would allow the entry of foreign companies into such industries. The Constitution currently limits majority ownership of “public utilities” to Filipinos. While there is debate on whether some of the sectors classified as “public utilities” should be opened to foreign investors, many groups have called for deregulating, say, the telecom sector, arguing that the entry of foreign players would be beneficial to the country given the expensive yet poor and limited services offered by the current players.

The other measures being pushed by the private sector for Congress to approve include bills seeking to simplify tax payments, boost digital payment systems, update data transmission regulations, ease the Bank Secrecy Law, create the Department of Water Resources Management, and institutionalize the Freedom of Information Act. Two other tax reform packages by the Duterte administration — the Passive Income and Financial Intermediary Taxation and the Property Valuation and Assessment Reform — are on the table, along with new initiatives such as the Philippine Creative Industries Development Act and the Rural Agricultural and Fisheries Development Financing System Act.

“Most of these 11 reform bills have reached advanced stages in either chamber of Congress and only require counterpart action in the other chamber,” the business groups pointed out.

Congress is now being asked to focus and work double time on the pieces of legislation that can be passed within its very tight schedule. While Congress will resume session on Nov. 8, the Senate is expected to direct the bulk of its work to the 2022 national budget deliberations. Congress will then adjourn for the Christmas break from Dec. 18 to Jan. 16 next year, then resume session from Jan. 17 to Feb. 4, after which it will take a three-month break for the May national elections. Session will resume on May 23 and finally adjourn on June 4. That leaves precious few days for comprehensive deliberations on the crucial economic bills, so legislators cannot waste their remaining time in the current Congress and must instead help the economy move toward recovery by refining and passing the clutch of pending structural reform measures before them, to improve the country’s much-battered business environment.