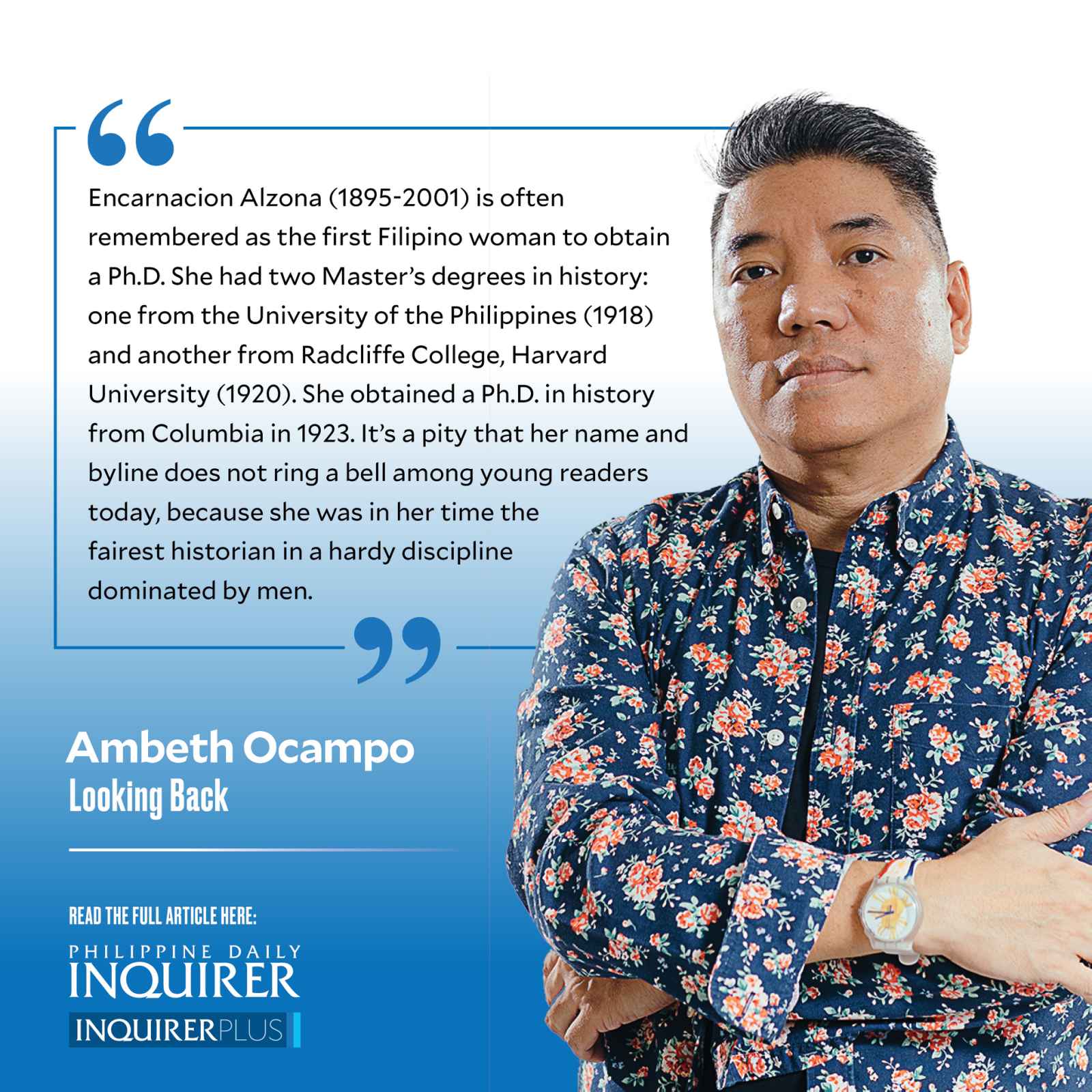 Encarnacion Alzona (1895-2001) is often remembered as the first Filipino woman to obtain a Ph.D. She had two Master’s degrees in history: one from the University of the Philippines (1918) and another from Radcliffe College, Harvard University (1920). She obtained a Ph.D. in history from Columbia in 1923. It’s a pity that her name and byline do not ring a bell among young readers today, because she was in her time the fairest historian in a hardy discipline dominated by men.

Though she left the University of the Philippines Department of History in 1945, she was appointed professor emeritus in 1963 and was later proclaimed National Scientist of the Philippines in 1985. She translated most of Rizal’s correspondence and writings from the original Spanish, French, and German into English, and these I use as reference on a regular basis. She was 90 when I first met her, living alone in a Tudor-inspired mansion on Taft Avenue. She was a recluse whose only contact with the outside world was a housekeeper called Atse. Her house had seen better days, and I wish I had been in it when it was still adorned with the cheerful paintings of Fernando Amorsolo and her library was still complete. Her collection was acquired by the National Library, but she retained some treasures like a first edition of “Noli me tangere” (1887), which was eventually donated to the Ateneo by a relative shortly before the pandemic lockdown.

Listening to Dr. Alzona opened up another world, another time, where she lived on historical research and writing. I met her sometime in 1985 and asked her why she stopped writing in the 1960s. Her candid reply: “I am a hack writer. I do not write for free. Young people should do the writing [now] you know. If I [continue] to write, people will say: ‘She’s old-fashioned.’ So, I don’t write.”

When asked why she was a recluse, she said: “I’m really a lonely person, I want to be alone. I’m not used to having many people around the house … I was frightened by martial law. I heard shots at midnight, then the next morning, I opened the radio, there was nothing. After that, I stopped listening. I am scared of the news. So Chi has a radio and she gives me the news, it’s all horrible. Crime everyday … I also read ‘Malaya’ that is given to me … I get them late but they are brought to me in a bundle every three months. Even if they are old, I read them.”

I did ask Alzona what made her go into history, and the opening of her reply made me smile: “I was lazy. I did not like math or science. History is just reading, I liked that. Besides, I did not have to earn a living.”

She then talked of people who influenced her life: “… like my father, I was fond of reading. He was a scholar too and was always reading in his study. My father was close to Jaime C. de Veyra, who was very helpful to me … I also met [historian and National Library director Trinidad H.] Pardo de Tavera … half an hour with these two men was like one course in school. You learned so much. Do you know that the [Spanish] ‘Historia’ published in the 1903 Census was merely a translation of the English version [by Pardo de Tavera]? The people in America lost the original and all they had was the translated English version, so they retranslated it into Spanish and published it. It was bad. Pardo de Tavera was very angry, so he published the original. I have a copy in my library with his dedication.

“The sisters of Rizal used to stay in our house in Lucena, Tayabas. They were thinkers and they had a great influence on us … Tia Maria [Rizal] used to say to me: ‘Study! Go to the university. You have the chance, we had none in our time.’ She told this to my father, and that’s how I got into school.”

I was just starting out writing articles on Philippine history for a Sunday magazine at the time, and seeing Dr. Alzona in her twilight years was not very encouraging. She was lucid and had full command of her faculties unlike younger historians like Esteban de Ocampo and Carlos Quirino, who had lost their memory in old age due to Alzheimer’s. Two conversations with Alzona made me realize the solitary, almost monastic, calling of a historian, who is always alone with books and manuscripts. One must read and write while you can, retire when you should, and pray that the mind remains sharp and clear when life is at its sunset.

Comments are welcome at ao[email protected]