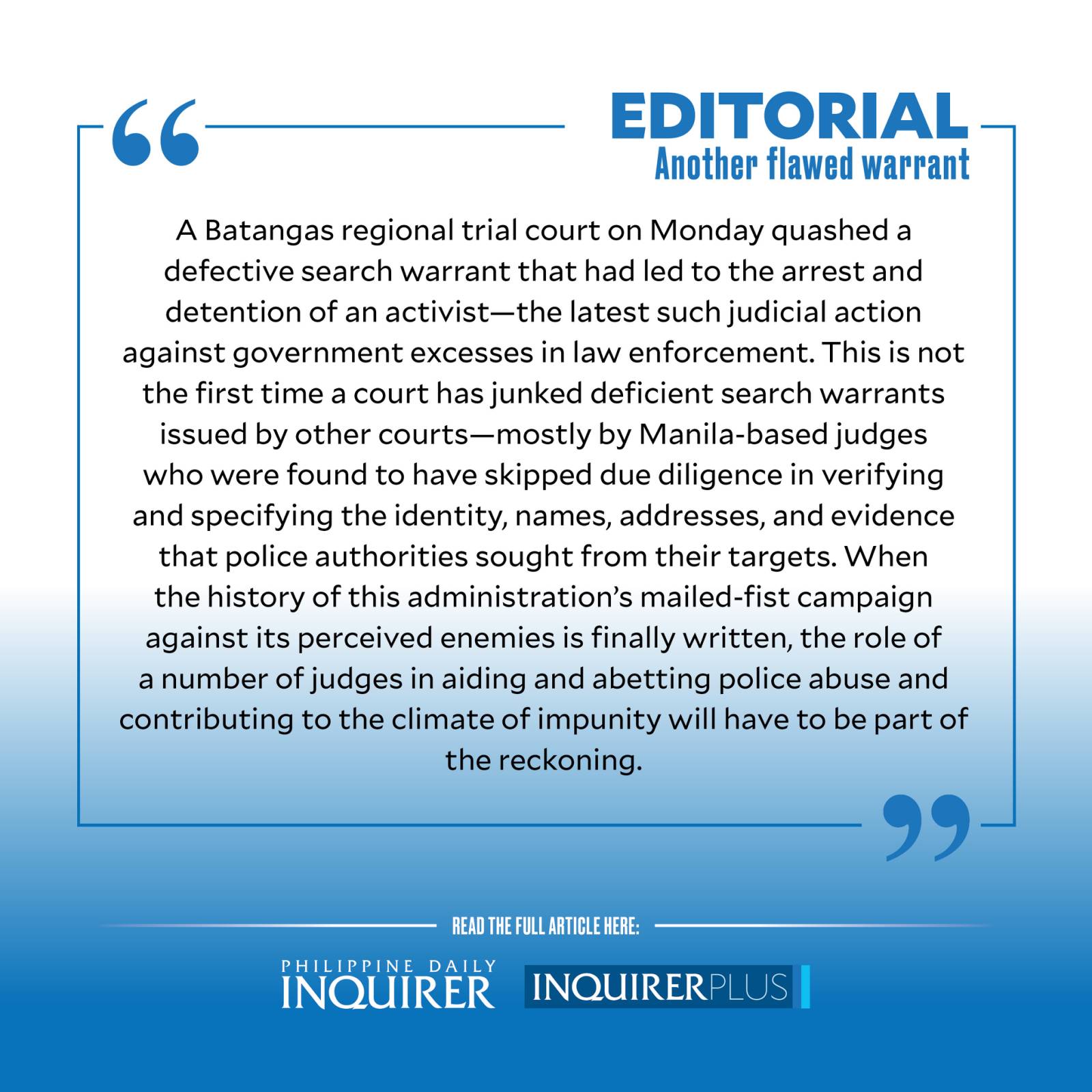 A Batangas regional trial court (RTC) on Monday quashed a defective search warrant that had led to the arrest and detention of an activist—the latest such judicial action against government excesses in law enforcement.

Judge Jose Recuerdo Flores of the Tanauan, Batangas RTC dismissed the charges of illegal possession of firearms and explosives against Erlindo Baez, Bayan-Batangas spokesperson and provincial coordinator, after noting that the search warrant, issued by Manila RTC Judge Jason Zapanta, “failed to specifically and sufficiently describe the place to be searched.” The warrant merely indicated the village—“Brgy. Vicente, Sto. Tomas City, Batangas,” and had “no description of the location of the accused’s house to distinguish it from other houses in the (area),” Flores said. Instead of pictures and documents specifying the targeted house, the police “relied on the general presumption of regularity of the performance of official function” which, said the judge, “cannot prevail over the constitutional right of the accused to be presumed innocent.”

Baez, who was not in his house when the warrant was served, was arrested only on Oct. 6 this year in Sariaya, Quezon. Judge Flores has ordered his immediate release.

Baez’s house was raided on “Bloody Sunday”—March 7 this year, when nine activists ended up dead in sweeping police operations. According to a report by Court Administrator Jose Midas Marquez, 42 search warrants issued by different Manila courts were simultaneously served on that day. The police actually applied for 72 search warrants for the Bloody Sunday raids but some were denied, Marquez said.

This is not the first time a court has junked deficient search warrants issued by other courts—mostly by Manila-based judges who were found to have skipped due diligence in verifying and specifying the identity, names, addresses, and evidence that police authorities sought from their targets.

The rights group Karapatan said 76 activists were arrested through search warrants issued by Quezon City Executive Judge Cecilyn Burgos-Villavert, a number of which were subsequently voided by other courts for being flawed. Among those arrested via Burgos-Villavert’s defective warrants but were subsequently released were editor Lady Ann Salem and labor organizer Rodrigo Esparago, National Democratic Front peace talks staffers Alexander and Winona Birondo, and six Negros Occidental activists.

Also arrested based on vaguely worded warrants were a United Church of Christ pastor, several Tumandok tribesmen in Capiz, an activist couple, members of the militant group Anakbayan, a Red-tagged storeowner in Batangas, and a former New People’s Army commander.

In many cases, the serving of the warrants ended in the death of the subjects. Aside from the nine killed in simultaneous raids that Bloody Sunday, nine Tumandok tribesmen—tagged as communist insurgents—were killed by police and the military in Capiz on Dec. 30, 2020.

The numerous instances of culpability among judges who recklessly disregard proper judicial procedures in issuing deficient warrants have prompted activist groups and rights lawyers to question how, given the short time frame and the distances involved, these judges could have personally examined the complaint and the evidences presented to determine probable cause. They also challenged the authority given to Manila and Quezon City RTC executive judges to issue search warrants enforceable anywhere in the country.

In response, the Supreme Court in July this year limited the scope of the judges’ issuance of warrants only within their judicial regions, and prohibited the “wholesale” grant of these documents amid accusations that some courts have become “warrant factories.” The high court also required police and state agents to wear body cameras when serving the warrants.

While welcoming the move, lawyers and rights groups said it’s still not enough to stop the arbitrary arrests and extrajudicial killings (EJKs) that result from weaponized court warrants.

The most crucial corrective is prosecuting police abuse, but the wanton misconduct in obtaining and serving defective warrants has been seemingly ignored, with the

Department of Justice (DOJ) still to file cases against the guilty parties. The DOJ said it will release its own findings on the Bloody Sunday killings “in a few more days.”

Just how serious is the DOJ probe? Its list of only 52 EJKs—out of some 6,000, according to official figures—that the agency is purportedly investigating for glaring procedural lapses do not make mention of the deaths associated with the voided warrants at all.

When the history of this administration’s mailed-fist campaign against its perceived enemies is finally written, the role of a number of judges in aiding and abetting police abuse and contributing to the climate of impunity will have to be part of the reckoning.