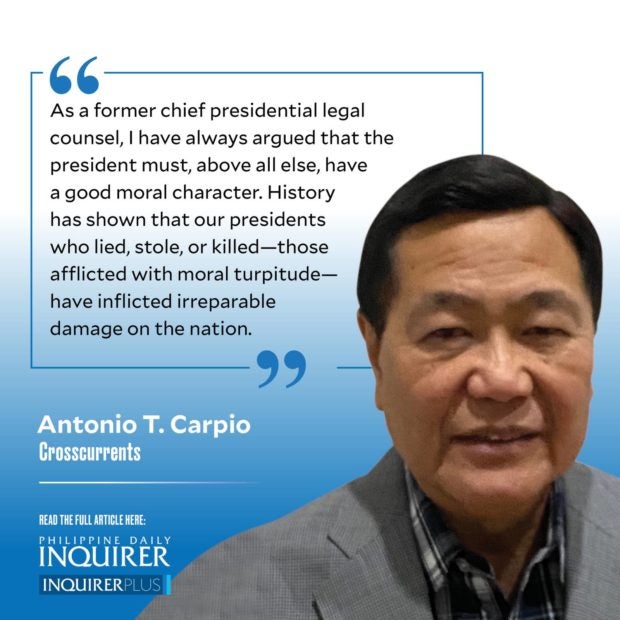 A disqualification case was filed with the Commission on Elections on Nov. 2, 2021 against Ferdinand R. Marcos Jr. on the ground that he is not eligible to run for president in the May 2022 elections. The disqualification case is anchored on two legal provisions. First, Section 12 of the Omnibus Election Code (OEC) disqualifies any candidate who has been convicted by final judgment of “any offense for which he has been sentenced to a penalty of more than eighteen months or for a crime involving moral turpitude.”

Second, Section 253(c) of the Tax Code provides that “any public officer” who is convicted of any crime penalized by the Tax Code is “perpetually disqualified from holding any public office, to vote and to participate in any election.” Either one of these two grounds is sufficient to disqualify Marcos Jr.

In 1992, Marcos Jr. was charged for tax evasion under the Tax Code for failure to file his income tax returns, and to pay the taxes thereon, for taxable years 1982 to 1985. Marcos Jr. was elected vice governor of Ilocos Norte from 1981 to 1983, and governor from 1983 to 1986. In 1995, the Regional Trial Court convicted Marcos Jr. of tax evasion, imposing on him a fine and imprisonment of three years for each of two counts. The conviction was affirmed by the Court of Appeals which modified the penalty, imposing on Marcos Jr. only a fine with no imprisonment. The conviction became final in 2001.

FEATURED STORIES
OPINION
Rewarding inefficiency
OPINION
Drop the Maharlika fund
OPINION
Who will be president of the Diliman republic?

Penal laws are strictly construed against the State and liberally in favor of the accused. Penal laws are prospective and cannot be given retroactive effect unless favorable to the accused. A person cannot be punished for an act that was not penalized when committed, or subjected to a penalty that was not imposed when the prohibited act was committed. The defense of Marcos Jr. will rely mainly on these legal principles. Marcos Jr. will insist that the disqualification law must have existed at the time of the commission of the crime of tax evasion for the disqualification to apply to him. For individuals, the income tax return, together with the payment of the income tax, is due on April 15 of the year immediately following the taxable year. Thus, for taxable year 1985, the income tax return, and the payment of the income tax thereon, was due on April 15, 1986. The failure to file the return or to pay the tax thereon on time has been made a crime since 1939 under the Tax Code.

As a former chief presidential legal counsel, I have always argued that the president must, above all else, have a good moral character. History has shown that our presidents who lied, stole, or killed — those afflicted with moral turpitude — have inflicted irreparable damage on the nation.