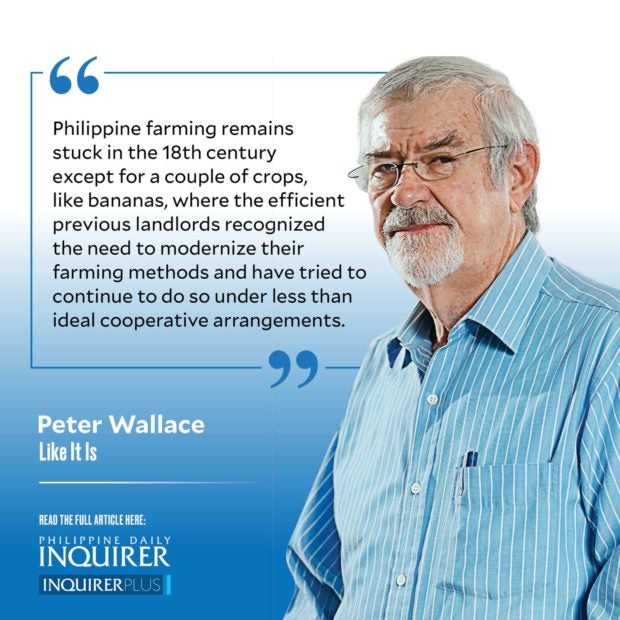 Three weeks ago, in my “Wish List,” I suggested that agriculture should be a top priority for the next administration. It’s crazy that a country with so much arable land and a starving population doesn’t produce enough food to feed its people, let alone produce more to feed other hungry people. We have this national resource, and we neglect it. And we’ve been doing so since time immemorial.

The Philippines ranked 64th out of 113 countries in the Global Food Security Index 2021, which measures, among others, food affordability, availability, quality and safety, and natural resources and resilience. Yet with arable land and a favorable climate, we should be among the top 10 or at least top 20 food-producing nations, not in the bottom half.

Agriculture is where 9.7 million people or 23 percent of the workforce operate directly as farmers and fishermen, with another estimated 1 million people employed in the manufacture of food and beverage products. And heaven knows how many informal ones make cookies, pastries, rice dishes at home to sell to neighbors, etc. Then there are all the middlemen (they can go)—transporters, distributors, retailers. The dependence is huge.

Lest we forget, there are 110 million Filipinos that have to eat to stay alive and are dependent on this sector.

So you’d think agriculture would be treated with the highest importance. But in the past 50 years, it certainly hasn’t been. It’s been ignored and mismanaged and underfunded, treated almost as a pariah.

Just look at a couple of numbers and shudder. Over the past decade (2010-2019), industry grew on average 6.8 percent and services at 7.1 percent, but agriculture at below population growth at 1.9 percent. Ask yourself what earthly reason could there be for it not being in the same growth path. The poverty incidence among farmers and fisherfolk is at 31.6 percent and 26.2 percent, respectively. The national average is 16.7 percent.

According to Dr. Fermin Adriano, the agricultural budget of the Philippines stood at only 1.5 percent in 2020. This pales in comparison to our Asean neighbors: Vietnam at 6.5 percent, Thailand at 3.6 percent, Indonesia at 3.4 percent, and Malaysia at 2.3 percent. So, an obvious first action the next government must do is to double or even triple the spend on agriculture. And reduce the misuse (read: theft) of it.

Philippine farming remains stuck in the 18th century except for a couple of crops, like bananas, where the efficient previous landlords recognized the need to modernize their farming methods and have tried to continue to do so under less than ideal cooperative arrangements. I’ll never forget how, as a university student, a group of us kids went to Bali on vacation. We had no chance to pick up girls on the beach; the husky, bronzed Aussie sugarcane cutters stole them all. A few years later, giant machines cut the cane, and we got the girls.

Who can invest in a machine when you only have 1.6 hectares (what’s left of the five after being split with the children as the patriarch dies)? For me, the greatest harm done to the farmer was to force him onto five-hectare lots he couldn’t use as collateral for a loan, couldn’t sell, and couldn’t convert to other nonagricultural uses. He could only split it into smaller lots for his children when he died. And most children didn’t want it—they wanted a steady, well-paying job in the city.

We’re providing less food today when we should be providing not only what the people need, but more. More to export, for instance: We have a number of crops where we can be competitive. We’re successful at exporting pineapples, bananas (which we can now sell to Taiwan under a newly signed free trade agreement), and to a limited extent mangoes, where product quality needs to be improved. But what few other crops we export are in low volumes. Yet we could be a major world supplier of a number of crops, if properly supported by the government (as Malaysia did with its palm oil). A range of coconut products is becoming increasingly recognized for their therapeutic value. With better promotion, their export growth could be accelerated. Our seafood, too, has great potential if we don’t overfish. And if we kick the foreigners out of our waters.

We are last, when we should be first, in Southeast Asia on exports because our production of food products is not modern, not efficient. It’s on five hectares or less.

The differences are glaring. More next week.

TAGS: agriculture, food security, Like It Is, Peter Wallace