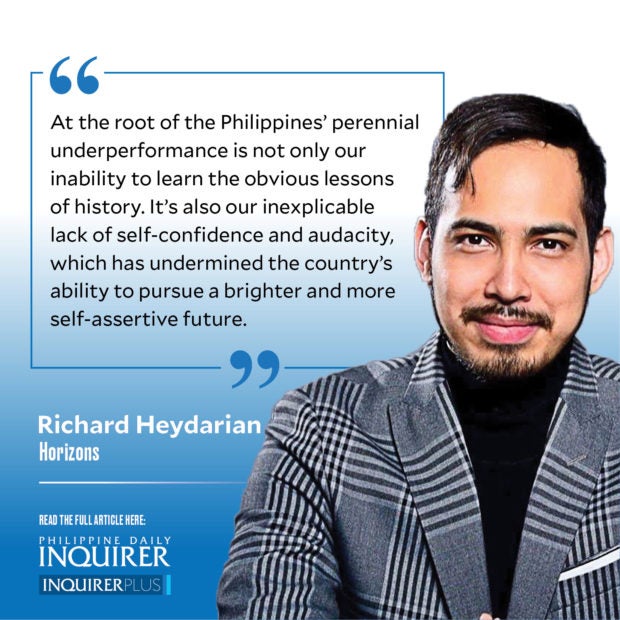 At the root of the Philippines’ perennial underperformance is not only our inability to learn the obvious lessons of history. It’s also our inexplicable lack of self-confidence and audacity, which has undermined the country’s ability to pursue a brighter and more self-assertive future.

For the past century, our foreign policy has orbited around modern empires—first Washington and now Beijing. But to be a truly independent country, we should strive to become a formidable “middle power” in the 21st century and accordingly work with like-minded powers in the Indo-Pacific.

Last week, the topic of middle powers was the common thread that ran through a number of my public engagements. First came a panel discussion, organized by the Council of Asian Liberals and Democrats, on “Japan’s 2021 Elections.” Among my co-speakers were leading Japan experts such as Professors Harukata Takenaka and Saul Takahashi as well as Dr. Robin Ramcharan. At the heart of our discussion was not only Japanese politics per se, but also the indispensable role of Japan as a super “middle power” in the region.

A day later, I met the French Ambassador to Manila, Michèle Boccoz, an articulate, well-rounded, and charming diplomat with deep and broad understanding of regional politics.

It also happened to be my first in-person, albeit socially distanced, engagement with a senior official in more than a year. My other engagements, including with the equally sharp German Ambassador to Manila Anke Reiffenstuel, were mostly on Zoom due to pandemic restrictions.

It’s true that neither Japan, following its “lost decades,” nor postwar France and Germany, are superpowers. But without question, they are all at the very least major middle powers, which are integral to a free and open order in the Indo-Pacific.

Annual surveys by the Singapore-based Institute of Southeast Asian Studies have consistently shown that Japan and the European Union are the two top preferred external powers for the Southeast Asian region.

Japan has also been a leading source of maritime security assistance to the region, especially to coast guard forces of frontline states such as the Philippines, Vietnam, and Malaysia, which have been at the receiving end of China’s maritime expansionism.

Both Japan and the EU, meanwhile, have collectively finalized mega free trade and infrastructure development deals, including the Japan-EU Partnership on Sustainable Connectivity and Quality Infrastructure, the G7 Build Back Better World (B3W), and the G20 principles for quality infrastructure investment.

Like Japan, both France and Germany have openly backed the Philippines’ 2016 Arbitral Award on the South China Sea, while deploying warships to uphold freedom of navigation across the Indo-Pacific region. At once, middle powers such as Japan and the EU are ameliorating the massive trillion-dollar infrastructure spending gap in Asia as well as empowering smaller regional states in the face of a resurgent China.

There is no consensus on the exact definition of the concept of “middle power,” which can be traced back to the works of Mencius, Giovanni Botero, and L’Abbé de Mably. But what all middle powers have in common are the three elements of (1) “credibility,” namely, the trust and respect of the majority of nations; (2) “creativity,” translated to proactive multilateral diplomacy; and (3) “capacity,” or the ability to project power, withstand pressure from superpowers, and pursue broadly independent foreign and defense policies.

Clearly, Japan and the EU possess all these three key elements in varying degrees, making them the indispensable middle powers of the 21st century. As for the Philippines, we are definitely not a “small country,” since we are among the 15 most populous nations and 30 biggest economies (in purchasing power parity) on earth.

Our country can clearly become a middle power in its own right, especially if we elect competent and strategically-minded leaders as well as work with like-minded powers beyond the narrow, zero-sum confines of the US-China imperial competition. To succeed, we should dare to be truly independent in this century.