Marcos years: Golden age of what? 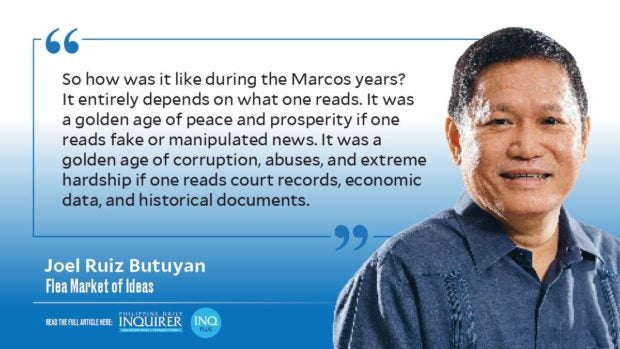 There’s a raging debate on social media between supporters and critics of presidential candidate Ferdinand Marcos Jr. His supporters believe that the reign of Marcos Jr.’s father, the late dictator Ferdinand Marcos Sr., was our country’s golden age of peace and prosperity. His critics claim, however, that it was our country’s golden age of corruption, abuses, and economic hardship.

Marcos supporters point to the supposed transformation of Filipinos into a disciplined people when Marcos Sr. imposed martial law. They cite the drop in crimes, peace in the streets, and the disappearance of boisterous activists.

Marcos critics point out, however, that the kind of peace that prevailed then was the peace of the dead and the brutally silenced. While private criminal groups were reduced in the early days of martial law, Marcos Sr. transformed the combined police and military forces into one big criminal organization. Crimes did not disappear, in other words. Criminal gangs were divested of the means to commit crimes, but monopoly over the commission of crimes was handed over to police and military forces who went on to commit massive incidents of illegal arrests and detention, horrible cases of torture, and horrific killings.

The human rights abuses that the Marcos dictatorship committed are documented by United States and Philippine court decisions. Our Congress even passed a law creating the Human Rights Victims’ Claims Board, and it set aside P10 billion to compensate 70,000 victims of those dark years. The Nobel Peace Prize-winning organization Amnesty International reckons that 70,000 people were jailed, 34,000 were tortured, and 3,240 people were killed under the Marcos regime.

Marcos critics point out records that these infrastructure achievements were accomplished through massive foreign debts that we have been forced to pay for 40 years or until 2025. Under the Marcos regime, the country’s foreign debt skyrocketed from $599 million in 1966 to $26.7 billion in 1986, or a whopping 45 times increase. Incidents of massive corruption tainted these debts. In 1984 and 1985, our gross domestic product contracted to negative 7.32 percent and negative 7.31 percent, and for the only time in our history, our country defaulted on the payment of its foreign debt. The prices of basic commodities tripled, such that what cost P100 in 1976 went up to as high as almost P400 when the Marcoses left. Poverty worsened, with six out of 10 families rendered poor by the time the Marcos rule ended.

Marcos supporters claim that Marcos Sr. dismantled the oligarch families. He divested a number of oligarch families from their businesses all right. But he either confiscated their businesses or co-opted them, and he installed himself as the biggest oligarch. He created a new breed of oligarch, his cronies, who acted as his dummies. When Marcos was driven out of power, his cronies confessed to their dummy roles and they surrendered billions to the government.

Marcos supporters claim that corruption during the Marcos regime was not as bad as it is now. They speak the truth. However, whatever corrupt culture we now have was nurtured to its beginnings during the Marcos dictatorship. Moreover, the amount of money stolen by the Marcoses is nothing to be sneezed at even by today’s corruption standards. The World Bank and the United Nations Office on Drugs and Crimes accused the Marcoses of having stolen as much as $10 billion from our country. So far, our government has recovered P174.2 billion of that ill-gotten wealth.