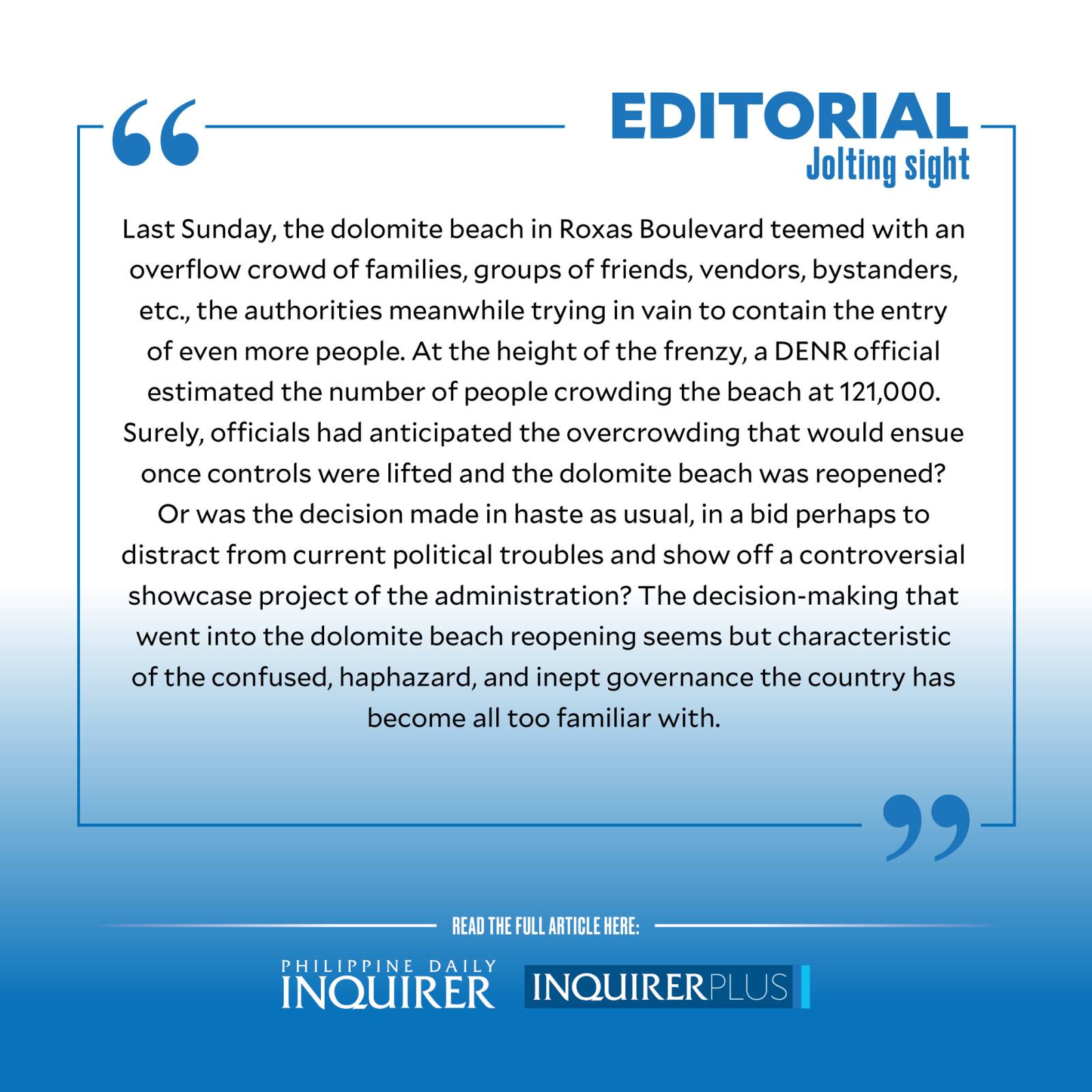 There is an idiomatic expression that refers to “closing the barn door after the horse has bolted.” This means trying to “rectify a problem after the damage has already been done.” Too little, too late, in other words.

This may well describe what transpired with the recent reopening to the public of the so-called “dolomite beach,” the project of the Department of Environment and Natural Resources (DENR) that tried to create an artificial beach on the shores of Manila Bay. Aside from the astronomical cost in public funds that went into creating the beach, issues were raised, too, about the inadvertent environmental damage that could have been better (and more cheaply) addressed by, say, replanting mangroves in the polluted waters.

Now a new, even more urgent issue hounds the project and its creators. Suddenly freed from over a year of “house arrest” to contain the spread of COVID-19, many Metro Manilans have flocked to Roxas Boulevard to savor a bit of fresh sea air and freedom of movement. Last Sunday, the strip of dolomite teemed with an overflow crowd of families, groups of friends, vendors, bystanders, etc., the authorities meanwhile trying in vain to contain the entry of even more people.

“We tried to close the gate and limit the crowd to say 1,000,” an official explained afterwards, “but what happened was that, there was congestion outside. Outside the gates, the space is narrower. Thousands of people were in line and they were close to one another.”

At the height of the frenzy, a DENR official estimated the number of people crowding the beach at 121,000. Footage from TV news shows showed that aside from antsy adults, among the revelers were young children and even a baby in the arms of his/her mother. A potential “superspreader” event if ever there was one.

Understandably, health authorities were alarmed. Department of Health spokesperson assistant health secretary Rosario Vergeire reminded national government agencies to see to it that safety protocols are implemented. In particular, she called on the DENR and the Department of the Interior and Local Government, which have direct responsibility for regulating the number and the movements of the people visiting the area, because “despite opening these areas for this kind of activity since it is outdoors, mass gatherings are still prohibited.” Speaking in Filipino, Vergeire warned that if the congestion at the dolomite beach happens again and triggers an outbreak, “we will go back to the previous restrictions and we do not want that.”

In reaction, government agencies scrambled to rectify the situation. Philippine National Police chief Gen. Guillermo Eleazar reminded Manila police to keep a closer watch on the arrival and behavior of the crowds. Even Malacañang had to put in a word edgewise. Presidential spokesperson Harry Roque appealed to the public to not bring children to the site, saying children (below 12 years of age) are still not allowed to leave their homes unless for “essential purposes.” The country, reminded Roque, is still under a pandemic, even if daily cases have started decreasing, and the public should not be “complacent.”

Bristling at the unsavory headlines, Manila City Mayor (and presidential candidate) Francisco “Isko” Moreno, in whose jurisdiction the dolomite beach lies, challenged the Inter-Agency Task Force for the Management of Emerging Infectious Diseases or IATF to file charges against the DENR officials who were in charge of the project and thus responsible for the negligence on display. Sen. Nancy Binay also proposed the temporary closure of the beach, arguing that the DENR “must come up with a system first before again opening the artificial beach to the public.” A sensible suggestion, given the jolting sight last Sunday.

Later in the week, DENR Secretary Roy Cimatu announced that Director Jacob Meimban Jr. had been dismissed from his post as ground commander of the dolomite beach site, though he continues to serve in other posts in the department.

Surely, DENR and other officials had anticipated the overcrowding that would ensue once controls were lifted and the dolomite beach was reopened? Or was the decision made in haste as usual, in a bid perhaps to distract from current political troubles and show off a controversial showcase project of the administration? The decision-making that went into the dolomite beach reopening seems but characteristic of the confused, haphazard, and inept governance the country has become all too familiar with.