Once upon a time Ombudsman Samuel Martires said, incorrectly, that cases against corrupt government officials could not move forward because no one wanted to testify against them. (The case of the late Dr. Roland Cortez, former medical director of the National Center for Mental Health who filed a plunder complaint against its officials, belies this.)

Now he appears to be promoting a culture of obliviousness among Filipinos. In a draft bill recently submitted to the House of Representatives, he formalized his intention declared early in September at the hearing on the proposed budget of his office for 2022: that comments on the statements of assets, liabilities, and net worth (SALNs) of people in government be prohibited under pain of punishment.

Martires claims that in seeking to amend Republic Act No. 6713, or the Code of Conduct and Ethical Standards for Public Officials and Employees, he is not proposing a ban on the publication of SALNs altogether. He claims neither “censorship” nor “any restriction on the freedom of speech or expression” in his proposed legislation. Just this: “Such use by news and communications media shall be strictly limited to reporting of facts provided in the statement, and no further commentaries could be made thereon.” Violators will be dealt with in terms of imprisonment not exceeding five years or a fine not exceeding P5,000, or both, per the draft bill, which, the man helpfully points out, “is still subject to scrutiny, refinement and deliberation” by Congress.

Predictably, the proposed legislation has provoked protest, as well as such wry commentary as that from the human rights lawyer Jose “Chel” Diokno: SALNs are public documents that Filipinos have a right to scrutinize in order to ensure that no one is enriching him/herself while holding public office. The Ombudsman should help give teeth to the drive against corruption instead of busying himself elsewhere. 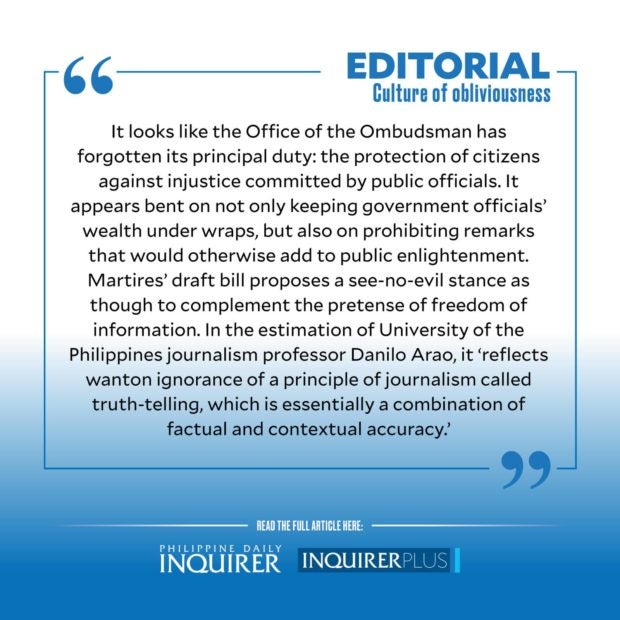 Not that, to begin with, gaining access to so vital a public document is a walk in the park. Under Memorandum Circular No. 1 earlier issued by Martires, apparently having been convinced that reportage on SALNs amounted to the smearing of public officials, the document may be released only under these conditions: if the request were made by the government official who filed it or his/her representative; if a court had ordered it in connection with a pending case; or if it were sought through the Office of the Ombudsman’s field investigation office as required in a fact-finding probe.

Consider the red tape that the memorandum circular has inflicted on the public right to transparency, as upheld in RA 6713. In a report on July 26, 2021, the Philippine Center for Investigative Journalism (PCIJ) — which collects SALNs in the course of looking into allegations of corruption against government officials and making public the wealth statements of all presidents since Corazon Aquino—said it had again come to a “dead end” in its request for a copy of President Duterte’s 2020 statement. In fact, the President’s SALN “has been a secret for three years — from 2018 to 2020 — despite guarantees under [RA] 6713 of the public’s right to know about officials’ assets, liabilities, net worth, and financial and business interests,” the PCIJ said. (In contrast, the office of Vice President Leni Robredo released her 2020 SALN six days after the PCIJ made its request.)

But it looks like the Office of the Ombudsman has forgotten its principal duty: the protection of citizens against injustice committed by public officials. In this instance, it appears bent on not only keeping government officials’ wealth under wraps, but also on prohibiting remarks that would otherwise add to public enlightenment. Martires’ draft bill proposes a see-no-evil stance as though to complement the pretense of freedom of information. In the estimation of University of the Philippines journalism professor Danilo Arao, it “reflects wanton ignorance of a principle of journalism called truth-telling, which is essentially a combination of factual and contextual accuracy.”

And why, the weary observer might want to know, be oblivious to the SALN of, for example, Sen. Bong Revilla—granted it’s accessible — given the peculiar details of his wealth and business transactions? Revilla was cleared of plunder charges in December 2018 by the Sandiganbayan in connection with the P10-billion pork barrel scam (although his chief of staff, Richard Cambe, was found guilty and committed to the national penitentiary, where he died earlier this year). Yet, the antigraft court ordered the senator to return P124.5 million to the national treasury, which he has refused to do.

Why ban commentary on it, and thereby jog public memory?