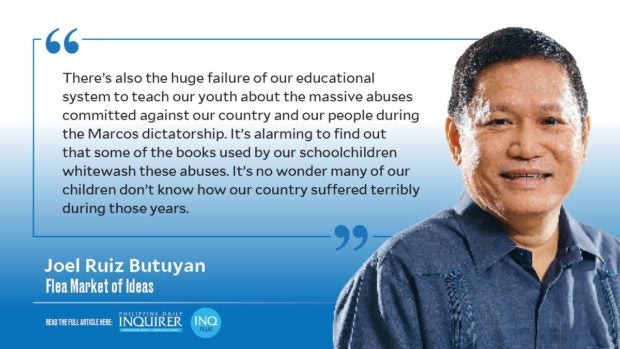 A week after our presidential candidates were officially made known, Ferdinand “Bongbong” Marcos Jr. is emerging as a huge front-runner. If elections were held today, he would become our country’s next president.

In the most recent Pulse Asia Survey, Marcos Jr. garnered 15 percent of the votes, second to Sara Duterte’s 20 percent. But with the latter officially out of the running (at least at this time), Marcos Jr. leads all other candidates. This is also confirmed by informal surveys made by various groups online. What explains this resurgence of the Marcoses, even in the face of well-documented and court-decided evidence of massive corruption and human rights abuses during the Marcos dictatorship?

One explanation offered by analysts is that, after Marcos Jr. lost the 2016 vice presidential race, the Marcoses and their supporters quietly embarked on overhauling the Marcos image in online platforms patronized heavily by the masses like TikTok and YouTube. Marcos myths have been circulating online in short videos, brief documentaries, and concise write-ups. Even if many of these are based on misleading, manipulated, or blatantly fake facts, they have been effective because they’re short, light, and emotionally appealing presentations. Arrayed against the facts-heavy articles and documentaries against the Marcoses which are long and boring, the entertaining and melodramatic videos and documentaries espousing Marcos myths have effectively portrayed the Marcoses as victims instead of the abusers that they truly were.

It has also helped that the Marcoses cultivated a veneer of dignity when they’re confronted with allegations of corruption and human rights abuses. Their silence or muted protestation every time hostile activists or angry leftist groups confront them have projected for them a posture of respectability. They’ve tapped into the paawa effect to their advantage.

There’s the factor of regionalism for the Ilocano-speaking provinces of Northern Luzon. This sense of regionalism that favors Marcos Jr. is at its most intense when it comes to Vice President Leni Robredo. She’s viewed as the woman who beat Marcos Jr. for the vice presidency, and Marcos supporters cannot forgive her for that. But there are youth groups in the north defying regionalism, and they may yet deliver a chunk of defiant votes for Robredo.

There’s also the huge failure of our educational system to teach our youth about the massive abuses committed against our country and our people during the Marcos dictatorship. It’s alarming to find out that some of the books used by our schoolchildren whitewash these abuses. It’s no wonder many of our children don’t know how our country suffered terribly during those years.

Finally, there’s the very flawed view held by a sizeable number of our countrymen that the biggest reason our country suffers from poverty, violence, and corruption is because Filipinos are an “undisciplined people.” And the misguided solution yearned for is to elect a leader in the mold of a dictator who will strong-arm his or her way into making these problems disappear. This widely held view propelled Rodrigo Duterte to the presidency, and is now propelling Marcos Jr. in the same trajectory.

It’s a view similar to the one held by a battered wife who blames herself for the repeated violence committed against her by her husband. Many of our countrymen are suffering from “battered woman syndrome,” propagated by abusive leaders who have successfully schemed to divert blame away from themselves. This should make us pause and think that shaming and demeaning our countrymen who hold this view may not be the right approach.

One of the aims of those advocating for change in the coming elections must be to convince our countrymen to believe that there’s nothing inherently wrong with us as a people. This has been demonstrated a million times by Filipinos who prosper and excel when they migrate to foreign countries governed by the right leaders. Everything that’s wrong in our country lies in our leaders, and not in our people. Change will only come if we elect leaders who respect, cherish, and treasure us, the Filipino people.