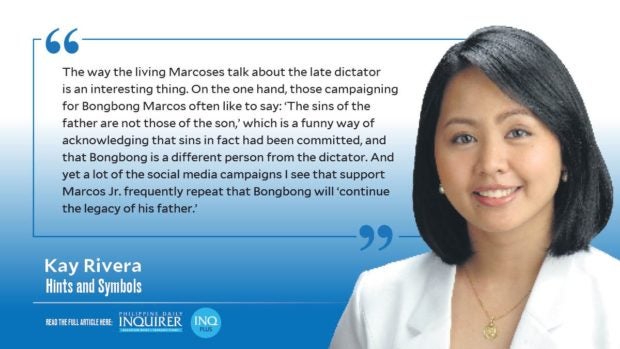 The way the living Marcoses talk about the late dictator is an interesting thing. On the one hand, those campaigning for Bongbong Marcos often like to say: “The sins of the father are not those of the son,” which is a funny way of acknowledging that sins in fact had been committed, and that Bongbong is a different person from the dictator. And yet a lot of the social media campaigns I see that support Marcos Jr. frequently repeat that Bongbong will “continue the legacy of his father.” The infamous Toni Gonzaga interview somehow capitalizes on this loyalty to the father as well.

Sen. Imee Marcos is a little more savvy. While remaining stoic and silent on her mother’s court cases and never acknowledging the existence of ill-gotten wealth, she carefully distances herself from the more unsavory parts of her family’s history. In a classic gaslighting move, she recently chided the public for focusing on divisive pro- and anti-Marcos politics: “Hindi ko nga maintindihan ‘yong mga isyu ng tatay ko na one million years ago eh, nauungkat,” she said this week in a radio interview, saying that the nation has more serious issues such as the pandemic to think about.

Overall, the Marcos siblings can’t seem to decide one consistent way they should handle the topic. While never admitting to the fact of extrajudicial killings, the suppression of press freedom, and ill-gotten wealth, they seem quite free with expressing admiration for whatever infrastructural improvement or economical gains came to be during the dictator’s term. In a 2011 interview with Jessica Soho, Bongbong Marcos spoke of his father’s plans and how they would have further enriched the nation, likening this hypothetical future Philippines to an evolved, wealthy nation like Singapore: “Alam ko ‘yung plano nila noon. Alam ko ‘yung plano ng aking ama,” speaking of some awareness, if not involvement, in his father’s political plans. And yet we’ve heard Imee Marcos say, in reference to her father’s time, “Ang liit liit ko pa noon,” which has since been exposed to be a blatant lie. Her recent exaggeration that the issues belong to a time “a million years ago” serves again to distance her from any accountability during her father’s rule.

I write this because of some frustration at the way we are conveniently being told to move on from the issue of the Marcos dictatorship and the agonies of martial law when one of the Marcos children has set their eyes on the presidency. Imee Marcos also told us to “move on” in 2018, the same year her mother Imelda was convicted of seven counts of graft.

Like the Marcos siblings, I cannot talk of the Marcos era without thinking of my family. While I did not live “a million years ago,” my father, political detainee and martial law victim, and his siblings were alive 40 years ago. We still know family and friends who witnessed and experienced atrocities firsthand. We still know people, now aunts and uncles getting along in age, who know the taste of tear gas and the feeling of the butt of a rifle because they lived and protested during that time. Their stories are our tether to reality and our concrete link to a dark history that has been internationally documented. It’s because they are still alive, and have lived long enough for their stories to be twisted and distorted by this new age of propaganda, that I keep writing about the issue, again and again; because we, too, would like to move on, but not at the cost of sitting idly by while history is distorted. Perpetrators, and those adjacent, have no right to tell victims to move on.

I would like to tell the good senator, we would like to move on, too. If only you’d let us by acknowledging the harm your father’s term inflicted on our families, the extent to which you have benefited, and the wealth that needs to be returned. I can imagine that one day we as a nation might be able to “move on” from the Marcos issue—taking only the lessons of the past without getting bogged down by leftover political quarrels and personality politics. However, the first step should be on the part of the family to acknowledge, make reparations, and serve time where needed. Until then, I cannot imagine that we can be ready to talk about the Marcos children’s political careers without speaking of their father.