The same thing over and over again 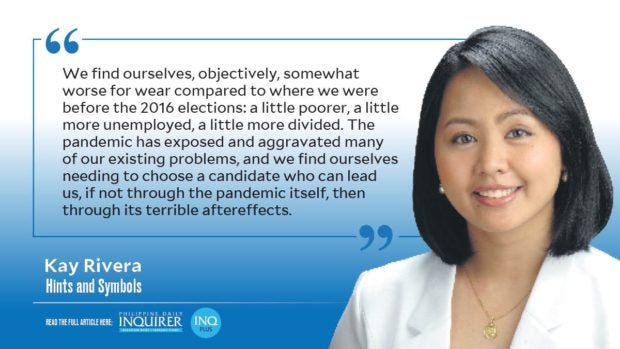 Days after the deadline for filing of candidacy, the atmosphere is more politically charged than ever and social media is filled with presidential candidates and their supporters taking swipes at different camps. Mayor Isko Moreno himself had disparaging comments to make about Vice President Leni Robredo, who in turn made it clear that preventing a Marcos return to power was a not unimportant motivation to run for president. Bato dela Rosa has now declared his own presidential bid, a proposition equally comical and worrying, as concerns rise about a last-minute candidate substitution.

We find ourselves, objectively, somewhat worse for wear compared to where we were before the 2016 elections: a little poorer, a little more unemployed, a little more divided. Criticisms of Maria Ressa’s Nobel win notwithstanding, press freedom has also taken several hits. The health care system is clearly struggling. The pandemic has exposed and aggravated many of our existing problems, and we find ourselves needing to choose a candidate who can lead us, if not through the pandemic itself, then through its terrible aftereffects. So who among this motley crew would be most suitable?

I’ve read some social media testimonies of those who were initially impressed by our current President’s credentials and hopeful for change, but grew disillusioned later on. They’ve said that they couldn’t have known how things would turn out when they cast their ballot for the man famous for making Davao “safe” and “prosperous.” I would argue, however, that warning signs were there from the start.

Going back through articles written in the Opinion section of various papers in 2016, during President Duterte’s educational campaign, is a thought-provoking experience. Some writers were cautious, while some were outright censorious, but in general, there was a pervasive concern about how Mr. Duterte viewed criminality and the “drug problem,” and how this reflected his and his supporters’ view of human rights. In 2015, long before Mr. Duterte announced any intention of running for president, the Human Rights Watch already denounced the extrajudicial killings linked to the Davao Death Squad. This would have been alarming enough, but Mr. Duterte’s words at the time offered no reassurance: “I offer no excuses nor do I apologize. So be it.” He was also heard to say about the crime rate in Davao: “We’re the ninth-safest city. How do you think I did it? How did I reach that title among the world’s safest cities? Kill them all [criminals].”

We probably couldn’t have predicted some of the most distressing parts of the public face of the presidency: the late-night nonsensical speeches, the shameless show of sycophancy by one crony after another, the quotes needing reinterpretation or “taken out of context.” But we actively chose someone to be our president who clearly, from the start, showed a lack of concern about human rights among less socially advantaged groups, and a refusal to acknowledge concerns about human rights violations as legitimate. It should have made sense from the outset that these are the fundamental things we should have considered non-negotiable. Without a culture of respect for human rights and a willingness to listen to input, the rest will follow: corruption, a disrespect for due process, quick and savage retaliation against critics as well as the close-mindedness to avoid constructive input.

If we’re truly hungry for change, we must ask ourselves who among the disparate crew of presidential candidates is concerned about these fundamental things. That the next president should not have a history of corruption or dishonesty should be clear; that they should be competent, open to criticism, and experienced in politics should be desirable. These are things that should go without saying, and things that a millennial voter like myself shouldn’t lecture on about. However, given our conversations on social media these days, it’s plain to see that we are still considering voting into office those who have a record of incompetence, cronyism, and corruption, and those who have shown the same disturbing, ruthless, “kill-them-all” attitude displayed by the President. Insanity is said to be doing the same thing over and over again and expecting different results. If we vote into office a person made of the same stuff, how would we expect a different, better outcome?