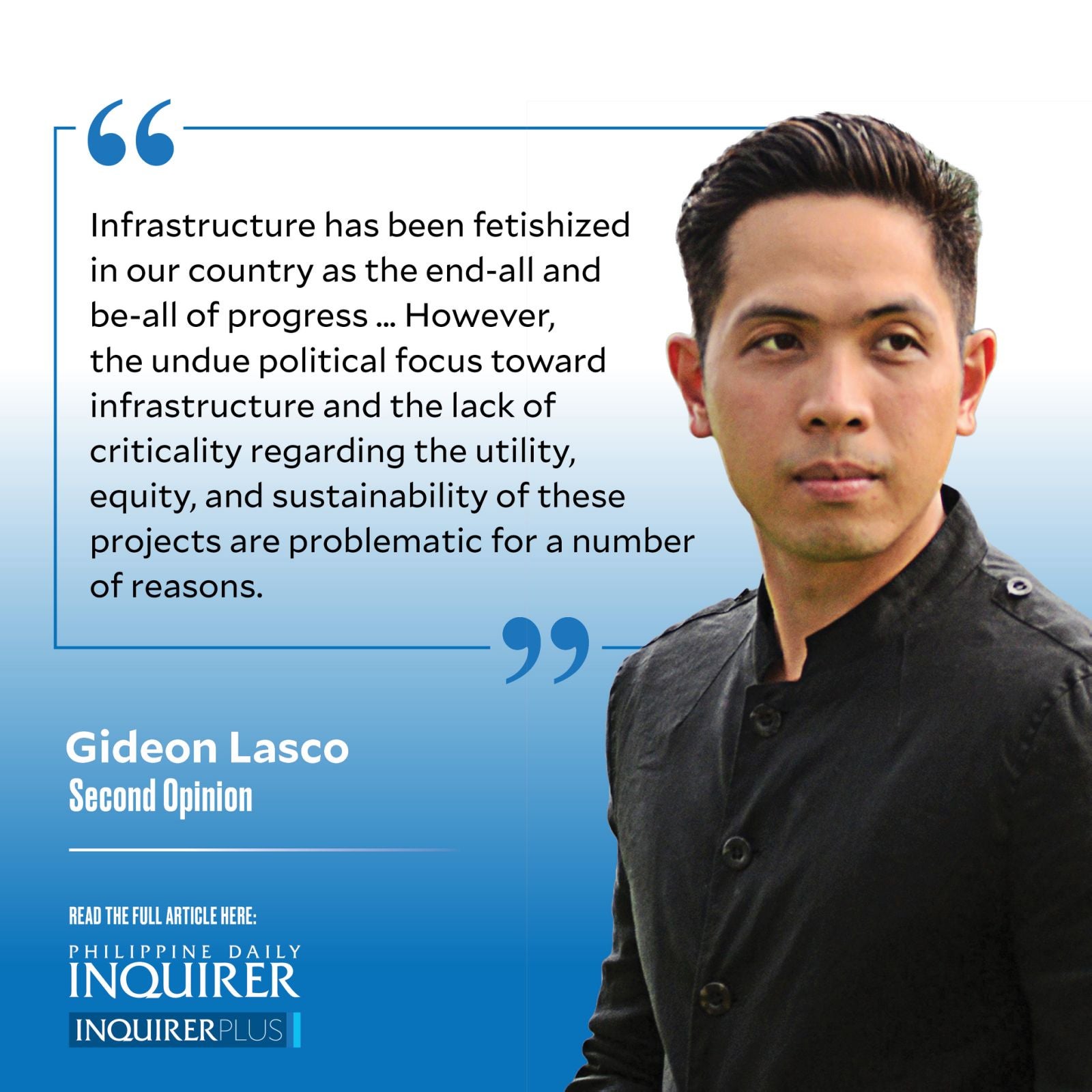 If we were to hold a survey about how people measure the accomplishments of our public officials—presidents, governors, mayors, and even lawmakers—infrastructure will doubtless rank high, from roads and highways to hospitals, airports, and even provincial and municipal capitols. This is because infrastructure has been fetishized in our country as the end-all and be-all of progress.

Ferdinand Marcos knew this, which is why he matched his political ambition with ambitious, if ill-conceived, projects, many of which are still around. Some might dismiss the construction of buildings like the Cultural Center of the Philippines and the ill-fated Manila Film Center as part of Imelda’s “edifice complex,” but there was actually a political logic to it—one that is proving its worth even today, as such construction projects are held up by TikTok historians as “evidence” of a golden age that never was.

The succeeding presidents knew this just as well: Fidel V. Ramos held up the Skyway project as the solution to the heavy traffic in Manila in the 1990s, and Erap was quick to share the credit once it was completed. “This is just the beginning,” he proclaimed on its inauguration on Dec. 10, 1998, adding: “… and investors can look forward to other profitable projects in other parts of the country in similar toll roads, mass transit systems, and other areas such as power plants, irrigation facilities, railroads, airports, and seaports.” Subsequently, GMA’s “Strong Republic,” P-Noy’s PPP (public-private partnership), and Duterte’s “Build, build, build” have all involved infrastructure, with the latter’s promises of a railway system in Mindanao helping to concretize his anti-Imperial Manila stance in his supporters’ imagination.

This is not unique to our country—or our time. From senators in the ancient Roman republic to those in Biden’s America, infrastructure projects have been linked to political fortunes and thus subject to intense debate. Drawing from Karl Marx, we can call these projects a “commodity fetish,” that is, in the words of Cohn (2004), “objects considered valuable because of the imaginary social relations that they imply as opposed to their usefulness.”

There is no denying the value of infrastructure—and if political fortunes can align with people’s needs, why not? I would still want to see a railway built, not just in Mindanao but all over the country, linking Manila, Cebu, and Davao the way Tokyo is connected to Osaka and Fukuoka by shinkansen. And however much we would like to romanticize villages accessible only by trail, the people who actually live in those villages will tell you that they’re still waiting for the farm-to-market road that many a politician had promised them.

However, the undue political focus toward infrastructure and the lack of criticality regarding the utility, equity, and sustainability of these projects are problematic for a number of reasons.

First, it creates an opportunity for political and economic interests to align. Even if it is to the detriment of the people, its misrecognition as such means that its proponents can get away with it. Today, we are seeing this with projects like the Kaliwa Dam and the Pasig River Expressway (PAREx), which, while vociferously objected to by experts and local communities on the grounds of social and environmental harm (e.g. the Kaliwa Dam’s damage to the Sierra Madre and the Dumagat communities) and inequity (e.g. the PAREx will not benefit the majority who use public transport), have not attracted sufficient opposition to dissuade politicians.

Second, it detracts attention from more sustainable, more important—although less visible—solutions. As a medical anthropologist, I have seen this in our health sector, where local government units and national officials alike have always gravitated toward big-ticket projects like tertiary medical centers, even as our barangay health centers and primary care services are neglected. From “mega rehab centers” to “mega vaccination centers,” there is no shortage of examples during the Duterte administration in which infrastructure is used to simplify complex problems.

Finally, it reinforces a now-repudiated vision of progress that is focused on construction at the expense of conservation. Alas, at a time when progressive cities are tearing down their highways to make way for walkways, bike lanes, and green spaces, and at a time of ecological crises, we are stuck with officials who think that “Build, build, build” is the way forward.