With only about eight months to go before the end of its term, the Duterte administration is making belated moves to demonstrate that it is pursuing accountability for the thousands of lives of mostly poor Filipinos killed in the name of its brutal war on illegal drugs.

Last Sunday, Justice Secretary Menardo Guevarra announced that 154 policemen would be investigated for possible criminal liability for their involvement in anti-narcotics operations that led to the deaths of 52 suspects. “The DOJ noted that based on the facts gathered by the PNP (Philippine National Police) internal affairs service, the police officers involved in these cases were not only administratively liable; the existing evidence pointed to their possible criminal liability as well,” said Guevarra.

The erring policemen may be indicted for homicide or murder, added Justice Undersecretary Adrian Sugay.

Then on Tuesday, Guevarra said the Department of Justice had begun the examination of at least 100 operations conducted by the Philippine Drug Enforcement Agency that also resulted in the killing of drug suspects. The investigation will not end with the 154 policemen, stressed Guevarra, and that the DOJ will go “wherever the evidence will lead.” 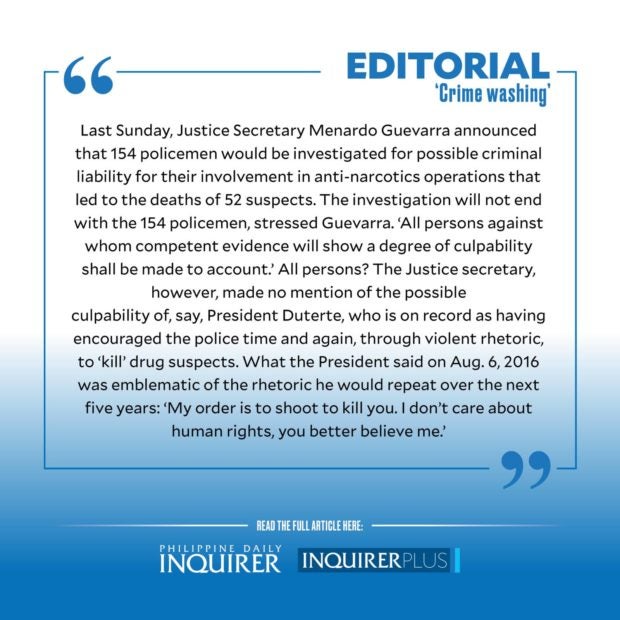 “If in the course of the investigation it would appear that other persons were likewise involved in any capacity whatsoever, so be it. All persons against whom competent evidence will show a degree of culpability shall be made to account,” Guevarra declared.

All persons? The justice secretary, however, made no mention of the possible culpability of, say, President Duterte, who is on record as having encouraged the police time and again, through violent rhetoric, to “kill” drug suspects. What the President said on Aug. 6, 2016 was emblematic of the rhetoric he would repeat over the next five years: “My order is to shoot to kill you. I don’t care about human rights, you better believe me.”

The launch of the probe by the International Criminal Court against Mr. Duterte and cohorts for possible crimes against humanity may be having the salutary effect of now prodding the administration to shift its tone from the rabid defense of the President’s pet drug war to seeking some appearance of reckoning for police misconduct.

But that the administration seems suddenly fired up on this issue did not impress activists and human rights groups, who noted that the deaths being investigated are but a minute fraction of the staggering body count in the drug war. The number of cases cited by Guevarra was barely 0.9 percent of the total deaths based on the PNP’s own data, according to House Deputy Minority Leader and Bayan Muna Rep. Carlos Zarate. “Why limit the filing of cases to 52 killings of drug suspects only when the PNP itself admitted that there were 6,000 drug suspects, more or less, who were killed since July 1, 2016, in this bloody drug war?” asked Zarate.

The small number of cases to be examined was “highly unacceptable and may be interpreted as an attempt at ‘crime washing’ the culpability of law enforcement officers and their agents in the dubious ‘nanlaban’ narrative,” he added.

Calls to expand the investigation do have basis: The DOJ itself told the United Nations Human Rights Council (UNHRC) in February this year that more than half of the anti-drug operations it reviewed showed that the police “failed to follow standard protocols,” and had “asserted” the “nanlaban” to justify how suspects were killed after they supposedly “resisted arrest or attempted to draw a weapon and fight back.”

“Yet, no full examination of the weapon recovered was conducted. No verification of its ownership was undertaken. No request for ballistic examination or paraffin test was pursued until its completion,” Guevarra admitted to the UNHRC.

Human Rights Watch senior researcher for the Philippines Carlos Conde likewise dismissed the DOJ’s gestures as window-dressing. “All the fuss,” he said, was designed to show the world that the Philippines was doing something when “in truth, nothing significant has been done,” and that the DOJ’s belated probe is a mere “continuation of the Duterte administration’s attempt to misinform and mislead the international community about the situation in the Philippines.”

The DOJ’s pronouncements were particularly suspect, Conde pointed out, because these coincided with the session of the UNHRC and came just weeks after the ICC declared that it had authorized an official probe into the conduct of President Duterte’s centerpiece domestic policy.

The DOJ has only months to go to disprove such suspicions and show that it can conduct, at minimum, a thorough, credible probe that should go all the way to the top of the chain of command if need be. Can it do it? Guevarra may yet surprise the public, but at this point, weary citizens should be forgiven for not holding their breath.