Get out of the box | Inquirer Opinion
Close
menu
search

Get out of the box 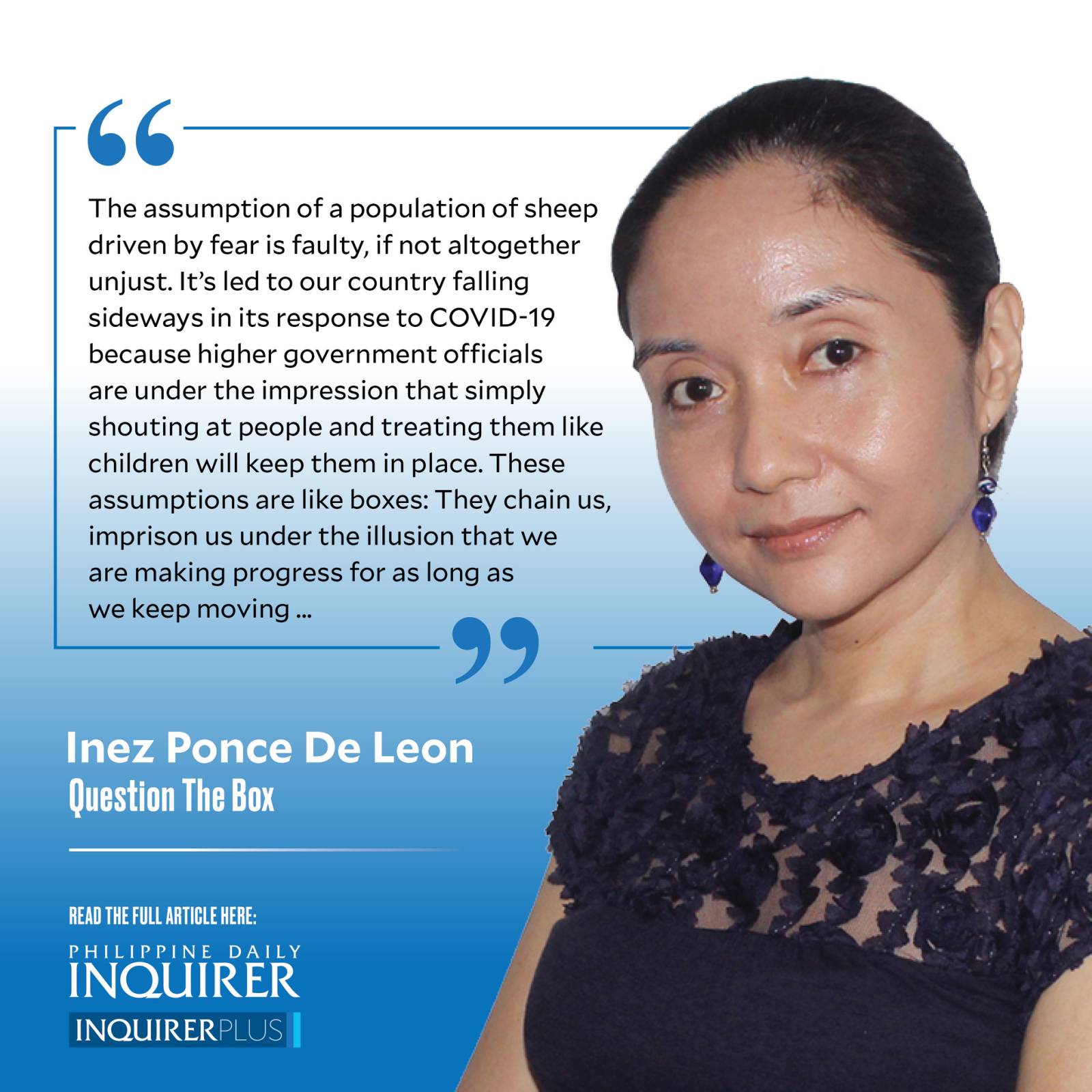 Hello, I’m Inez, and I’m a scientist (the social kind).

Most people think that all scientists have no social interactions, can barely talk like normal human beings, and yet have all the answers that will conclusively put all our problems to rest. I have since found out that the task of science is not to establish finality, but to press on with searching for knowledge in systematic ways. Scientists are always curious, and they spend their lives asking questions and pursuing answers to them. There are many ways to ask questions. In my particular sub-field, science communication, we question assumptions that we once thought were true, and scrutinize notions that we once thought were commonsense or intuitive. We question these notions, assumptions, and commonplace beliefs because they can hold us back from understanding our problems.

For example, we question the notion of the “masa”: a single homogeneous public that can be persuaded to do anything and vote for anyone. We question the assumption that simply telling people what to do, in the prettiest colors and the nicest fonts (or in the harshest words possible), will make them do things immediately. Such a responsive, impulsive public is as frightening as the crowds that raised their hands in a salute and chorused “Heil Hitler!” as the Fuhrer passed.

The assumption of a population of sheep driven by fear is faulty, if not altogether unjust. It’s led to our country falling sideways in its response to COVID-19 because higher government officials are under the impression that simply shouting at people and treating them like children will keep them in place.

These assumptions are like boxes: They chain us, imprison us under the illusion that we are making progress for as long as we keep moving, make us labor under the delusion that if we keep on doing the same thing that we’ve been doing, then maybe, just maybe, one day, things will change.

Well, things haven’t. We still need the education sector to shape up. We need to strengthen the health care sector. Elections are coming and mudslinging is so rampant, we hear nothing but filth coming out of the President’s mouth.

And we’re still in the same mess we were in when 2020 came along and a virus looked at us and said, “Oh look, face shields. How quaint.”

So: What is this column about? It’s the place where I invite you to think along with me, and to question the boxes in which we place ourselves. Maybe we assume some things about the world, and these assumptions need to change. Maybe we’re too comfortable in our old notions of how things should be run. Maybe we’ve given up and said, “There’s no hope for this country.”

There is hope. I’ve seen it in my students who actively follow the Senate hearings, and are demanding that the questioning continue even if the President labels it as harassment and a lack of due process. The accused were already given a chance to answer questions, which they refused to do. There is no duress. There is no gun pointed at their head. There are simply issues that need to be addressed, and in a formal setting that demands answers and truth under oath. That’s more due process than the victims of the drug war ever got.

There is hope. I’ve seen it in the elderly who lived through martial law, and who are speaking out against their peers who are apparently suffering some form of amnesia that makes them forget the evils of the Marcos dictatorship. I’ve heard it from taxi drivers who regretted their vote and are willing to take a whole day to queue for registration in next year’s elections, even if they must lose their income in a failing economy.

There is hope. All it needs is a willingness to question the choices we made, and the notions that are holding us back. Do we want a population that simply obeys all sorts of commands without thinking, follows the crowd, and is afraid of all the supposed likes and shares by a troll army that continues to applaud a supposedly popular, yet ineffective leader—or do we want a citizenry that thinks critically? I can imagine that the latter kind of individual is frightening to the leader who simply wants brainless creatures crawling in his wake.

Let’s question these boxes in which we’ve trapped ourselves. And let’s get out of these boxes together.