Tax debt of the Marcos estate 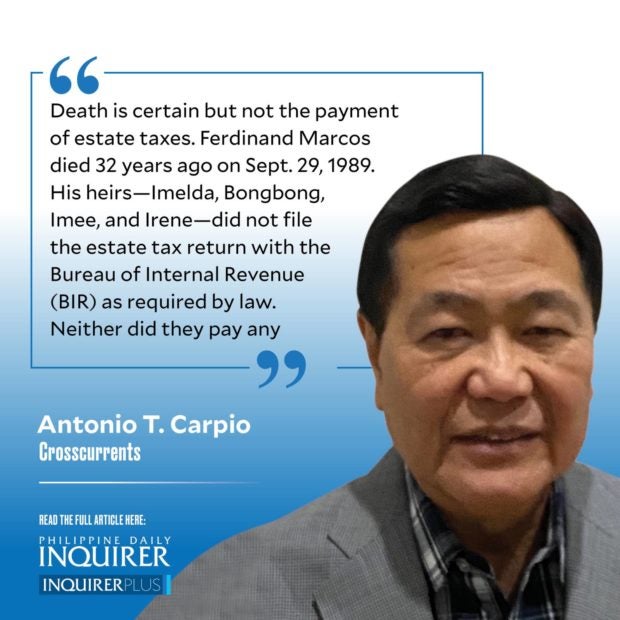 Death is certain but not the payment of estate taxes. Ferdinand Marcos died 32 years ago on Sept. 29, 1989. His heirs — Imelda, Bongbong, Imee, and Irene — did not file the estate tax return with the Bureau of Internal Revenue (BIR) as required by law. Neither did they pay any estate tax.

The BIR computed the estate tax based on the known assets of Ferdinand Marcos at the time of his death, as culled by the BIR from property records in government offices, documents recovered by the government in Malacañang Palace when the Marcoses fled the country in 1986, as well as pleadings filed in court by the Marcos heirs who claimed ownership of the secret foreign bank accounts and other assets of Ferdinand Marcos. The BIR computed the estate tax due on the Marcos estate at P23,293,607,638.

The Marcos heirs simply ignored all the notices sent by the BIR. However, when the BIR served notices to the Marcos heirs that real properties in the name of Ferdinand Marcos would be auctioned off to pay the estate tax, Bongbong Marcos filed a petition with the Court of Appeals questioning the validity of the estate tax assessment on the flimsy ground that the BIR had no jurisdiction over the assets of the deceased Marcos because the assets were in the custody of the probate court.

First, any deficiency estate tax earns 20 percent interest per annum until full payment, in addition to a one-time 25 percent penalty for failure to pay within the prescribed period. Thus, the annual interest payable by the Marcos estate is P4,658,721,527, which 30 years after the finality of the assessment on Oct. 12, 1991 adds another P139,761,645,828 to the principal estate tax of P23,293,607,638. There is still the 25 percent penalty amounting to P5,823,401,909, on which the 20 percent interest per annum is also imposed and now amounts to P34,940,411,454. Second, no property of the deceased can be transferred to any of the heirs until the estate tax is paid. Thus, no Marcos heir can transfer any asset of the Marcos estate in his or her name, or sell such asset until all these taxes are paid.

The BIR must renew written demands on the Marcos heirs to pay these tax liabilities once every five years, otherwise they prescribe and become uncollectable. The Ramos, Arroyo, and Aquino administrations have faithfully issued such written demands. Has the Duterte administration done the same? If not, then it is the greatest gift of President Duterte to the Marcos heirs — waiver of a tax debt to the Filipino people now aggregating P203.819 billion.