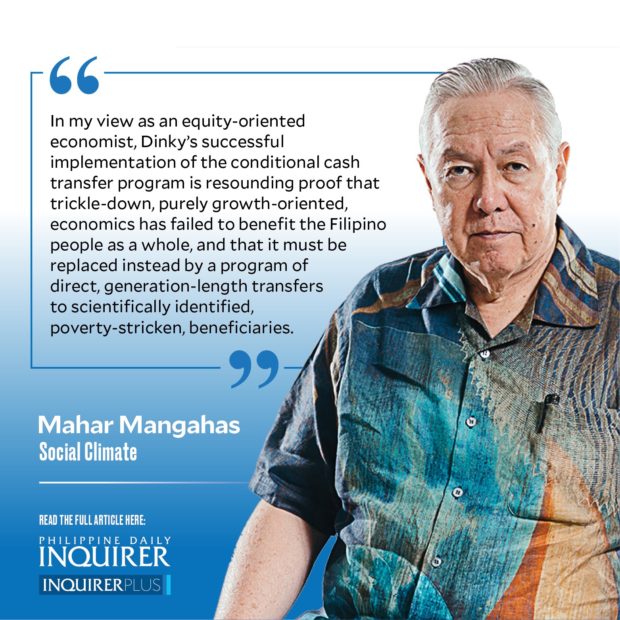 Every day since last Sunday, Sept. 19, has been a day for loyal friends of Corazon Juliano “Dinky” Soliman, who took the sunflower as her symbol, not to grieve her death but to celebrate her life, because that was what she told us to do.

For many months, if not years, already, Dinky had been in very poor health. And so, as her husband Hector Soliman (a lawyer) disclosed last Sunday, she made out a formal will that included her wish that we not grieve conventionally, for nine days or whatever, but instead celebrate her passage from a good life to an infinitely better one. As of Sept. 20, daily masses were already scheduled up to Oct. 2, for the celebrations of 11 groups; more may follow, as there is no time limit.

That was Dinky: not only of such high ideals and principles, but so charismatic as to be very easy to listen to, to agree with, and to follow her lead. And as usual, she’s right: Remembering and celebrating is making it much easier to cope with our grief. In effect, she’s still caring for us, her friends, in her new life.

My wife Thetis and I are celebrating almost five decades of friendship with Dinky, starting in the early 1970s when she and Dinky were roommates at the Sampaguita dormitory in UP Diliman. Dinky was double ninang to our daughter Gica, first in baptism and then in marriage 30 years later. Thetis was a wedding ninang of Marikit Soliman.

It was Hector Soliman, as the very first lawyer of Social Weather Stations, who drafted the SWS by-laws, for our SEC registration in August 1985; so he even pre-dates the formal birth of SWS. Hec and Dinky, early on, both became SWS Fellows (though Dinky disengaged when she joined government service).

Dinky’s contribution to welfare economics. In my view as an equity-oriented economist, Dinky’s successful implementation of the conditional cash transfer program is resounding proof that trickle-down, purely growth-oriented, economics has failed to benefit the Filipino people as a whole, and that it must be replaced instead by a program of direct, generation-length transfers to scientifically identified, poverty-stricken, beneficiaries.

This replacement program is the Pantawid Pamilyang Pilipino Program (4Ps), with its beneficiary families identified through Listahanan, a listing created by an honest, nonpoliticized, management system. The institutionalization of 4Ps and Listahanan without corruption was a spectacular achievement of Dinky Soliman. I think it is critical for the nation to extend them for one or two more generations.

My personal gratitude to Dinky: learning to work in Filipino. This happened in 1987, when a special Cabinet committee, chaired by agriculture secretary Carlos “Sonny” Dominguez, was tasked to recommend an executive order for President Cory Aquino to fulfill her promise of a meaningful agrarian reform, and Winnie Monsod of Neda assigned me to it as a consultant. [I had written the land reform chapter of the 1973 ILO Mission Report, and coauthored the 1976 book “Tenants, Lessees, Owners.”]

Dinky, on the other hand, chaired a coalition of farmers’ groups lobbying for something more radical than Marcos’ Operation Land Transfer, which applied only to rice and corn. To calm the intense speculation about what might happen, Dinky told me that I should explain directly to the farmers the ideas being mulled by the Cabinet; and do it in Filipino, not English, so that they could understand.

Dinky was right, of course, so I could not balk. Though conversion was difficult, I had to jump into it, using many sources for technical terms. I joined the farmers in symposia and radio/television programs that discussed agrarian reform in Filipino. (In the end, much of the Cabinet committee’s work was sabotaged by the insertion of an unheard of “stock transfer system”; but that’s another story.) Now, after years of practice, I am comfortable working in Filipino, and I owe it to Dinky.