Marcos: A dilemma for historians 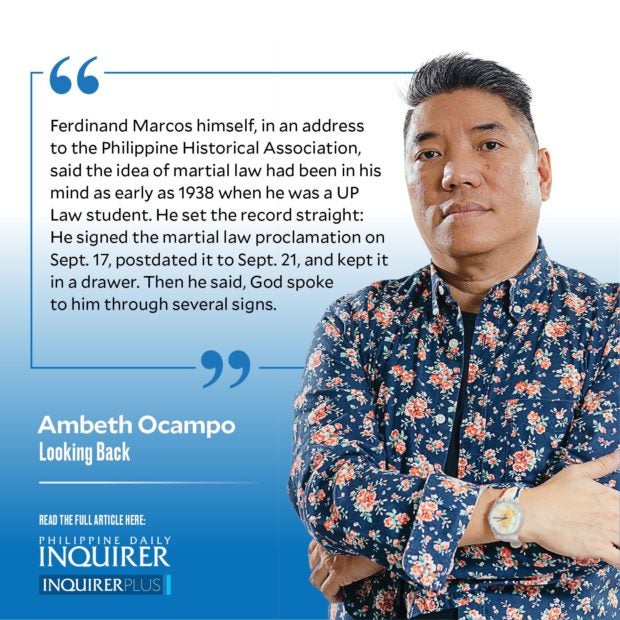 The declaration of martial law (Sept. 21, 1972) is not the same as its actual implementation (Sept. 23, 1972). To complicate matters, Ferdinand Marcos himself, in an address to the Philippine Historical Association, said the idea of martial law had been in his mind as early as 1938 when he was a UP Law student. He set the record straight: He signed the martial law proclamation on Sept. 17, postdated it to Sept. 21, and kept it in a drawer. Then he said, God spoke to him through several signs: “It seems I was being led and guided by some strange greater mind above me, and I felt and knew it. And therefore, even before the ambuscade on Secretary Ponce Enrile, I had already ordered the enforcement of the proclamation … Long before that, I had decided to proclaim martial law.”

The above does not jibe with Marcos’ diaries. On Sept. 14, 1972 at 9 a.m., Marcos informed the assembled chiefs of the Armed Forces that he intended to declare martial law. Before asking if there were any objections, he stressed that this extraordinary act was a legitimate exercise of emergency powers granted to him under the Constitution.

The plan was “to liquidate the communist apparatus, reform our government and society, then have the Con[stitutional] Con[vention] ratify our acts, [and have] the people confirm it by plebiscite, and [afterwards we] return to constitutional processes.” He gave himself 18 months “to cure the ills of our society by radical means, [giving as examples] national corruption, tax evasion, criminality, smuggling, lack of discipline, [and] unequal opportunities.” Marcos ended by ordering everyone present to “keep our noses clean and submerge self-interest.”

In retrospect, everything was alright on paper, but failed miserably in actual execution.

Nobody at that meeting contradicted the Commander in Chief, although two asked for clarification. Constabulary Chief Fidel Ramos advised that the padlocking of media outlets be done by a civilian with military back-up. Army Chief Jose Rancudo suggested that missions be assigned to each branch of service.

On Sept. 18, 1972, Marcos wrote: “We finalized the plans for the proclamation of martial law at 6:00 PM to 10:00 PM with the SND [Secretary of National Defense], the Chief of Staff, major service commanders, J-2 [Deputy Chief of Staff for Intelligence], Gen. [Ignacio] Paz, 1st PC [Philippine Constabulary] Zone Commander, Gen. [Tomas] Diaz and Metrocom [Metropolitan Command] commander, Col. [Alfredo] Montoya with Gen. [Fabian] Ver in attendance. They all agreed the earlier we do it the better because the media is waging a propaganda campaign that distorts and twists the facts and they may succeed in weakening our support among the people if it is allowed to continue.

“So, after the bombing of the Concon, we agreed on the 21st without any postponement. We finalized the target personalities, the assignments, and the procedures. Our communications network will center in Malacañan as before.”

On Sept. 20, 1972, a day before D-day, Marcos wrote: “This afternoon, the General Staff with the SND and the Chiefs of the major services came to see me to submit the Assessment of Public Order wherein they recommend the use of ‘other forms of countering subversion/insurgency should be considered.’ This means they recommend the use of Emergency Powers including Martial Law, formally. Envelope No. XXXV-B.

“Then I gave an interview where we kept silent on Emergency Powers but spoke of listing Criminal syndicates in the Order of Battle, of the communist armed elements, the Self-Reliant Defense Posture as it relates to internal threats, expenditures, additional armaments and personnel etc.

“…Johnny [Enrile] and I again reviewed the proclamation which we again amended. He wrote out the orders on carrying firearms and on control of shipping. While we were working on the list of target personalities, Amb. [Henry] Byroade called … I see him tomorrow at 11:00 AM. I could not sign the proclamation and orders because they have to be re-typed.”

On the night of Sept. 22, Enrile’s car was riddled with bullets in Wack Wack. Next morning, the nation woke up to martial law.