Ferdinand Marcos’ imposition of martial law in September 1972 is a dark memory that has afflicted certain Filipinos for 49 years. Sept. 23 was actually when they awoke to a strangely grim silence — no radio or TV, no newspapers — although Marcos, yoked to a fetish, had slyly moved the fateful date back by two days. The grievous memory should be constantly refreshed in the face of persistent attempts by the dictator’s heirs and their minions to reshape the martial law era into something less sinister but utterly false: a gift to the country they had terrorized and plundered. They have inexhaustible resources to carry out the deceit with the end in view of regaining lost power, to the extent of believing their own fictions.

It’s been a year shy of half a century, yet the Marcos heirs are nowhere near to expressing remorse for the 3,200 victims of extrajudicial killings, the 77,000 detained, the 3,500 tortured, and the more than 700 disappeared, as recorded by Amnesty International and others during the period 1972-1985. In the reckoning of that dark period, which also saw the collapse of the Philippine economy, leaving many mired in poverty and indebtedness, the people behind those numbers should matter still.

They or their survivors may have applied for and received compensation under the Human Rights Victims Reparation and Recognition Act of 2013 (or Republic Act No. 10368), but who can justly say that the money balanced the scales, that it fully paid for their suffering? Certainly not the dictator’s son, Ferdinand Marcos Jr., although he once tried to do so. In a demonstration of the quality of his thinking, he petulantly described the 9,539 victims of rights violations who won the Hawaii class suit against the Marcos estate as motivated solely by financial gain: “Pera-pera lang ang habol ng mga ’yan.” 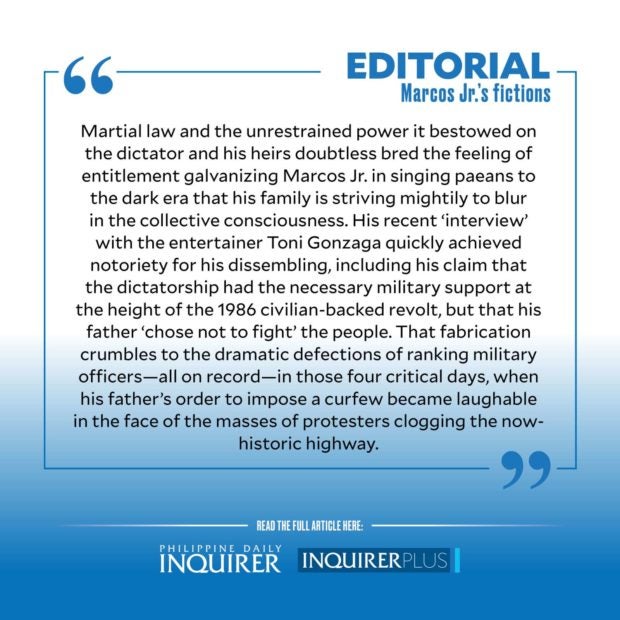 And after all these years, Marcos Jr. still doesn’t get it. Retrieving his thwarted vice presidential ambition from his 2016 defeat at the hands of Vice President Leni Robredo, and pushing it at the Presidential Electoral Tribunal for close to five years, to no avail, he has announced a planned run for No. 1 in 2022. Incredibly, he has also expressed confidence that Robredo, urged by Filipinos who have had enough of abysmal conditions in the administration to seek the presidency herself, would lose to him if and when. The weary observer may wonder: 1) what on earth he thinks he can bring to the table; and 2) if “his ‘manang,’” as Sen. Imee Marcos calls herself, agrees, even if the family fortunes — ill-gotten, according to a Supreme Court ruling, their mother’s seven-count graft conviction, and other official findings — will hardly be dented in indulging his election dream.

Martial law and the unrestrained power it bestowed on the dictator and his heirs doubtless bred the feeling of entitlement galvanizing Marcos Jr. in singing paeans to the dark era that his family is striving mightily to blur in the collective consciousness. His recent “interview” with the entertainer Toni Gonzaga quickly achieved notoriety for his dissembling, including his claim that the dictatorship had the necessary military support at the height of the 1986 civilian-backed revolt, but that his father “chose not to fight” the people. That fabrication crumbles to the dramatic defections of ranking military officers — all on record — in those four critical days, when his father’s order to impose a curfew became laughable in the face of the masses of protesters clogging the now-historic highway.

Even the aging dictator’s physical fitness was subject to the son’s fanciful claims to the clueless Gonzaga. The Palace was mum on his health then, but people remember how the dictator, wearing his “lucky shirt-jac” — another fetish — was obviously enfeebled during the “snap” presidential election campaign, with his aides having to bodily carry him at points in the stump. His sickroom in Malacañang, as described by those who entered it after the family had decamped, was gripping testimony to how ill he was, down to the soiled diapers left behind.

Reacting to the tremendous backlash to his tribute to the man who allegedly brought the Philippines to “the modern world,” Marcos Jr. said those upset with the “interview” needn’t watch it. He said he told no lies. Now 64, he still behaves like the sullen juvenile dressed as a soldier at his father’s “presidential inauguration,” shortly before he and his family, accompanied by a breathtaking cache of cash, jewelry and other valuables, made their panicked flight.

Remember. Marcos Jr. and Gonzaga, along with Enrile, Escudero and their ilk, shouldn’t be allowed their pretensions to “truth” and “neutrality.”