The solemn task of memorializing 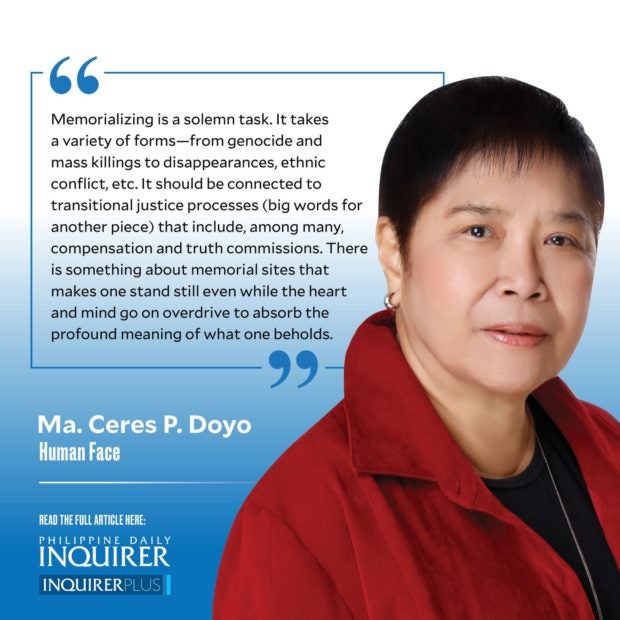 When I was a Jefferson journalism fellow at the East-West Center (EWC) in Honolulu in the 1990s, getting to view the Arizona Memorial in Pearl Harbor even just from a distance was a must for us fellows. That was the site where 1,177 US servicemen aboard the USS Arizona perished when Japanese warplanes bombed Pearl Harbor on Dec. 7, 1941. The bombing signaled the beginning of World War II in the Pacific.

We were flown by a Chinook helicopter from Hickam Air Force Base to a huge aircraft carrier that was waiting for us near the memorial. I was standing beside veteran journalist and kababayan Amando Doronila (EWC’s editorial fellow then) and beholding the memorial when I said almost in a whisper: “My father told me that your parents were killed by Japanese soldiers.”

“Beheaded,” he solemnly replied. “That was a war…”

On Ellis Island in New York where the Statue of Liberty stands is a memorial museum where one can learn history and view artifacts that belonged to immigrants and even retrieve from computers the names of those who had sailed from afar. I have been awed by the likeness of Chief Crazy Horse carved on a mountain in South Dakota and the Vietnam Veterans Memorial in Washington DC. No, I have not been in the Holocaust Memorial in Tel Aviv or in any of the Nazi concentration camps in Europe.

We have several public memorial sites of our own here but most are monuments that stand mute with markers at most that give visitors history in a few paragraphs, like the Memorare in Intramuros, the People Power Monument on Edsa, and the Bonifacio uprising near Manila City Hall. The sculpture of a Filipino comfort woman/sex slave of the Japanese that faced Manila Bay had been removed. Why?

Oh, and even the Japanese had been allowed to erect memorials here for their invaders who died in action. But we have our own Bataan World War II Museum.

One memorial that can hold its own is the Bantayog ng mga Bayani on Quezon Avenue corner Edsa. It has a soaring Castrillo statue of a defiant mother holding a lifeless son, a black granite Wall of Remembrance with the names of some 300 martyrs and heroes who fought during the Marcos dictatorship (1972 and 1986), a museum, and library-archives. The Bantayog Foundation holds exhibits, tours, and lectures. Nearby is the Quezon Memorial Shrine with a museum underneath.

Now rising along University Avenue in the University of the Philippines is the Human Rights Violations Victims’ Memorial Commission. Its construction is in keeping with Republic Act No. 10368 that granted compensation for victims of the Marcos dictatorship (sourced from the Marcoses’ secret Swiss accounts) and the setting up of a commission to oversee the memorial that can rival those abroad. I had written about the search for the best architectural design and I cannot wait to set foot in the memorial. I have a pile to donate to its archives.

This week, the 49th anniversary of Marcos’ declaration of martial law that signaled the suppression of our freedoms and meant suffering for countless Filipinos for 14 years, I read the papers “The Urge to Remember: The Role of Memorials in Social Reconstruction and Transitional Justice” by Judy Barsalou and Victoria Baxter. Also “The Effect of Public Memorials on Social Memory and Urban Identity” by Ebru Erbas Gurler and Basak Ozer.

Barsalou and Baxter write: “Memorialization is a process that satisfies the desire to honor those who suffered or died during conflict and as a means to examine the past and address contemporary issues.”

Gurler and Ozer: “The main aim of public memorials is to ‘remind’ people by connecting them to the past, present and future. Memory sites, which are designed in a way to leak inside our daily lives, increase social information transfer by influencing our daily life styles.”

“Never again, never forget” is the continuing cry of victims of that dark era, belittled by liars and revisionists of history and the tactless who say, “Move on, let it slide, stop whining.” I ask, why do we study Jose Rizal? Should we forget Gabriela Silang or Ninoy Aquino? And the greatest martyr of all, the man named Jesus?

Memorializing is a solemn task. It takes a variety of forms — from genocide and mass killings to disappearances, ethnic conflict, etc. It should be connected to transitional justice processes (big words for another piece) that include, among many, compensation and truth commissions.

There is something about memorial sites that makes one stand still even while the heart and mind go on overdrive to absorb the profound meaning of what one beholds.

All 21 on board scramble to safety after Texas plane crash