The cry of press freedom 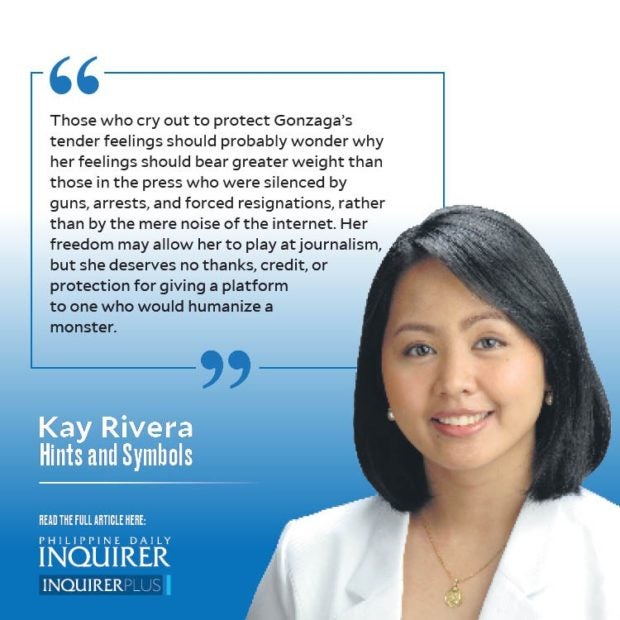 Many have already written about Toni Gonzaga’s interview with Bongbong Marcos, a piece of historical whitewashing in the guise of banal conversation. Prominent figures have come to the defense of Gonzaga’s freedom to interview whoever she wants including, disappointingly, Chiz Escudero and Richard Poon. Jerry Tundag, writing for Cebu’s “The Freeman,” asked how Gonzaga’s critics can, “in all honesty, beat their breasts in the name of freedom while in the same breath deny Gonzaga and Bongbong theirs?” She truly is free to conduct any interview. However, I find it the greatest of ironies that the cry of press freedom should now be used to whitewash the reputation of one of press freedom’s greatest enemies.

Unlike Gonzaga, who likes to pretend at being neutral despite a relationship with Marcos, I will lay down my own cards: My father was a student activist and political detainee of Ferdinand Marcos’ regime. I have written about the matter in “Plenty of proof” (9/7/2020), where I also wrote about the process we followed in applying for claims under the Human Rights Victims’ Claims Board. Clearly, I do have personal stakes in the matter. As a matter of fact, all 11,103 recognized complainants (and more) and their families do. All of them have the right to cry out about the insensitivity and erasure of facts in Gonzaga’s ludicrous interview.

One of the most infuriating things about the Gonzaga ordeal is the way that legitimate criticism is minimized by calling it “bashing.” Bongbong Marcos himself, in a move that would appall Taylor Swift, quoted “haters gonna hate.” What infantile words to invalidate the magnitude of suffering and historical erasure, and reduce all this to a difference in opinion.

If only the despot Ferdinand Marcos also shrugged off such “differences in opinion” among his detractors, and left it at that. Instead, he went after detractors, including the media, with ruthlessness. Ma. Ceres P. Doyo, in a foreword for the compilation “Press Freedom Under Siege” (UP Press, 2019), described the Marcos dictatorship as “years of writing dangerously.” Doyo herself faced a military hearing for her work on a story on the murder of Kalinga leader Macli-ing Dulag in 1980, one of the incidents that crystallized and emphasized the repression of media, as well as the role of journalists in opposing it.

How do we fit into this column the number of abuses against the press and civilians? There’s the takeover and control of privately owned media. The military sequestering of facilities of ABS-CBN. The arrest of journalists and publishers. The strict control of media by Marcos and his propagandists.

How many stories would be enough to convince Gonzaga’s defenders that their cries to protect “freedom” are an insult to those who were forcibly silenced?

Primitivo Mijares wrote the book “The Conjugal Dictatorship” after serving as a Marcos propagandist. Mijares and his son later joined the list of the desaparecidos — the disappeared — with the boy’s corpse later appearing.

Antonio Ma. Nieva, in a 1983 report, listed contemporary cases of “victimized journalists,” whose cases ranged from arrests, to intimidation and harassment, to outright killing: Editors and reporters of the Bulletin Today; the editor and staffers of the outspoken tabloid WE Forum; the Inquirer’s Letty J. Magsanoc, formerly of the Philippine Panorama; journalists of Mr. & Ms. Magazine. And so on. One list among many. Many names now lost to history, with figures like Toni Gonzaga helping in the forgetting.

I invite the reader to fact-check claims made by Bongbong Marcos — “lies that have already been disproven,” he said—with local and international sources. Instead of equating legitimate criticism with “bashing,” perhaps Gonzaga can educate herself and spare a thought for those in the press who did not escape unscathed from Marcos’ father’s regime, since her interview has contributed to continuing attempts to whitewash this part of history. They got a lot more than “bashing” by “haters” for their efforts at exposing bloody truths and protecting the public’s constitutional right to be informed. Those who cry out to protect Gonzaga’s tender feelings should probably wonder why her feelings should bear greater weight than those in the press who were silenced by guns, arrests, and forced resignations, rather than by the mere noise of the internet. Her freedom may allow her to play at journalism, but she deserves no thanks, credit, or protection for giving a platform to one who would humanize a monster.