‘Sorry for the loss of lives’ 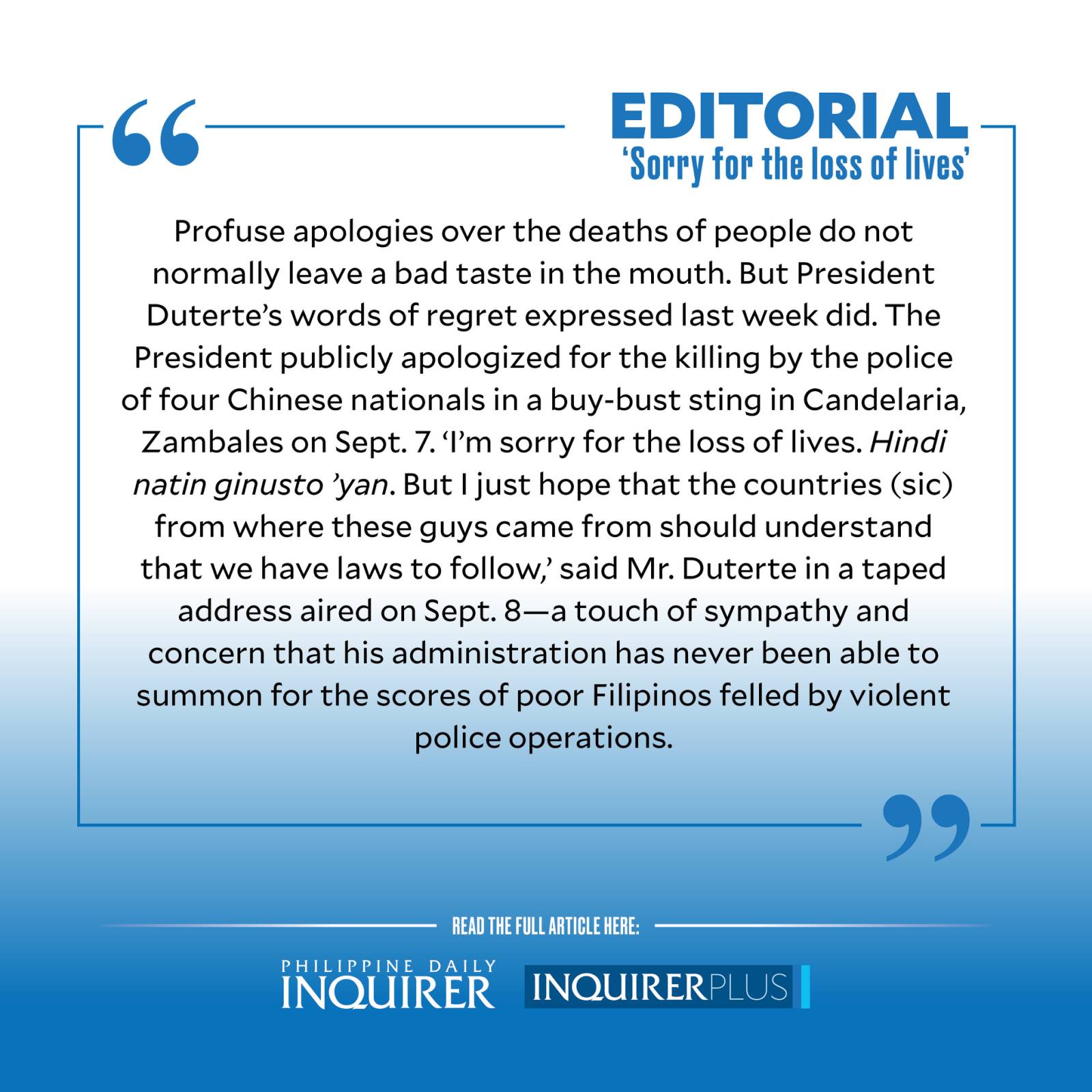 Profuse apologies over the deaths of people do not normally leave a bad taste in the mouth. But President Duterte’s words of regret expressed last week did.

The President publicly apologized for the killing by the police of four Chinese nationals in a buy-bust sting in Candelaria, Zambales on Sept. 7. “I’m sorry for the loss of lives. Hindi natin ginusto ’yan. But I just hope that the countries (sic) from where these guys came from should understand that we have laws to follow,” said Mr. Duterte in a taped address aired on Sept. 8.

Filipinos by the tens of thousands have been killed in Mr. Duterte’s flagship drug war over the last five years; not one of the hapless victims, or their families, has merited an apology from the President over the loss of life at the hands of the police. The even more wrenching deaths of children caught in the crossfire or actually targeted in police operations were dismissed by Mr. Duterte as “collateral damage.” In one particularly callous instance, former police chief and now Sen. Ronald dela Rosa shrugged off the death of a toddler in a police raid in June 2019 with a nonchalant, “Shit happens.”

The Chinese drug suspects who were the subjects of the President’s apology were found to have with them some P3.4 billion worth of crystal meth or shabu—one of the biggest drug hauls this year. Mr. Duterte himself described one of those killed as among “the biggest shabu importers in the Philippines [and] a member of a transnational drug trafficking organization.” But apparently, so careful is the President of offending China that he felt he needed to publicly explain and atone for the deaths of Chinese nationals involved in crimes in the Philippines—a touch of sympathy and concern that his administration has never been able to summon for the scores of poor Filipinos felled by violent police operations.

This project was first proposed by the PNP’s Chinese counterparts in 2020, after which makeshift “China help desks” began appearing in a number of police stations. But the move generated wide public backlash, and the police backtracked.

Now, the PNP says the revived project would likely be implemented “within the year.” But what for? Why allocate police resources already burdened with local peace and order responsibilities and the enforcement of pandemic-related ordinances to extending privileged assistance to a particular group of foreign nationals? How does “mutual law enforcement” work in this case? Will China also create “Philippine help desks” in Beijing and elsewhere and assign a portion of its police force to protecting Filipinos working in that country? And why now, when the millions of Chinese nationals that came to the Philippines with the boom in Pogos are largely gone, driven away by the pandemic and the reduction in Pogo activities?

Speaking of Pogos, Sen. Risa Hontiveros last week called out the state-run Philippine Amusement and Gaming Corp. (Pagcor) for its failure to collect the tax debts of 15 Pogos. Only three of the Chinese companies are still operating, while the licenses of the rest had been canceled, suspended, or placed under review. Per a 2020 Commission on Audit report, Pagcor had a total of P1.382 billion in overdue receivables as of Dec. 31, of which P1.365 billion was owed by Pogos. “Why were debts by Pogos allowed to get this big?” asked the senator.

Even at the height of the pandemic, while Filipinos were forced to hunker down in their homes under strict quarantine, the President allowed the operations of Pogos to continue, citing the need to raise revenues. The massive tax liabilities some of these companies have incurred, however, point to a curious forbearing attitude by the government. The Pogos’ tax problems also dovetail with the raft of other social ills their presence in the country has spawned, from corruption and bribery at the Immigration bureau for fake work visas, to drugs and prostitution, abductions and killings among Chinese nationals, money laundering, and illicit clinics treating Chinese COVID-19 patients.

But for China, only the most delicate of hands, it seems. And so for the deaths of Chinese suspects found to have engaged in that most heinous transgression in the President’s book—drug trafficking—Mr. Duterte has been quick not with condemnation but with a humble apology.