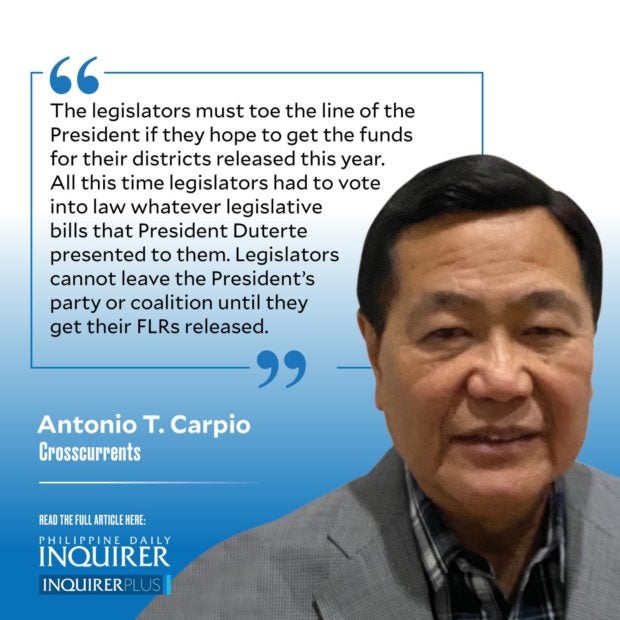 In 2013, the Supreme Court in Belgica v. Executive Secretary struck down the Priority Development Assistance Fund (PDAF) as unconstitutional for two principal reasons. First, legislators were allowed to implement projects that Congress funded under the General Appropriations Act (GAA). Under the Constitution, legislators can only appropriate funds for a specific public purpose; they cannot themselves execute or implement projects they funded as the power to execute or implement projects belongs to the Executive. Second, Congress must appropriate a specific amount for a specific public purpose and cannot leave the determination of the purpose to the Executive as the power to appropriate, which includes the determination of the purpose of the appropriation, is a legislative power.

It turns out that the PDAF has a younger sibling called “For Later Release” or FLR. Under the FLR, the President directs the Department of Budget and Management (DBM) not to release the appropriations in the GAA of a line department unless cleared by the President. The GAA is a law, and the President is duty-bound under the Constitution to faithfully execute or implement the law. If the funds are available, then the appropriations in the GAA must be released to the line department so that the GAA, which is a law, can be implemented. The President has no power to impound or sequester appropriations under the GAA. The President’s power is to veto line items in the GAA, and those he does not veto become law which he must mandatorily implement.

President Duterte has declared FLR about P140 billion in the appropriations for the Department of Public Works and Highways (DPWH) in the 2021 GAA. The DBM cannot release these funds to the DPWH unless cleared by the President. The FLR funds are largely congressional insertions that are inoculated from the constitutional infirmity that the PDAF suffered, because legislators now have no official participation in the implementation of the projects funded by these insertions. The appropriations are also not lump sums since they are for specific public purposes. These congressional insertions are for projects in the districts of legislators who are now at the mercy of the President, who may or may not release these congressional insertions.

If the legislators go against the President now before the release of their FLRs, they will be in for a tough fight. In the last quarter of 2021, the President can declare as savings the funds corresponding to the FLRs of legislators who have abandoned him. The President can then realign the savings into the funds of the National Task Force to End Local Communist Armed Conflict (NTF-Elcac). The NTF-Elcac distributes P22 million for every barangay “cleared” of communist insurgency. The candidates supporting the President’s party or coalition can recommend what barangays will be given P22 million each, and this will obliterate their political opponents.