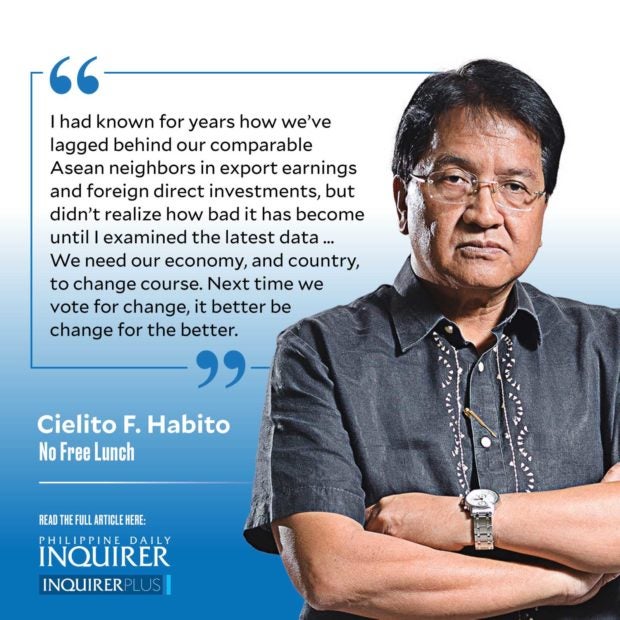 I had known for years how we’ve lagged behind our comparable Asean neighbors in export earnings and foreign direct investments, but didn’t realize how bad it has become until I examined the latest data.

Consider these numbers taken from the Asian Development Bank database: Our average annual merchandise exports over the last four years (2017-2020) were valued at $69 billion. Indonesia, with the next higher export level, averaged two and a half times ours, at $170 billion. The others earned from three to nearly six times ours: Malaysia got $234 billion, Thailand $242 billion, Vietnam $251 billion, and Singapore $387 billion.

We are not only lagging behind our Asean peers, but we have also progressively fallen further and further behind through the years. Meanwhile, Vietnam overtook everyone else in the group one by one over the past decade, except for Singapore, to which it is now second, but closing in.

The story is much the same for foreign direct investments (FDI). Cross-country data from Santandertrade.com show that in 2020, the Philippines had a total FDI stock of $103 billion, against Malaysia’s $174 billion, Vietnam’s $177 billion, Indonesia’s $240 billion, Thailand’s $272 billion, and Singapore’s $1.9 trillion.

In fact, Bangko Sentral ng Pilipinas data show that annual FDI inflows into the Philippines progressively moved downhill since 2017, when we peaked at $10.3 billion; last year, we only managed $6.5 billion. Meanwhile, the others saw increases within that period, and Vietnam actually saw FDI inflows jump last year, even in the face of the pandemic crisis.

Some observers have taken comfort in our having a much larger inflow from overseas workers’ remittances, on which our Asean neighbors are nowhere near us. But that’s no consolation when one considers that the $29 billion or so in remittances that we get every year is dwarfed by the $101 billion export gap between us and next higher-up Indonesia alone. Based on exports and FDI alone, the disheartening fact is that it’s no exaggeration when it is said that we are back to being the so-called “sick man of Asia”—and we haven’t even begun to talk about literal sickness, as in COVID-19. Sigh.

As street folk would say, Anyare?! What happened? Surely there are several factors that have combined to bring our real economy to this sorry state over the years. Let’s take a stab at a couple of them. First, our pathetic export performance mirrors our laggard showing in attracting FDI. A big chunk, if not the bulk of our neighbors’ exports, come from international firms, after all. But if we cannot even attract a comparable amount of foreign investors to export from within our shores, then we will keep falling behind not only in exports, but in job creation, output growth, and overall incomes as well. We thus need to ask what keeps those investors—and not only foreign but moneyed Filipino investors, too—from putting their stakes in the Philippine economy.

It would take more than one article to expound on this alone, but few would disagree that one factor looms large, and that is the bad state of governance in our country. When dealing with government from the top leadership down to local governments is — to put it kindly — fraught with risk and uncertainty, a potential foreign investor would simply move on and look elsewhere in the neighborhood.

Our overall export performance also mirrors our pathetic performance in agriculture. I’ve already written before of how our agricultural export performance is an outlier among its Asean peers. Against our own annual agricultural exports of $6 billion, Thailand earns more than $50 billion, Malaysia about $40 billion, Indonesia $36 billion, and Vietnam $15 billion. And as is often lamented, we mentored most of them in the agriculture sciences in the 1960s to 1980s in UP Los Baños and our other state universities and colleges. I need not write again of why our inward-looking approach to agriculture and the policy environment it translated to kept Philippine agriculture stunted relative to our peers.

We need our economy, and country, to change course. Next time we vote for change, it better be change for the better.