Businesses on the brink

Nearly a year and a half since the pandemic began in March 2020, the Philippines continues to have more virus infections than before, the economy remains constricted by on-and-off lockdowns, tens of thousands of business establishments have closed down, millions of displaced workers are jobless, and the end is nowhere in sight.

The government looks unsure on how to contain the crisis, given its frequent flip-flopping on policies and directives. Such indecisiveness and disorder have only had a devastating effect on the business sector. Never mind the country’s billionaires: As Forbes has reported, the richest Filipino tycoons and families even managed to grow their net worth at the height of the pandemic. The most debilitating impact has been on small and medium businesses, which comprise 90 percent of the sector.

Take the food service industry: The extended lockdowns have pushed thousands of restaurants and establishments to the edge of closure. “Many restaurants that struggled but survived the first two lockdowns recently shuttered because of this third ECQ (which bars indoor and al fresco dining). Many more will follow,” said Elbert Cuenca, owner of a number of food places in the metro. Cuenca has been one of the more vocal owners, branding the sudden shifts in quarantine rules as “senseless and arbitrary.”

The announcement last week by Automatic Centre that it would stop selling appliances and home furnishings underscores just how ruinous the situation has become even for established businesses. Automatic Centre has been an institution in the appliance retail business for the last 70 years, but like so many other companies reeling financially from the endless quarantines, it has been forced to bow out for good, joining an ever-growing list of familiar establishments decimated by this crisis.

In May last year, Marco Polo Davao announced the indefinite stoppage of its hotel operations effective June 15. Sun Cruises, the ferry service provider to Corregidor island, also shut down in May. The following month, the 10-year-old Oasis Park Hotel in Paco, Manila, said it would no longer resume operations after temporarily closing its doors in March. 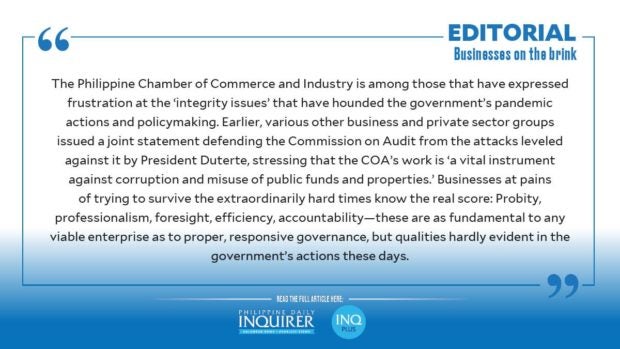 And yet, one of the most disturbing revelations of late has been how the government, in the face of the widespread malaise affecting local businesses, still managed to favor a foreign importer of face masks and shields and protective personal equipment for health frontliners at the expense of local manufacturers. Local electronics manufacturer EMS Components Assembly, which was convinced by the Department of Trade and Industry to retool part of its assembly line to produce medical supplies, got a contract on April 27 last year to deliver 100 million face masks at P13.50 each.

According to EMS chief executive Perry Ferrer, they were able to deliver 25 percent or 25.8 million pieces of face masks at the agreed-upon price. However, the delivery of the rest was delayed because the government claimed it had a high inventory and didn’t have enough storage space in its warehouses. EMS was later forced to lower its price to P2.35 from P13.50 to be able to deliver the remaining 74.1 million face masks.

“It is P1.3 billion [for the] total original contract but at the end, after shipping 100 million units, the total sales was only P523 million. It was far from the P1.3 billion. Nalugi kami,” Ferrer lamented before a Senate inquiry looking into the use of government funds for the pandemic.

In contrast to the shabby treatment accorded EMS, Pharmally Pharmaceutical Corp., whose ownership has been linked to people with close ties to Malacañang and some of whose executives are reportedly wanted by law enforcers in Taiwan for alleged stock manipulation, bagged three separate contracts to supply some 12.9 million units of face masks with prices ranging from P22.50 to P27.72 each.

In total, Pharmally — an undercapitalized, previously unknown entity — snagged more than P8.6 billion in government deals to supply pandemic response goods in 2020. The Philippine Chamber of Commerce and Industry is among those that have expressed frustration at the “integrity issues” that have hounded the government’s pandemic actions and policymaking.

Earlier, various other business and private sector groups issued a joint statement defending the Commission on Audit (COA) from the attacks leveled against it by President Duterte, stressing that the COA’s work is “a vital instrument against corruption and misuse of public funds and properties.” Businesses at pains of trying to survive the extraordinarily hard times know the real score: Probity, professionalism, foresight, efficiency, accountability—these are as fundamental to any viable enterprise as to proper, responsive governance, but qualities hardly evident in the government’s actions these days.