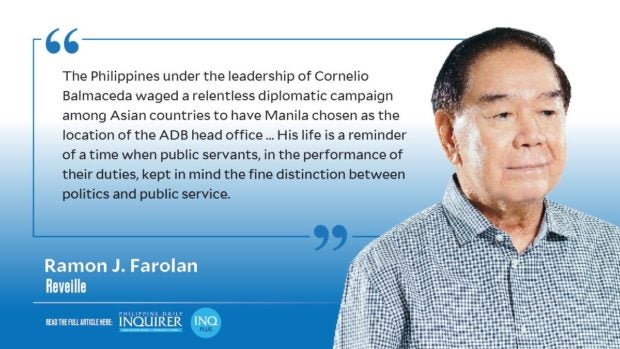 Skydiving as a sport is supposed to be for the young and daring, certainly not for octogenarians. Augusto “Gus” Lucero of the UP ROTC Vanguard Society, believes otherwise. To mark his 85th birthday, Gus made his first skydive jump at a resort in Oceanside, California, and landed safely with no broken bones. Congratulations!

Not many Filipinos are aware that one of the most important international financing institutions in the world is located in our country. The Asian Development Bank (ADB) is a multilateral development bank providing financing to developing countries on generous and flexible terms. Over the last decade, ADB has provided the Philippines close to $20 billion for various development projects. The Bank is located at the Ortigas Center in the City of Mandaluyong, Metro Manila.

One may ask, how did this happen? Japan was a key player in the establishment of the Bank and is also one of its biggest contributors. The most logical location for the new institution was Tokyo. Fortunately for the Philippines, Cornelio Balmaceda, who was secretary of commerce and industry at that time, had other ideas.

In an article prior to the vote on the site of ADB headquarters, Balmaceda explained why he believed that it should be in Manila: “The primary objective of the Bank is to help accelerate the economic development of the developing countries in Asia. To accomplish this, the Bank must not only know the hardships, problems and dreams of these countries, but must also look at these hardships, problems and dreams through the eyes of these countries. The Bank must therefore be located in a developing country.”

The Philippines under the leadership of Balmaceda waged a relentless diplomatic campaign among Asian countries to have Manila chosen as the location of the ADB head office. At that time, I was posted at the South East Asia Treaty Organization headquarters in Bangkok and personally witnessed the tremendous efforts he made crisscrossing the region in a bid to gain the support of Asian countries. In December 1965, on the third and final balloting, Manila won by one vote over Tokyo as the permanent site of the ADB. It was one of the country’s shining moments on the world stage. President Diosdado Macapagal in a hand-written note to Balmaceda, paid tribute to his Cabinet member: “Your crowning achievement was the establishment of the Asian Development Bank in the Philippines. Posterity will remember you as one of the great administrators of government and as one of our greatest citizens.”

Cornelio Balmaceda was the only surviving child of Crispina Agor and Santos Balmaceda, hardworking and industrious farmers from Sarrat, Ilocos Norte. With a gifted mind, he finished secondary education at the Manila High School and went on to the University of the Philippines where he graduated with an AB degree. In 1920, he became one of the first Filipino “pensionados” to be sent to Harvard University, finishing with an MBA majoring in foreign trade. He would return to Harvard many years later as Philippine secretary of commerce and industry, and be honored as guest speaker at a national conference under the auspices of the Harvard Business School Association.

In September 1948, President Elpidio Quirino appointed Balmaceda secretary of commerce and industry. Some 14 years later, President Diosdado Macapagal would also appoint him to the same office. Amando Doronila, a former columnist of this paper, described Balmaceda as “a top-grade Cabinet minister of the old school of civil servants. He rose up the ranks of the bureaucracy. He had an impeccable integrity and was respected. He was never self-promoting but he was accessible to the media.”

In her book “Cornelio Balmaceda — A Legacy of Honor and Integrity,” Gloria B. Gozum writes of her father: “The father, whom I saw as a man who never forgot his beginnings and as one who treasured his parents and his family, has been overshadowed by the man of stature that he has become. He was a brilliant man but a humble one, who preferred to keep his pride and joy in his achievements to himself.” On Wednesday, Sept. 15, the family marks his 125th birth anniversary. His life is a reminder of a time when public servants, in the performance of their duties, kept in mind the fine distinction between politics and public service.