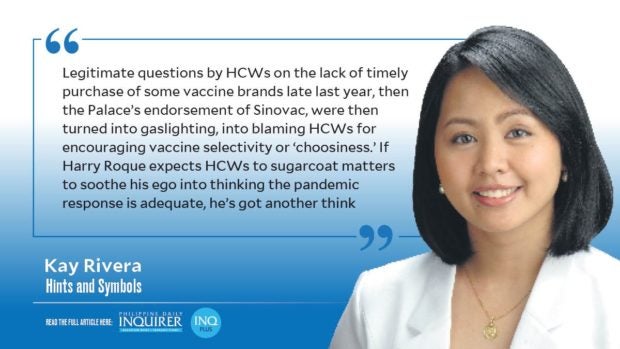 We all saw it. The way Harry Roque, serving as the official mouthpiece of the President, berated health workers in a video clip from a pandemic task force meeting. Roque’s reaction to his physician consultants’ statements was clearly self-righteous, arrogant and poorly considered, and the doctors in question were rightly shocked and insulted. However, truly, few physicians hold enough respect for Roque for his opinion to matter. More upsetting is the evidence of Roque outright rejecting input from an important sector that the IATF is supposed to be consulting. It’s upsetting, too, that our response is reduced, in its barest bones, to a question of lockdown-or-no-lockdown. Reduced, by Roque, to a false dichotomy of listening to HCW assessments versus listening to the poor and hungry.

The things that we are personally grateful for, as health workers, in terms of support during this pandemic consist of the bare minimum (or less) from the government. The bare minimum, too, is undermined by things we find it difficult to see past.

For example: I am grateful that, in the Philippines, establishments may rightfully prohibit entry to individuals who are not wearing the appropriate masks, and this prohibition is socially acceptable. This is in contrast to other nations where pockets of anti-mask communities are able to flout such regulations with more ease. This gratitude, however, is undermined by the way we have seen those in office crackdown on some of this reckless behavior… but not all. To flout government restrictions on mask-wearing and mass gatherings is punishable by law. See examples of protesters being captured by police, and tricycle drivers being fined for not wearing masks. And yet the same does not seem to apply to the mañanita holders, to the influencers who held maskless gatherings but who were never arrested or fined.

As a citizen, I was also grateful for the financial assistance handed to the neediest during the first and hardest days of lockdown. However, this, too, is undermined by the fact that the assistance given was given all too briefly. After a couple of months, we were given the presidential equivalent of a shrug and basically told that Filipinos, who are suffering record levels of unemployment, must fend for themselves. If there were truly no money—if we truly believed the Philippines to be a poor nation, gasping for resources across all social strata—this might be easier to live with. But as we are forced to live with only suppositions about where so much of our COVID-19 funds went, and as more and more scandals on corruption and possible misuse of funds come to light, gratitude is hard to come by.

We are grateful for the fact that most of our HCWs are now vaccinated. We are also grateful that in general, the government on all its levels does seem to encourage speedy vaccination. This gratitude is similarly undermined by serious issues with vaccine selection and then rollout. Legitimate questions by HCWs on the lack of timely purchase of some vaccine brands late last year, then the Palace’s endorsement of Sinovac, were then turned into gaslighting, into blaming HCWs for encouraging vaccine selectivity or “choosiness.” Illogical prioritizations (contrary to WHO recommendations) also took place with no consequences, whereas health officials in other nations have resigned over such scandals.

We are grateful that physicians are still given a voice in the pandemic response. However, when so much scientific input is rejected or disregarded, the voice seems vanishingly small in value. Examples: the continuing use and blanket requirement of face shields for all; the previous call against reducing the required distance between passengers in public transport; the President’s recent words about ivermectin.

We are grateful for other things. We are grateful for private institutions and nongovernment organizations stepping up and assisting in the purchase of vaccines and PPE, in making testing accessible. We are grateful for public support and for non-HCWs who help encourage the lay to vaccinate, to isolate, to follow protocols. These are efforts from outside of administration. If Roque expects HCWs to sugarcoat matters to soothe his ego into thinking the pandemic response is adequate, he’s got another think coming.