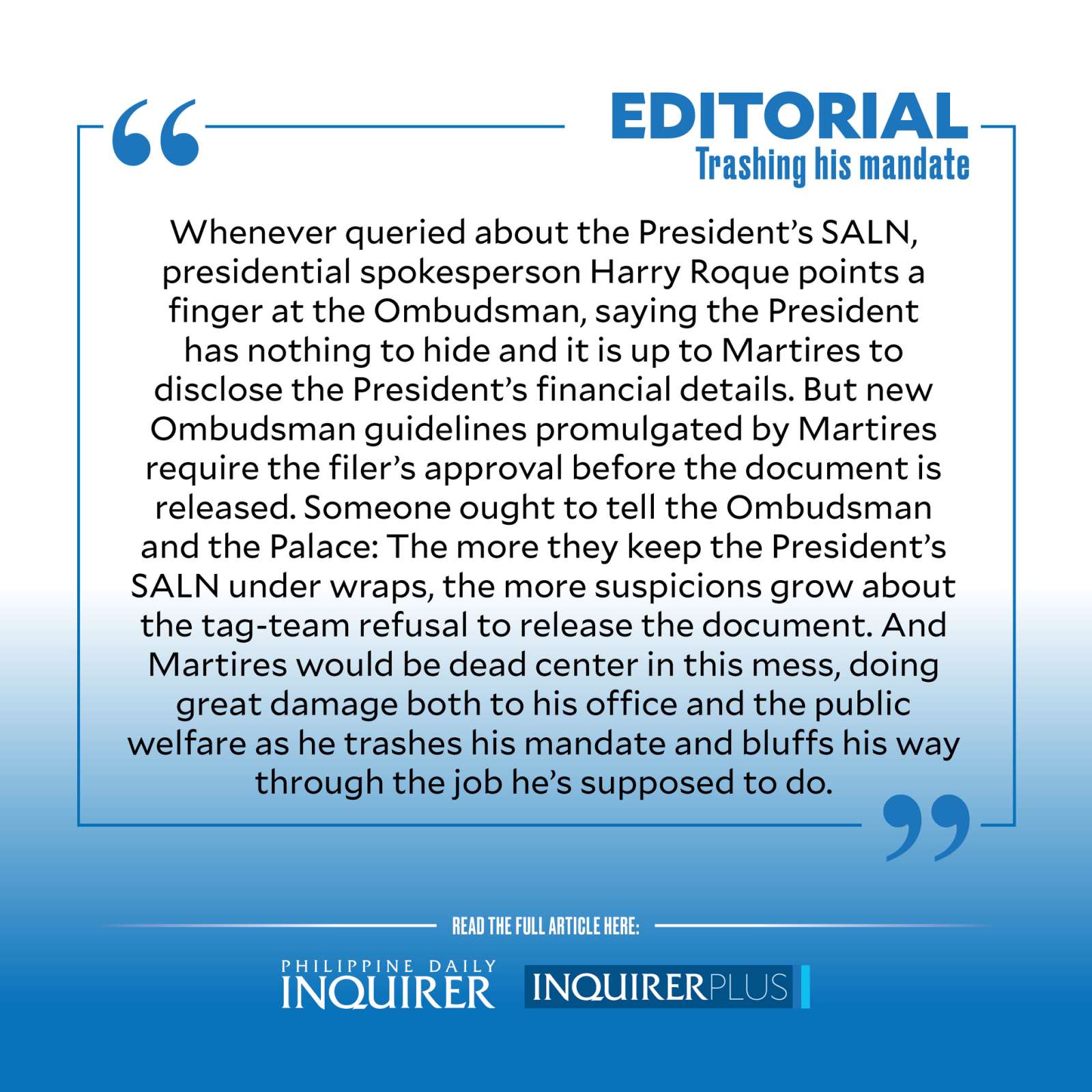 One wonders what office Ombudsman Samuel Martires was thinking of when he accepted his post after his retirement from the Supreme Court.

The Office of the Ombudsman is an independent Constitutional body whose avowed mission, per its official website, is to “transform public accountability into the norm and recognized as the central corruption prevention arm of the government.” Among its powers is to “investigate and prosecute on its own or on complaint by any person, any act or omission of any public officer or employee, office or agency, when such act or omission appears to be illegal, unjust, improper or inefficient.”

More from the Ombudsman’s website: “The framers of the 1987 Constitution envisioned the Ombudsman as an official critic who studies the laws, procedures and practices in government, a mobilizer who ensures that the steady flow of services is accorded the citizens, and a watchdog who looks at the general and specific performance of all government officials and employees… The clear intent is to give full and unimpeded play to the exercise by said Office of its extraordinary range of oversight and investigative authority over the actions of all public officials and employees, offices and agencies.”

All this is why it is crucial that the Ombudsman remain independent, fearless, and impartial—characteristics that, alas, can hardly be said of the conduct of Ombudsman Samuel Martires.

Martires has turned out to be the greatest champion of President Duterte’s penchant to be opaque about his SALN or statement of assets, liabilities, and net worth. Even before he took office, Mr. Duterte was already in a tangle over his SALN, with former senator Antonio Trillanes IV claiming that the then presidential candidate failed to declare some P211 million in his SALN, which had been deposited in a private bank account. In 2017, then Ombudsman Conchita Carpio Morales authorized the release of Mr. Duterte’s SALN. Since then, the required annual document from the President has not seen the light of day or of public scrutiny.

Whenever queried about the President’s SALN, presidential spokesperson Harry Roque points a finger at the Ombudsman, saying the President has nothing to hide and it is up to Martires to disclose the President’s financial details. But new Ombudsman guidelines promulgated by Martires require the filer’s approval before the document is released. Mr. Duterte can very well authorize—but he has not. Public or media inquiries have, instead, been subjected to the runaround engendered by the remarkable alignment of mindsets between Malacañang and Martires.

But why fear the release of one’s SALN if one isn’t hiding anything in it or fudging the facts? A proper SALN should be able to withstand even the closest scrutiny.

Martires insists there is danger in making SALNs publicly available, noting how these have been “weaponized” against potential candidates by their opponents. Not content with refusing to release the SALN of Mr. Duterte and other officials, this supposed vanguard against corruption and dishonesty in government is now moving to punish citizens who would dare utter a word about officials’ SALNs. He has called on legislators to impose “stringent penalties” on anyone who “comments” on the public documents—a stiff sentence of at least five years. When asked by Bayan Muna Rep. Carlos Zarate if such a move might be “dangerous,” Martires invoked his personal grievance at allegedly being subject to questions about his own SALN, and maintained that he will not yield to public demands to release the documents.

Martires, indeed, should know about SALNs being weaponized. Remember when the Duterte administration, through sympathetic justices in the Supreme Court—which, by the way, then included Martires—deployed the SALN issue to get rid of former chief justice Ma. Lourdes Sereno? Solicitor General Jose Calida also tried using the same tactic against Associate Justice Marvic Leonen, though his efforts were thwarted.

“It’s quite perplexing that the first action of the Ombudsman who’s supposed to be the tanod bayan of the people against corruption is to actually prevent the people from accessing this crucial information as guaranteed by no less than the Constitution,” remarked Dino de Leon, one of the three lawyers whose recent petition to have the Duterte SALN released was rebuffed by Martires. “So we have to ask ourselves, what is the Ombudsman doing? Is he still fulfilling his mandate?”

Someone ought to tell the Ombudsman and the Palace: The more they keep the President’s SALN under wraps, the more suspicions grow about their tag-team refusal to release the document.

And Martires would be dead center in this mess, doing great damage both to his office and the public welfare as he trashes his mandate and bluffs his way through the job he’s supposed to do.