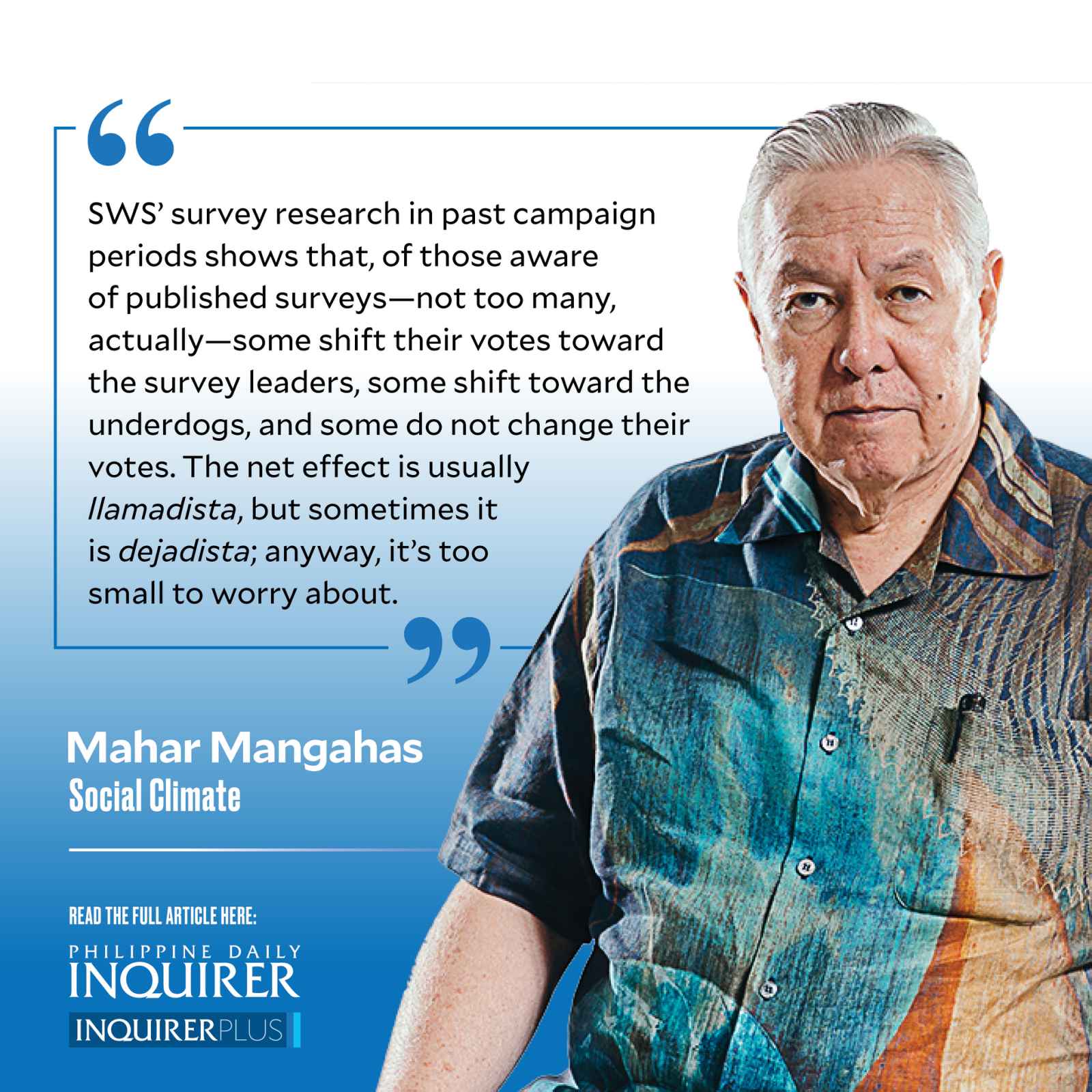 Preelection surveys about voters’ preferences among candidates for an elective office are common sense tools for any serious aspirant for that office. An election is necessarily a contest. Only when the aspirant is unopposed is there no need for a survey; indeed, there is no need for the election.

By surveys, I mean quantitative scientific research about the electorate. Fake news and gossip should be sifted away and discarded. The survey report should include the identity of the survey doer, coverage of respondents, mode of sampling (must be random), sample size, and fieldwork period.

Surveys—plural, because only multiple surveys can show how the campaign affects an aspirant’s standing over time—provide essential information to the contenders. A useful mnemonic for the information is SWOT: the strengths, weaknesses, opportunities, and threats that apply to the aspirant, as well as to all of the aspirant’s rivals. It is foolish for an aspirant to lose because rivals know more about SWOT. One must assume that every contender uses surveys, and thus knows each other’s SWOT.

The first element of SWOT is name recognition. Competent surveys use exactly what appears in the official ballot. With his baptismal name “Jose Bautista,” the movie star Ramon Revilla Sr. would have lost his 1992 bid for senator, according to surveys early in the campaign. SWOT is available for any of the aspirants to know, by asking the right questions.

The second element is the choice among field(s) of candidates. If A is contending against B and C for a certain post, the survey will have to ask for the preference within (A, B), (A, C), and (A, B, C); that’s three questions. Suppose there’s a fourth, or a fifth, contender? The bigger the field, the longer the questionnaire. The fields will change over time, as aspirants decide whether to run or not; the surveys should try to anticipate the changes. They should remember to ask for the respondent’s next choice, in case the first choice drops out.

Voter surveys are not rocket science; many companies do them for confidential clients. There is a Marketing and Opinion Research Society of the Philippines (MORES), affiliated with the European Society for Opinion and Marketing Research (ESOMAR). There is an Association of Market Research Operations Specialists (AMOS) for companies that offer field interviewing and/or data processing. MORES/AMOS have “Field Protocols in the Period of Health Crisis” (3/13/2020) approved by the Department of Health.

Market research companies that work for national brands have developed practical, tried and true, methods for obtaining statistically representative samples in the field. They get repeat business because these methods work. SWS has learned from them.

It’s not improper for a researcher to be politically affiliated, as long as the research done is unbiased. The US has Republican pollsters and Democratic pollsters who work exclusively for their own parties, to protect against leaks—beware of survey espionage! There are also independent/academic pollsters who work for the media, government, and themselves.

Whatever the affiliation, all must subscribe to the opinion research industry’s code of professional ethics, which lists the rights of sponsors, respondents, and researchers. Researchers have the right—indeed, the duty—to reject any suggestion that may lead to scientifically unwarranted reporting. Think of the medical diagnostics industry, which produces confidential information, while following ethical principles to protect the interests of patients, physicians, and the diagnosticians themselves.

Political aspirants should not worry about the so-called bandwagon effect of surveys made public. They should distinguish between research and propaganda. Surveys will affect mainly the close-in supporters, rather than voters in general. They probably make the survey leaders financially stronger, which is probably the real point. Anyway, isn’t that how a democracy works, in choosing its leaders according to popularity?

SWS’ survey research in past campaign periods shows that, of those aware of published surveys—not too many, actually—some shift their votes toward the survey leaders, some shift toward the underdogs, and some do not change their votes. The net effect is usually llamadista, but sometimes it is dejadista; anyway, it’s too small to worry about.