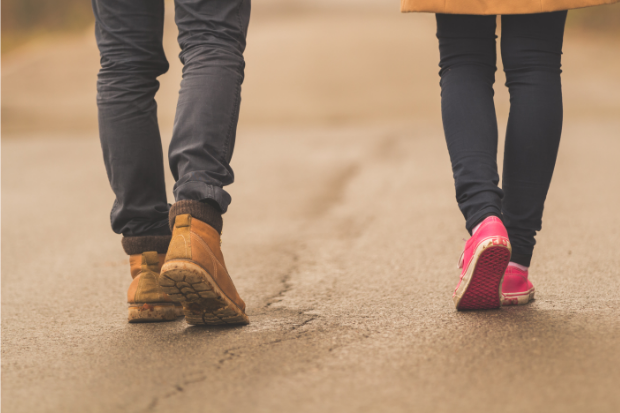 Euri and I work the night shift, and after we clock out at 6 a.m., we go out for a walk. We’ve been doing this for more than a month now, and I can safely say it has become part of our routine. After living together for over half a year, we finally have a walking schedule that we can, most of the time, keep. We’ve tried walking in the afternoon, but mornings are easier; we’ve tried not walking, and that was very difficult. We work from home, so we’re indoors for long stretches of time. Our home may be a special and magical place, but after a long day, it’s refreshing to breathe some fresh air and look at spaces wider than our apartment’s four walls.

And there’s Daisy, too, our 3-year-old dachshund. Like us, he – yes, he’s a he, but named Daisy because Euri was doing a Tereza from “The Unbearable Lightness of Being” – needs exercise. When either Euri and I don’t feel like going outside, Daisy is the reason why we end up walking. How can we refuse, knowing he loves to run and chase God knows what around the park? He wags his tail and reaches for us excitedly whenever we’re changing clothes — he knows when it’s time to go out, which clothes we wear when we walk.

Our route varies, but usually, from our apartment, we walk to a nearby memorial park. It has wide and carless roads, and it’s shaded by trees all over. Sometimes, we just walk around that park — it is vast enough and has various paths and turns. More often, we head out of the park and cross the road to a neighboring subdivision. Walking in the subdivision is not as simple because cars occasionally pass by and a gang of dogs roams around its streets. Daisy, whenever he sees the gang, innocently pulls and tries to go near the dogs. But I know better and end up carrying him.

Euri and I hold hands whenever we walk. I once told her I only want to hold her hands during mornings, that’s why I ask her to go out on prolonged walks. It’s a joke, but one that’s partly true. Walking, for me, has always been therapeutic, but it became cherished when I started having Euri beside me, our hands holding each other. Sometimes, she holds my arm, but I reflexively raise it, like a waiter holding a cloth. Euri tells me to just set it down and relax and let her hold my arm. I’m learning.

From the subdivision, we head to a commercial park. I like walking in that area because there are no stray dogs and its walkways are shaded. We stroll around unopened restaurants and starting-to-open shops and towering BPO buildings. Sometimes, we go further, pass by the mall, and head to the cathedral. Euri told me the cathedral was over a hundred years old but has been perennially under renovation ever since a recent earthquake. Near the cathedral, there’s a newspaper stand, and the storekeeper pulls out our paper once she sees us. There’s also a bakery across the road, where we buy three-days-worth of Spanish and cheese breads. We head back to the commercial park through another route, and sometimes we stop at the florist so I can buy Euri a flower.

We’re quite a sight, I think — remarkable to people we regularly pass by, head-turning to everyone else. I’m the least conspicuous, but still noticeable, towering at six-foot-tall, with shoulder-length hair and John Lennon-esque sunglasses. And there’s our Daisy, who immediately attracts attention, because, well, he’s a “hotdog” — he’s three-foot-long but barely a foot tall, with shiny black fur, wagging his tail as he struts about in front of us. But most striking is the beautiful, alluring woman holding my hand, with her bottle-blonde hair and radiant personality.

There are two kinds of places in the world: the place with Euri and those without her — that’s how I could best describe the aura of Euri’s presence. I’ve become used to people giving us long stares, intrigued strangers who can’t help but watch the three of us walk. The interest is not one way, though — we have “Daisy Thoughts.” In a higher-toned voice, with a simpler vocabulary and complicated illogic, we pretend to be Daisy and have silly observations about the things and people we pass by.

It’s already a good morning if we have walked, but it’s better if we have taho. There are various vendors around the park, but we have a favorite. Ateng Taho either stays at the government offices or at the quadrangle. We like her taho because the tofu is always fresh, the arnibal is sweet but not overpowering, and the sago is generously served. We eat our taho on a table, in a closed-down-by-COVID restaurant. I enjoy looking at Euri’s elated face as she sips her taho. We leave some for Daisy, who is himself adorable when he’s slurping taho.

Euri’s Fitbit is our guide — during workdays, we walk 7,000 to 8,000 steps, and during weekends we walk for at least 10,000 steps. We have, like everyone else, bad days, when we barely make 6,000 steps. Or when instead of exchanging silly jokes and observations, we exchange silences. Well, who doesn’t? We’ll walk again the next morning, and it’ll be better.

We’re home by 8 a.m. Euri and I rest for a bit, before taking a shower. Daisy, meanwhile, exhaustedly lies down on the floor, his short arms and legs stretched out, not moving until I give him his meal. After all that, the three of us head up to our room and try our best to sleep. The rest of our schedule, of course, is a work in progress. There’s work and so many other things once we wake up, but what I look forward to the most is our morning walk the next day.

That’s why I love walking. It is simple and requires the littlest of efforts, yet it can be as fun as our imagination make it out to be, with the variations and infinite impressions. It can be intimate, too, because when I walk with Euri, I know the buildings and streets and people we pass by may change, but I’ll always have her, my lover, by my side.

Mark Flores, 27, is a writer, and he shares a home in Angeles City with his grammatically-superior partner, Euri, and their wiener dog, Daisy.

A tale of two teachers

On my cousin France, a Filipino hoping to help out in Canada