How warped are the priorities of the Duterte administration as reflected in its proposed P5.024 trillion national budget for 2022?

On the very week that exhausted health care workers were taking the unprecedented step of marching in the streets to demand that the government pay them their long-overdue benefits, the budget hearing at the House of Representatives heard a most extraordinary disclosure: The Department of Health’s (DOH) proposed P242.2 billion budget for next year does not provide for the special risk allowance (SRA) of health care workers.

Marikina Rep. Stella Quimbo, an economist, was quick to notice something amiss: The P19.6 billion allocation for COVID-19 response of the DOH seemed insufficient for the pandemic needs of the public and private sectors.

FEATURED STORIES
OPINION
Marcos Jr.’s fictions
OPINION
Why stop the hearings?
OPINION
For whom do you fight, Manny?

It was only then that Health Secretary Francisco Duque III confirmed that the Department of Budget and Management (DBM) had cut some P50.4 billion from the DOH budget for next year. That allocation was for the SRA, hazard pay, and meal, transportation, and accommodation allowances for health care workers. “You’re correct. For next year there is none (for SRA),” said Duque. 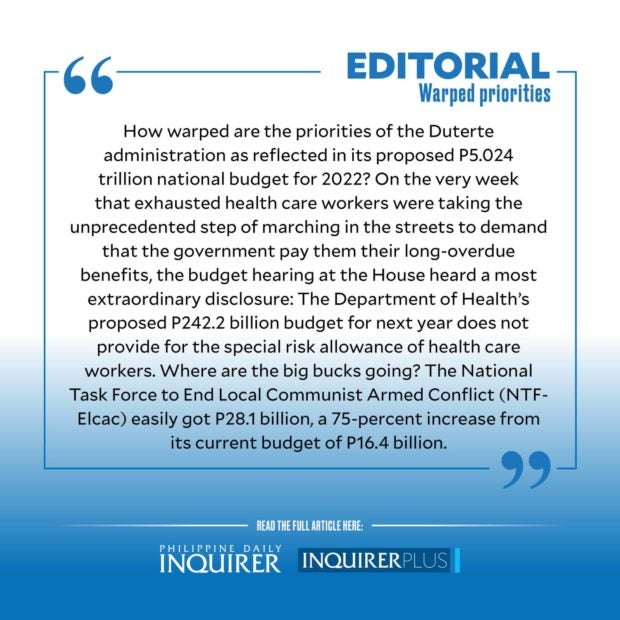 The call for the timely provision of the SRA, already measly as it is, has been repeatedly made throughout the past 18 months as frontliners heroically battled the COVID-19 pandemic. Duque has been made to explain many times, in various fora, why the government is excruciatingly slow, almost grudging, in fulfilling this fundamental obligation to the heroes of this health crisis. And yet, were it not for Quimbo’s probing, the health secretary would have nonchalantly left it unmentioned that this unacceptable state of affairs would still be in place next year. Did Duque even lobby with the DBM, in the name of his embattled workforce, to restore the cut? Did he cry out to his principal, President Duterte, who has staunchly backed him all this time through all the blunders and missteps of the DOH, to order the budget office to find the money that was owed the health workers? Or, in preferring to remain quiet until a lawmaker called him out, was he thinking that the glaring omission would go unnoticed, that the injustice would vanish somehow? Was he thinking at all?

Bafflingly, infuriatingly, the health sector—tasked to confront the gravest threat to public health in the nation’s history—got the short end of the stick on many other fronts. There was no allocation made, for instance, for the establishment of more COVID-19 testing labs. The DOH also proposed P104 billion for vaccines, but the DBM slashed this to P45 billion and put it under unprogrammed funds that could be used only if there was a surplus in revenues.

Unkindest cuts were made in the budgets of the Research Institute for Tropical Medicine (RITM), the country’s main facility for infectious diseases, and the University of the Philippines which funds the Philippine General Hospital, the major COVID-19

referral hospital, and the Philippine Genome Center in charge of determining the COVID-19 variants causing the surge of cases in the country. UP’s proposed P36.5 billion budget was slashed to P20.1 billion.

Meanwhile, where are the big bucks going? The controversial National Task Force to End Local Communist Armed Conflict (NTF-Elcac) easily got P28.1 billion, a 75-percent increase from its current budget of P16.4 billion.

Sen. Nancy Binay was among those incredulous at the P11 billion bonanza for the NTF-Elcac, while P170 million was slashed from the RITM’s proposed P393 million budget. “What’s happening? Our enemy is COVID. Is Elcac more important than the RITM? It does not make sense. Government seems to be removed from the realities on the ground,’’ lamented Binay.

Per the calculations of Gabriela Women’s Party Rep. Arlene Brosas, the NTF-Elcac budget can fund the free RT-PCR tests of 8 million Filipinos and 120,000 COVID-19 tests per day for two months. Other lawmakers said the money could be added to the P240 billion earmarked for the pandemic response or increase the P21 billion allotted for assistance to displaced workers.

Even the budget of the Commission on Elections for additional benefits for teachers who will risk their lives during the elections next year, and for other COVID-19 measures to ensure safe polls, have been cut.

In contrast to the scrimping that was applied to the budget proposals of many critical agencies, the Office of the President was granted a whopping P8.182 billion budget, half of which was earmarked as intelligence and confidential funds that are beyond public scrutiny. Last Friday, in the midst of the national health and economic calamity that shows no signs of easing, when every peso of taxpayer money should be made to count, the House appropriations committee virtually achieved a record with its lightning-fast approval of the lavish presidential funds—all in three minutes flat.

COVID spread in Metro, 4 other areas slows down

Don’t throw away your face shields just yet