In just several days of hearings at the Senate, staggering revelations have tumbled out relating to the dubious purchase of P8.7 billion worth of overpriced face masks, personal protective equipment (PPE), and COVID-19 test kits that senators have said may be tantamount to “premeditated plunder.”

At the center of the grilling by the Senate blue ribbon committee is Lloyd Christopher Lao, a provincemate from Davao and fraternity brother of President Duterte, who at one point was designated undersecretary in the Presidential Management Staff under now Sen. Bong Go. (Both Lao and Go have denied this link, but documents prove otherwise.)

It was Lao who approved the outsized supply contracts with Pharmally Pharmaceutical Corp. as executive director of the Procurement Service of the Department of Budget and Management (PS-DBM). Lao was appointed head of PS-DBM on Jan. 2, 2020 before “quietly” leaving in June that year; as Senate Minority Leader Franklin Drilon pointed out, he had been placed in the DBM in August 2019 despite a pending extortion case when he was earlier chair of the Housing and Land Use Regulatory Board.

On March 27, 2020, Health Secretary Francisco Duque III ordered the transfer of around P42 billion of DOH COVID-19 funds to the PS-DBM. Just two weeks after the fund was transferred—without any documentation as has been flagged by the Commission on Audit—the PS-DBM began awarding contracts to Pharmally. The contracts reached P8.6 billion from April to June 2020 alone. 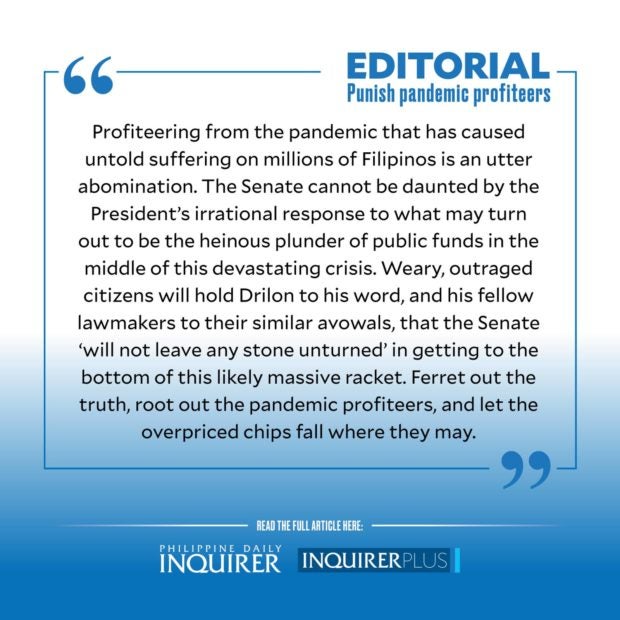 The P42 billion that was transferred represents the biggest chunk of the DOH’s P77 billion COVID-19 budget that the COA found to have “deficiencies.”

Last June, Pharmally, whose license to operate as an importer-wholesaler of medical devices was given only in January 2021 by the Food and Drug Administration, won yet another award, this time worth P744 million, for the procurement of 17,000 RT-PCR test kits for P45,550 each.

Pharmally officials were personally introduced to President Duterte in March 2017 by his former adviser on economic affairs Michael Yang.

How did Pharmally bag these contracts even if there were “significant disparities” with prevailing market prices at that time when the country was already reeling from the pandemic and the administration said it was scrounging for scarce funds?

“It seems to have been planned. If there is premeditated murder, here, we have premeditated plunder,” said Drilon. “For me, in times of the pandemic, this is treachery.” Drilon had questioned Pharmally for overpriced medical supplies as early as September last year, citing, for instance, that it sold test kits at P344,000 each when others were selling the item for P240,000.

More “kaduda-duda” details: Executives of Pharmally that were supposed to be part of the Aug. 27 hearing had given fake addresses, while another one had already left her San Juan residence.

Profiteering from the pandemic that has caused untold suffering on millions of Filipinos is an utter abomination. The President is expected to be the first to condemn any indication whatsoever that officials in his administration may have taken advantage of the dire emergency to make a buck. But on Tuesday, instead of ordering a thorough look at the PS-DBM irregularities, President Duterte spent his late-night TV address hurling personal insults at Gordon and Sen. Panfilo Lacson and disparaging the hearings, while again defending Health Secretary Francisco Duque III and even Yang. That day had also marked a grim milestone: over 22,000 new COVID-19 cases, the highest the country has notched since the start of the pandemic.

The Senate cannot be daunted by the President’s irrational response to what may turn out to be the heinous plunder of public funds in the middle of this devastating crisis. Weary, outraged citizens will hold Drilon to his word, and his fellow lawmakers to their similar avowals, that the Senate “will not leave any stone unturned” in getting to the bottom of this likely massive racket. Ferret out the truth, root out the pandemic profiteers, and let the overpriced chips fall where they may.