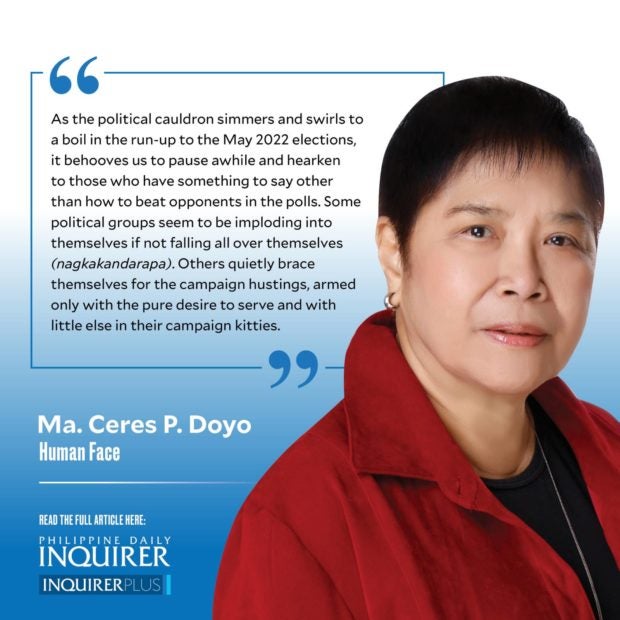 As the political cauldron simmers and swirls to a boil in the run-up to the May 2022 elections, it behooves us to pause awhile and hearken to those who have something to say other than how to beat opponents in the polls. Some political groups seem to be imploding into themselves if not falling all over themselves (nagkakandarapa). Others quietly brace themselves for the campaign hustings, armed only with the pure desire to serve and with little else in their campaign kitties.

Over the weekend, the Ateneo Alumni Association held an “online conversation” on “Fratelli Tutti” (FT), Pope Francis’ encyclical letter on “fraternity and social friendship.” It was led by Jesuit Fr. Albert Alejo, aka Paring Bert, a multi-awarded poet (“Sanayan lang ang pagpatay,” etc.), one of the convenors of 1Sambayan, anthropologist, educator, urban farmer, musical whistler, etc. (Watch his recitation of “Salot” on YouTube where he severely excoriates the powers that be who get away with murder and plunder. Your tear ducts and the pores of your skin will ooze out salty water.)

When Paring Bert asked me, some weeks ago, what in “Fratelli Tutti” (translated as “all bothers/sisters”) caught my attention, I said—trying to sound, uh, erudite—it was the Pope’s using the words from the poet Virgil’s “Aeneid”: “the tears of things” (lacrimae rerum). Tears fall when weeping, but a friend pointed out that the English word tears (differently pronounced) could also mean rips on the skin or fabric that need to be mended.

Paring Bert’s presentation should be on YouTube now. Thanks to him, my FT copy is now full of yellow highlights to guide me navigate the pages.

One of the parables told by Jesus that is in the heart of FT is that of the Good Samaritan and other characters in the story. Praise has been heaped on the Good Samaritan who stopped to come to the aid of a wounded man on the wayside while others walked away. But little praise is given to the innkeeper who, though paid, took in the victim and acted as a caregiver. Who am I in the story?

Pope Francis segues into “a better kind of politics” (Chapter 5), politics that is “truly at the service of the common good.” His lament: “The scandal of poverty cannot be addressed by promoting strategies of containment that only tranquilize the poor and render them tame and inoffensive. How sad it is when we find, behind allegedly altruistic works, the others being reduced to passivity.”

“Thou shalt not tranquilize the poor” might as well be a modern-day commandment for politicians to heed.

“Politicians,” Pope Francis says, “are called to tend to the needs of individuals and peoples. To tend to those in need takes strength and tenderness, effort and generosity in the midst of a functionalistic and privatized mindset that inexorably leads to a throwaway culture …

“Politicians are doers, builders with ambitious goals, possessed of a broad, realistic and pragmatic gaze that looks beyond their own borders. Their biggest concern should not be about a drop in the polls, but about finding effective solutions …

“Political charity is also expressed in a spirit of openness to everyone. Government leaders should be the first to make the sacrifices that foster encounter and to seek convergence on at least some issues. They should be ready to listen to other points of view and to make room for everyone …

“Politics too must make room for a tender love of others. ‘What is tenderness? It is love that draws near and becomes real. A movement that starts from our hearts and reaches the eyes, the ears and the hands … Tenderness is the path of choice for the strongest, most courageous men and women.’ Amid the daily concerns of political life, ‘the smallest, the weakest, the poorest should touch our hearts …’

“Viewed in this way, politics is something more noble than posturing, marketing and media spin … At times, in thinking of the future, we do well to ask ourselves, ‘Why am I doing this?,’ ‘What is my real aim?,’ ‘How many voted for me?’ … The real, and potentially, painful questions will be, ‘How much love did I put into my work?’ … ‘What good did I achieve in the position that was entrusted to me?’”

On another note, we await Vice President Leni Robredo’s announcement on whether or not she will make a bid for the presidency. So lovely is her photo aboard a fishing boat with fisherfolk leader Roberto Ballon, one of this year’s Ramon Magsaysay awardees. Rough waters ahead.

Read Next
A balanced view
EDITORS' PICK
WHO says no evidence healthy children, adolescents need COVID-19 boosters
Marcos-era elections: Not what his son signed up for
Over 3 Million worth of prizes to be won at Smart Padala’s SENDali Manalo Promo!
Vietnam’s ‘crazy guy’ aims to save ocean from waste
Acer starts the year off strong with the Aspire Vero National Geographic Edition
Gear up and get ready to play with Yamaha Mio Gear
MOST READ
‘Sampal sa gobyerno:’ Drilon wants unvaxxed PAO chief barred from working
Jose Manalo’s son Benj pays tribute to late mother: ‘You’re a testimony of God’s love’
Vice mayor slams Vico Sotto for turning Pasig into a ‘puro palabas’ city
Guevarra to Acosta: Obey rules on unvaccinated
Don't miss out on the latest news and information.