Divorce should be an option | Inquirer Opinion
Close
menu
search

Divorce should be an option 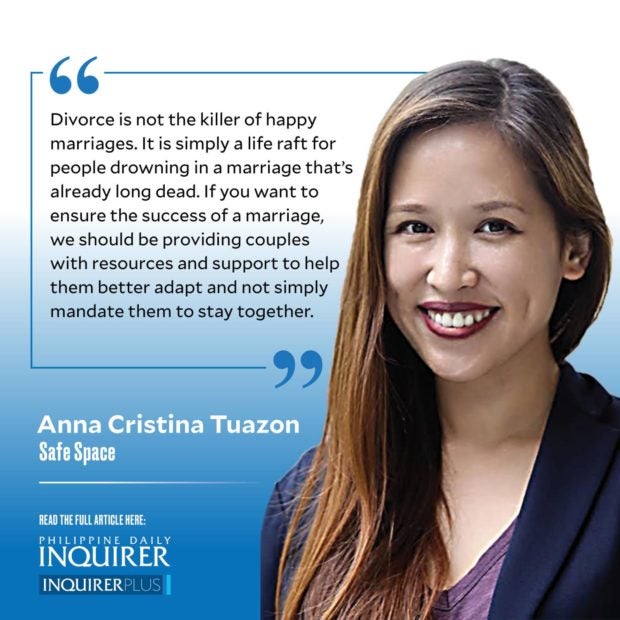 The House of Representatives committee on population and family relations approved the absolute divorce bill which allows it to proceed to plenary for debate. This is the closest we have come to finally allow people to have full freedom to decide on the course of their relationships. As a predominantly Catholic nation, this understandably will cause fierce arguments and culturally entrenched righteous indignation. However, as someone who works with families, let me offer some points on this issue.

If you as a couple do not want to consider divorce in your marriage, you don’t have to. Legalizing divorce does not threaten harmonious families. People who are happy and content within their marriages will not suddenly rush to get one just because it is available. If you worry that your spouse will divorce you the moment it becomes legal, then you have much more important things to worry about in your relationship. It can, however, save the lives of many victims of domestic violence (mostly women) and allow people to determine their own lives.

Not allowing divorce as a legal option is like not allowing emergency exits in a building. Imagine there’s a fire but the building owner didn’t put in emergency exits because he “does not believe in it” and that you were expected to keep managing the fire, not escape it. Imagine still a building infested with toxic mold but that you were not permitted to evacuate because others couldn’t fathom why you don’t have the willpower to tough it out. Most people hopefully will not need to use emergency exits in their lifetime. And you’ll be glad it’s there when you need it.

Divorce can also be a protective tool against domestic violence, which is the strongest reason why it should exist. In other countries, they found a significant reduction of spousal conflict and extreme partner violence once divorce was an accessible option. When you know that your spouse has legal rights to leave, you are disabused of the notion of your spouse as property and less likely to mistreat them. Domestic violence also takes up a significant portion of reasons for divorce, around 25-50 percent in other countries. By refusing to provide this option, you are condemning victims of domestic violence to a lifetime of hell. Not having access to options can also turn into desperation—leading some individuals to consider a lethal option.

Even without the threat of domestic violence, we should consider the natural course of intimate relationships. You can only realistically commit to a set of behaviors, not a set of feelings. You cannot genuinely promise to make someone happy. You can, however, promise to not have sex with anyone else (you can still break this promise, of course, but it is more than possible to keep). Feelings, by nature, are temporary. They can be lost and regained. They can strengthen and fade.

Love is both a feeling and an act. Love, as a feeling, can change. I do not know which Hallmark writer decided that love should be forever. The act of loving, however, is within your control and something you can choose to commit to. By accepting the nature of feelings, we must accept the possibility that we might lose the feeling of love for our spouse despite our best intentions. The act that follows this loss—whether it be active efforts to rekindle the lost feeling, redefining the marriage as platonic mutual respect, or acknowledging that the marriage is over—can still be done in a loving way. The best way to shield children from the harmful effects of separation or divorce is for both parents to commit to respecting each other and to still care for each other as co-parents. Ironically, couples who do acknowledge the wax and wane of romantic feeling are much more likely to stay together because they do not take each other for granted and make repeated intentions to stay. They also tend to be more generous and less calculative during separation and genuinely wishing each other happiness.

Divorce is not the killer of happy marriages. It is simply a life raft for people drowning in a marriage that’s already long dead. If you want to ensure the success of a marriage, we should be providing couples with resources and support to help them better adapt and not simply mandate them to stay together. If you love someone, you don’t chain them to you; them choosing to stay is a greater sense of emotional security than locking them in a divorce-less marriage.