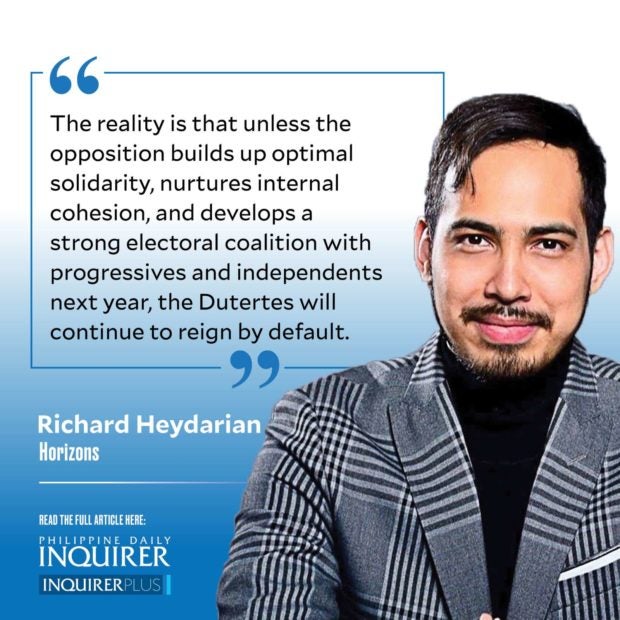 Reflecting on the inherent limits of electoral politics, the radical activist Emma Goldman was said to have warned: “If voting changed anything, they’d make it illegal.”

Witnessing the worst aspects of early 20th-century American democracy, she saw elections as nothing but a ritualized legitimization of a corrupt and decadent elite that seamlessly pitted one section of the working class against the other.

The evidence on the ground, however, suggests that elections can indeed bring transformative change. From Taiwan in the East to postwar Germany in the West, sustained periods of fair and competitive elections have brought about broadly competent, compassionate, and progressive leaders to power, thus transforming once bastions of authoritarianism into the world’s freest and most vibrant nations.

The upcoming presidential race in the Philippines, however, has given new relevance to Goldman’s cynical take on electoral politics. Instead of presenting a genuine opportunity for political change, the 2022 elections could end up legitimizing the increasingly tight grip of the incumbent coalition on Philippine state institutions.

Popular and well-resourced President Duterte and Mayor Sara Duterte could very well end up running under competing tandems, thus boxing out other rivals and turning the elections into a truly “family affair.” But let me first clarify that this all feels so 2015. Didn’t the Dutertes, both father and daughter, dominate the headlines back in the days by constantly hyping the former Davao mayor’s bid for the presidency, just for him to back out come the deadline for filing of candidacy, then for him to controversially run as replacement candidate past the 11th hour? The script was clearly a winner. But other than preelection publicity stunts, there is also an element of instinctive strategy at play here. As a consummate politician, Mr. Duterte is the ultimate master of political hedging, constantly assessing the alignment of forces before making any fateful move. In fact, his notorious self-contradictions are often a consequence of spontaneous hedging, especially once influential allies, whether in the business community or in the defense establishment, call out his excesses.

And he may also have picked up a trick or two from his “favorite hero,” Russian President Vladimir Putin, who invented the art of “tandemocracy”: namely, conveniently running under an anointed successor whenever constitutional term limits kick in. There’s also Soviet-style disinformation, whereby a torrent of contradictory statements effortlessly sows inaction among confused rivals.

At the same time, Sara Duterte has demonstrated throughout the years that she has her own mind and distinct approach to governance, something that was fully on display when her father served as her deputy in Davao. It would be mistaken to just dismiss her as the incumbent’s proxy or ignore the march of competing ambitions.

“The President, very recently, personally confirmed to me that he will run for Vice President and Senator Go as President. It was not a pleasant event,” she revealed in a strongly worded statement last week. “I respectfully advised them to stop talking about me and make me the reason for them running or not running.”

Depending on the upcoming quarterly surveys, and banking on his enduring popularity as well as emergency powers amid a raging pandemic, Mr. Duterte may indeed run under his long-time aide, Sen. Christopher “Bong” Go, next year.

Meanwhile, Sen. Imee Marcos has signaled that a potential top rival, her brother Ferdinand “Bong Bong” Marcos Jr., is open to “a marriage made in heaven”—a joint ticket under Sara, who has consistently led the surveys on presidentiables since last year. Thus, a race between the Duterte-Marcos and Duterte-Go tandems next year is not entirely unthinkable, reflecting the stunningly narrow nature of political competition these days.

How did we end up here?

For years, I’ve wondered how powerful it would be if all prominent liberal figures and strong women—Vice President Leni Robredo, Sen. Leila de Lima, Maria Ressa, former chief justice Maria Lourdes Sereno, former Ombudsman Conchita Carpio Morales, among others—assembled under one roof (either virtually or/and in flesh) and displayed a united front before countless Filipinos seeking a credible alternative to the status quo.

The reality is that unless the opposition builds up optimal solidarity, nurtures internal cohesion, and develops a strong electoral coalition with progressives and independents next year, the Dutertes will continue to reign by default.