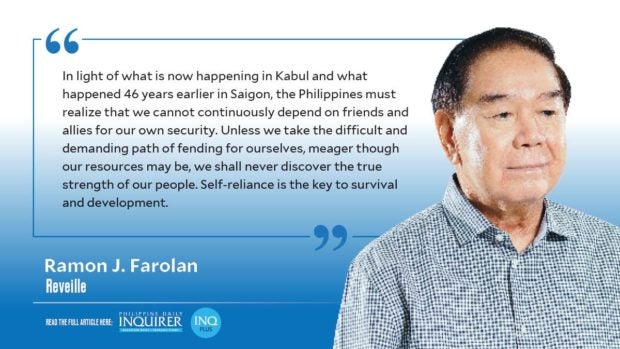 During the French colonial period, the city was known as Saigon and was often referred to as the “Paris of the Orient.” Its streets were named after French military leaders and the most famous was Rue Catinat, the Champ-Élysées of the city. With the withdrawal of the French, the street was renamed Tu Do or Freedom Street. In 1976, the government of a unified Vietnam honored the Vietnamese national hero by naming the city after him. Tu Do became Dong Khoi.

Saigon holds some bittersweet memories for our family. After serving as commissioner of tourism for almost eight years, my father Modesto Farolan was appointed ambassador to South Vietnam and Cambodia by President Diosdado Macapagal. He replaced Ambassador Trinidad Legarda, one of the first lady ambassadors in the Philippine foreign service. During his stint in South Vietnam, one of his granddaughters would be born in the Saigon Adventist Hospital; a son is buried in Saigon’s national cemetery.

In the early 1960s, there were a lot of Filipinos working in South Vietnam. Some were private entrepreneurs, others were contract workers with foreign companies, some were married to Vietnamese women and a number worked for the Central Intelligence Agency (CIA) or its front organizations. In his Pulitzer Prize-winning book “A Bright Shining Lie: John Paul Vann and America in Vietnam,” author Neil Sheehan had this observation about the use of Filipinos by the CIA: “The CIA was notorious for hiring Filipinos to staff its Asian operations because they were so Americanized. Their presence in an office or a maintenance shop announced that the CIA owned the place.”

In March 1965, US involvement in Vietnam drastically changed with the landing of 3,500 US Marines of the 9th Marine Expeditionary Brigade in Da Nang. The Marines in full battle gear, were met by Vietnamese girls with leis, standing along a large sign that read: “Welcome, Gallant Marines.” Their mission was to secure the airbase at Da Nang and thus free more South Vietnamese units for combat operations against the Viet Cong. By the time of the 1968 Tet Offensive, there would be close to half a million US troops in the country. But as television brought the war into the living room of Americans, and with body bags of dead soldiers arriving in increasing numbers, US public opinion gradually turned against the war.

The Paris Peace Agreement of 1973 called for the withdrawal of US combat forces from Vietnam. It was the beginning of the end. By late April 1975, North Vietnamese tanks were at the gates of the presidential palace in Saigon as the greatest helicopter evacuation in history was taking place at the US embassy. In his book “The

Nightingale’s Song,” Robert Timberg, a 1964 US Naval Academy graduate and award-winning journalist, gives a riveting account of the last day of the war: “On April 29 as North Vietnamese rockets bombarded the Saigon airport, US Ambassador Graham Martin ordered the emergency evacuation of Americans and South Vietnamese facing imprisonment at the hands of enemy troops poised on the outskirts of the city. The next day and a half ranks with the most ignominious episodes in the history of the nation. Panic gripped Saigon. Television pictures shot by intrepid, diehard cameramen showed Americans and South Vietnamese on the roof of the US embassy clambering helter-skelter aboard helicopters while other Vietnamese clung to the skids as the choppers lifted off. Mobs of Vietnamese desperately tried to scale the wall of the embassy grounds in hopes of finding a safe haven or joining the general exodus.”

It was Ambassador Martin who continued to direct the evacuation, determined to save as many Vietnamese as possible. Finally, he was ordered by President Gerald Ford to leave the embassy on the next helicopter. Holding the American flag, he boarded one of the last choppers to lift off heading for a ship at sea. Robert MacFarlane of the National Security Council reported to his boss Henry Kissinger that Martin was out. His first thought after the events of the day was that “the US in throwing in the towel, had crippled its credibility as a reliable ally.”

In light of what is now happening in Kabul and what happened 46 years earlier in Saigon, the Philippines must realize that we cannot continuously depend on friends and allies for our own security. Unless we take the difficult and demanding path of fending for ourselves, meager though our resources may be, we shall never discover the true strength of our people. Self-reliance is the key to survival and development.