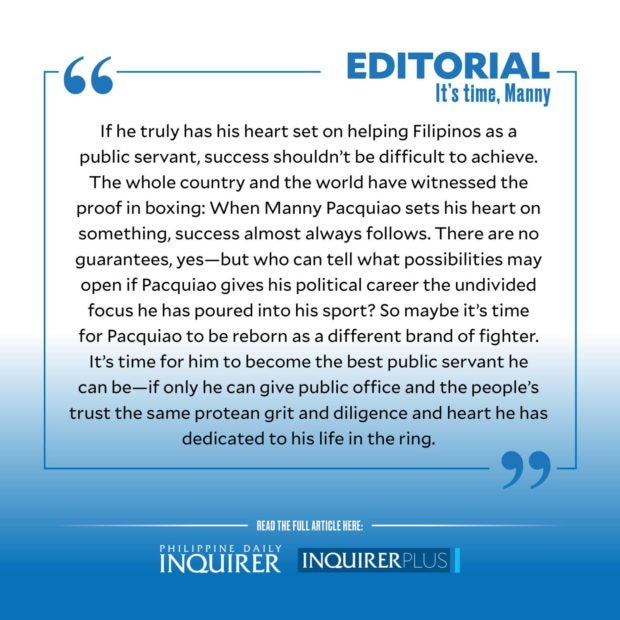 An athlete’s retirement is a decision only an athlete makes. Athletes never asked to be subbed during those long, lonely hours of training, when the pain and punishment of rigorous repetition were numbed only by the desire for excellence.

Why, then, should the decision to retire be made by a chorus of proxies?

So this is not a call for Manny Pacquiao to retire. Consider this, instead, as an invitation to a rebirth.

Pacquiao’s recent defeat to Cuban Yordenis Ugás exposed the Filipino ring icon for what he truly is at this stage of his career: a 42-year-old legend shuttled

Thus the clamor for his retirement.

Trainer Freddie Roach was right about two things: One, “I hate to say it, but this could be it.” Two, “But that’s really up to him.”

Most of those calling for Pacquiao’s retirement are worried about his health. One punch is all it takes to cross the threshold of how many beatings the body and brain can

absorb before it suffers irreversibly debilitating effects. But maybe retirement is not the word for what Pacquiao needs to do. Maybe this would be the perfect time to refocus his efforts on a different fight. Maybe this is the right time for Pacquiao to lace up his gloves for his political battle.

There are those who say Pacquiao has no business being in politics, that his acumen isn’t at the level of the statesmen who have come before him.

Antonio Trillanes IV said of Pacquiao: “While he’s extremely popular, he’s generally perceived as an intellectual lightweight. I don’t mean that in a degrading way,

whatsoever. But that’s how he’s being perceived.”

Those who agree with such a view may have forgotten where Pacquiao’s journey began.

Wesley So said, in rationalizing his switch to American citizenship, that the Filipino society isn’t the right environment for those chasing sporting immortality. That happens to be true. “I did not have the connections to succeed in that culture,” So once lamented, citing the country’s “godfather” culture that offers walkways to glory only to those with connections.

Manny Pacquiao was the kind of “nobody” So described as having no chance for success. An urchin who often found himself sleeping in street corners, with only carton boxes between his skinny body and the cold pavement, Pacquiao’s only connections were the ones he could hammer out with his jab-straights.

Surely, a former baker’s assistant had no right to dream of fighting in neon-lit Las Vegas’ grandest arenas or of one day living in swanky Forbes Park. Lacking powerful “padrinos,” Pacquiao certainly had no ready-built path to becoming the only boxer—male or female—to win world titles in eight divisions.

And yet he achieved all of that. Who is to say that such success cannot be extrapolated to his political career, when applied with the same single-minded doggedness?At 42, Pacquiao is politically young. In politics, he is perhaps at the same stage of progress as when he was a scrawny 16-year-old pro in boxing. Maybe he can blitz past political foes someday the way he punished opponents across weight lines.

The presidency? Maybe that’s Pacquiao’s Oscar De La Hoya. But if he is intent on getting there, maybe he should begin first with his Sasakuls, his Ledwabas, his Sanchezes, his Barreras, and his Moraleses. It was spectacular victories over these foes that led him to megarich duels with De La Hoya, Ricky Hatton, Juan Manuel Márquez, Miguel Cotto, and Floyd Mayweather Jr.—matches that cemented his legend globally.

It was clear that his boxing and his politics were difficult to mix seamlessly. One would always take the backseat. And often, it was the sport that took the wheel. The loss to Ugás may be a chance for Pacquiao to shift his priorities.

“I’m not political but I am a public servant. I spend even my own money to help people,” Pacquiao said after the fight. “I want to go back to the Philippines; there’s a lot of things I want to accomplish. I want to help my people, especially now with the pandemic going on.”

If he truly has his heart set on helping Filipinos as a public servant, success shouldn’t be difficult to achieve. The whole country and the world have witnessed the proof in boxing: When Manny Pacquiao sets his heart on something, success almost always follows.

There are no guarantees, yes—but who can tell what possibilities may open if Pacquiao gives his political career the undivided focus he has poured into his sport? So maybe it’s time for Pacquiao to be reborn as a different brand of fighter. It’s time for him to become the best public servant he can be—if only he can give public office and the people’s trust the same protean grit and diligence and heart he has dedicated to his life in the ring.