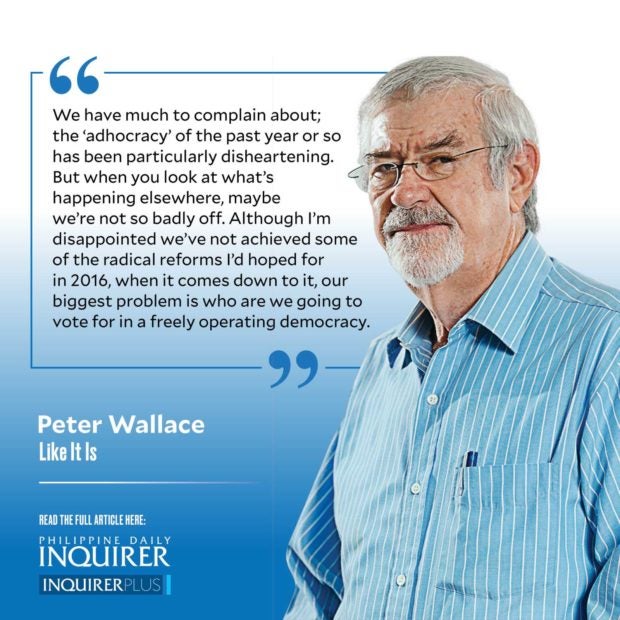 We complain: Government was too slow to respond to the COVID-19 threat, and how it’s been handled has been questioned, particularly some of the strange ad hoc decisions of the Inter-Agency Task Force for the Management of Emerging Infectious Diseases. (I’ve no idea why we need a face shield, when no one else does). The economy has been gravely set back.

But look around. The US is riven by dissent, with its very democracy at risk from idolization of a dangerous idiot, and with thousands of needless deaths due to irresponsible Republican leaders.

In Europe, demonstrations are clogging the streets as citizens oppose the requirement of a vaccination pass or the restrictions on their freedom, as they see it. In the UK, Prime Minister Boris Johnson has been heavily criticized for his government’s unpreparedness and mismanagement during the early months of the pandemic.

Early this year, some 100,000 people protested across Russia against the arrest of opposition leader Alexei Navalny. The Russian government responded by arresting 3,700 people. Then in April, another 1,700 protesters were jailed after participating in a large demonstration calling for the release of Navalny.

Violent demonstrations and looting erupted in South Africa in July of this year following the decision of former president Jacob Zuma to turn himself in and serve 15 months in prison for contempt of court after he refused to appear in a corruption inquiry. The death toll from the protests reached more than 300.

In Cuba, thousands rallied in July to protest the shortage of food, medicine, frequent power outages, and the government’s mismanagement of the pandemic. More than 500 Cubans were arrested following the protests.

Thousands of people in Brazil also went to the streets to protest the government’s poor response to the pandemic, including alleged corruption in the purchase of vaccines.

In Colombia, people took to the streets in April to initially protest a tax reform proposal, which has been withdrawn since by the government. The protests intensified mostly due to accounts of riot police brutality and human rights abuses that left more than 60 people dead.

Freedom of expression is under assault in Turkey. According to an estimate by the Human Rights Watch, 87 journalists and media workers are either in pretrial detention or serving sentences for terrorism offenses.

Lebanon has no government. Its currency has fallen 90 percent against the dollar. Over 50 percent are in poverty. There’s no fuel, and blackouts can be 20 hours per day for hospitals that are full. It’s in an economic crisis.

Closer to home, Afghanistan has fallen into ruthless Islamic control as the Taliban has taken over Kabul. Hundreds will die. This is seen to stifle people’s freedom, particularly women’s rights. They will force women into a subservient role, with a huge decline in their education and freedom.

Thailand has been experiencing large-scale, youth-led demonstrations since last year, demanding reforms in the country’s political system and constitution. The protesters have been calling for the resignation of Prime Minister Gen. Prayuth Chan-ocha, who is also accused of mishandling the pandemic. It’s an unstable situation.

Myanmar, too, has been taken over by the armed forces. According to Human Rights Watch, police and soldiers have killed more than 1,000 people, including children, since the military takeover in February. Democracy is no more.

Malaysia is experiencing a political crisis. Its embattled Prime Minister decided to resign from office together with his Cabinet after failing to secure majority support and facing public backlash over his government’s poor COVID-19 response.

Hong Kong has lost its democratic space; it is now ruthlessly controlled by China. As of end-June, 117 people, including journalists, students, and activists, have been imprisoned under a draconian national security law.

I think you get the point. We have much to complain about; the “adhocracy” of the past year or so has been particularly disheartening. But when you look at what’s happening elsewhere, maybe we’re not so badly off. Although I’m disappointed we’ve not achieved some of the radical reforms I’d hoped for in 2016, when it comes down to it, our biggest problem is who are we going to vote for in a freely operating democracy.

TAGS: complaints vs government, COVID-19 response, government adhocracy, Like It Is, Peter Wallace