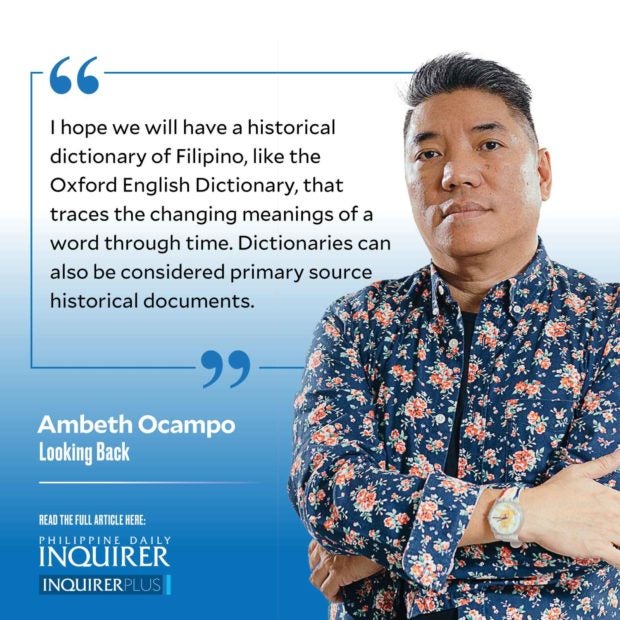 Buwan ng Wika always reminds me of an undergraduate research paper I wrote on the origins of “bad words” in Filipino. Like the name of God, these words were not taken in vain, they were reserved for cursing when angry or stressed out. So unspeakable were these words that many were purposely left out of dictionaries.

After leafing through the standard references: Vicassan Pilipino-English Dictionary (1978) compiled by Vito C. Santos (son of Lope K. Santos) and Diksyunaryo Tesauro Pilipino-Ingles (1969) by Jose Villa Panganiban, I discovered the 1860 Vocabulario de la Lengua Tagala compiled by the Jesuits Juan de Noceda and Pedro de Sanlucar. This was probably the first rare Filipiniana I held in my hands, and it looked really old being bound with pig-skin covers. Half the book was printed on sturdy white paper, the remainder in inferior paper that crumbled with rough handling. The book provided hours and hours of fun.

This vocabulario, like many before it compiled by religious in 16th and 17th centuries, or the early years of the Spanish contact, were uncomfortable with anatomical terms. While almost all Tagalog words had their Spanish equivalent, anatomical terms were rendered in Latin. Otin, for example, was rendered as “membrum virile, verbum inhonestum” (male member, a dishonest word). Latin made the definition sound scientific. In addition, it did not teach the natives the vulgar Spanish equivalent. Puqui was translated as “Pars vaerenda mulieris verbum turpissimum” (Female member, a very bad word). Surprisingly, in old Tagalog, a distinction was made depending on the age of the woman: puqui referred to a mature woman’s private parts; puquiqui (pars verenda puellae) referred to the member of a girl; while puquingquing referred to the genitals of a female infant or child.

From 1860, it took 153 years till the work was republished by the Komisyon sa Wikang Filipino (KWF) in 2013. For a generation separated from their past because of language, the KWF publication is a welcome translation made under the able direction of National Artist Virgilio S. Almario. Tracing the editions further, we reckon 259 years from the 2013 KWF-Almario edition to the first edition of the vocabulario printed in 1754. Actually, Noceda and Sanlucar stood on the work of those before them. Their vocabulario can be traced to another published by Francisco de San Jose in 1610, the entries from A to D were contributed by

Miguel Ruiz, entries for M, N, NG, and O were contributed by the Dominican Tomas de los Reyes who was rector of Letran from 1684-1686. Then there was the Czech Paul Klein, better known in Manila as “Pablo Clain” (pronounced cla-in), who put all these together and it was from his notes that the 1754 Vocabulario by Noceda and Sanlucar was constructed.

Going through early Tagalog vocabularies (and those of other Philippine languages) shows us how language and meanings developed. Some dictionaries preserved how words were used, sometimes even clips of poetry now lost to us. Bangongot meant a bad dream or a nightmare. In one vocabulario the usage given was: “nananangongot ang demonio sa aquin,” (the devil is giving me nightmares), “binangongot ng demonio ang asaua ni Pilates” (the devil gave Pilate’s wife a bad dream), “nabobongongotan aco mandin nang pagsonod cosaiyo” (my following you is a nightmare). Otot was defined as a fart, a word with a bad sound, and the example provided was “para cang otot lamang sa kanya” (you are only a fart to him).Bacla (today spelled bakla) did not originally refer to a gay or effeminate man or boy. In the Pasiong Mahal, nabacla was used to describe Christ agonizing in the Garden of Gethsemane. Christ was not gay or cowardly, rather he was “confused.” Nabacla by the way was also used to describe rawness from scratching. I hope we will have a historical dictionary of Filipino, like the Oxford English Dictionary, that traces the changing meanings of a word through time.

Dictionaries can also be considered primary source historical documents. Antonio Pigafetta did not just leave us with a narrative of the Magellan expedition and the first voyage around the world, he noted down words he heard in Cebu in 1521. In these words, we not only learn meanings and usage but in them, we get a glimpse into the pre-conquest Philippines and the culture of Filipinos at the Spanish contact.

Read Next
Countering misinformation to save lives
EDITORS' PICK
Legarda emphasizes role of ICC/IPs in nation building this IP month
USAID Opportunity 2.0 calls for applicants for grants for out-of-school youth engagement
Pharmally scandal: When middlemen profit even during a pandemic
Work-From-Home is here to stay and requires reliable logistics
DOTr to defend proposal to increase passenger capacity in public transport
The crisis within: Suicides rise as COVID takes its toll on lives, livelihood
MOST READ
Bongbong says PH should modernize infrastructure to become Asia’s next logistics hub
PDP-Laban’s Cusi wing inks coalition deal with Reform Party
Robredo on vote buying: That might be taxpayer’s money so accept it, but vote based on conscience
Karen Davila’s son survives second full-blown seizure, now well
Don't miss out on the latest news and information.