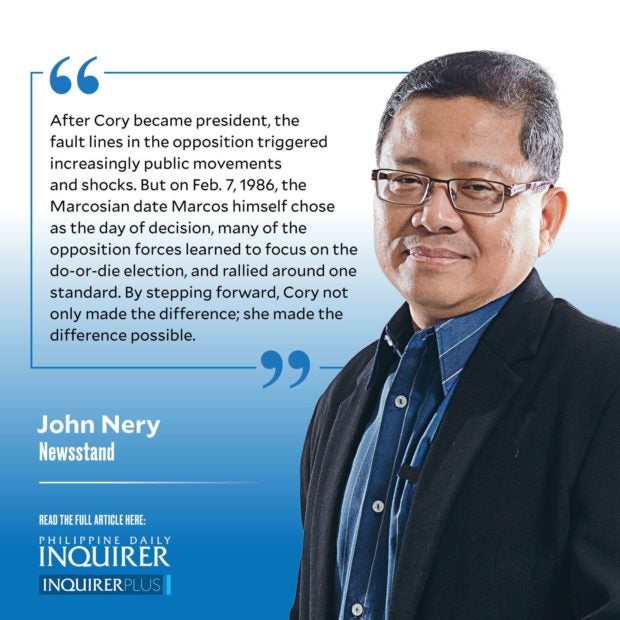 Even after the assassination of opposition leader Ninoy Aquino, and especially his funeral procession, shattered the last remaining pretensions of the Marcos regime to genuine popular support, the anti-Marcos opposition wasn’t united. The focus on fighting the dictator’s regime was common to all—but that fight was not understood, or fought, on the same terms.

In May 1984, for instance, less than a year after the Aquino assassination, opposition forces were split on the issue of the first regular elections for the Batasan Pambansa, the parliamentary centerpiece of Marcos’ new constitutional order. Should the opposition field candidates even though the odds were long and the voting process was likely rigged? Cory Aquino campaigned on a pragmatic note: participation without illusion, she said. Some other opposition leaders,

including one of the most formidable of them all, the “old man” Lorenzo Tañada, called for a boycott of the legislative elections. Among those who joined his campaign: Ninoy and Cory’s only son, Noynoy.

Even when the unexpected victory of opposition assemblymen, like Hilario Davide Jr. of Pusyon Bisaya of Cebu and Homobono Adaza of the Mindanao Alliance, resulted in the minority expanding its ranks to about a third of the Batasan, giving it a measure of legislative leverage for the first time, not everyone opposed to Marcos saw the electoral struggle as an effective means, or even a valid strategy, to fight the regime. In the 1986 Snap Election, when Marcos himself was on the ballot, National Democratic forces continued to boycott the electoral process—a fateful decision that led to consequential rethinking within the movement in the aftermath of Marcos’ ouster.

But even Cory’s place at the head of the opposition, as its standard bearer, was not assured. Doy Laurel was the leader of the traditional political opposition in the Philippines; he welcomed Ninoy back to the Philippines and, a few days later, Cory too, in his capacity as the opposition leader who stayed home. When Marcos announced that by the powers vested in him by his own constitution, he was calling an unscheduled election, Laurel believed that he had the legitimacy to contest the presidency on behalf of all the opposition.

In hindsight, his commitment to what was called the freedom struggle was genuine, his capacity to do the hard work of campaigning against an ailing dictator unquestionable. But to many of us filling the aisles and corridors of the so-called parliament of the streets, Laurel was marked by the fatal sign of compromise. He retained the sprawling and strategic province of Batangas as his political base even in the depths of military rule; surely, or so we thought, this could only have been by arrangement? We knew Marcos remained loyal to the memory of Laurel’s father, who was the Supreme Court justice who caused the young Marcos’ cinematic acquittal on a murder charge. That was (always) true, but that the province of Batangas was neglected during the Marcos years, precisely as punishment for Doy Laurel’s political preeminence, was also true.

It had to take Jaime Cardinal Sin, the archbishop of Manila, to convince Laurel in December 1985 to cede what he must have perceived as his responsibility to run for the presidency, to the widow of the man whose killing had eventually forced Marcos to reclaim a public mandate.

But the ranks of opposition leaders included many others, whom politicians, or Aquino insiders, or Church leaders, or activists, saw as just as compromised as Laurel. Ernesto Maceda and Luis Villafuerte Sr. had served in Marcos’ Cabinet; they ended up serving in Cory’s first Cabinet, too. Monching Mitra was a key political player, trusted by leaders like Tañada or the publisher Chino Roces. But to many in the opposition, his friendship with Danding Cojuangco, Marcos’ closest crony, made him an always suspect figure.

Even before the defection of Juan Ponce Enrile and Fidel Ramos, the opposition forces which eventually coalesced around Cory Aquino when she ran against Marcos in the snap election was already a Big Tent: It included the leaders Ninoy himself looked up to, such as Jose Diokno and Jovito Salonga, and representatives of new or reemerging forces Ninoy did not know about. It included human rights lawyers like Joker Arroyo and Rene Saguisag, and anti-Marcos firebrands like Nene Pimentel and Bobbit Sanchez, who advised Cory—but it also included the most influential members of the business community, personified in the charismatic and influential Jimmy Ongpin.

After Cory became president, the fault lines in the opposition triggered increasingly public movements and shocks. But on Feb. 7, 1986, the Marcosian date Marcos himself chose as the day of decision, many of the opposition forces learned to focus on the do-or-die election, and rallied around one standard. By stepping forward, Cory not only made the difference; she made the difference possible.